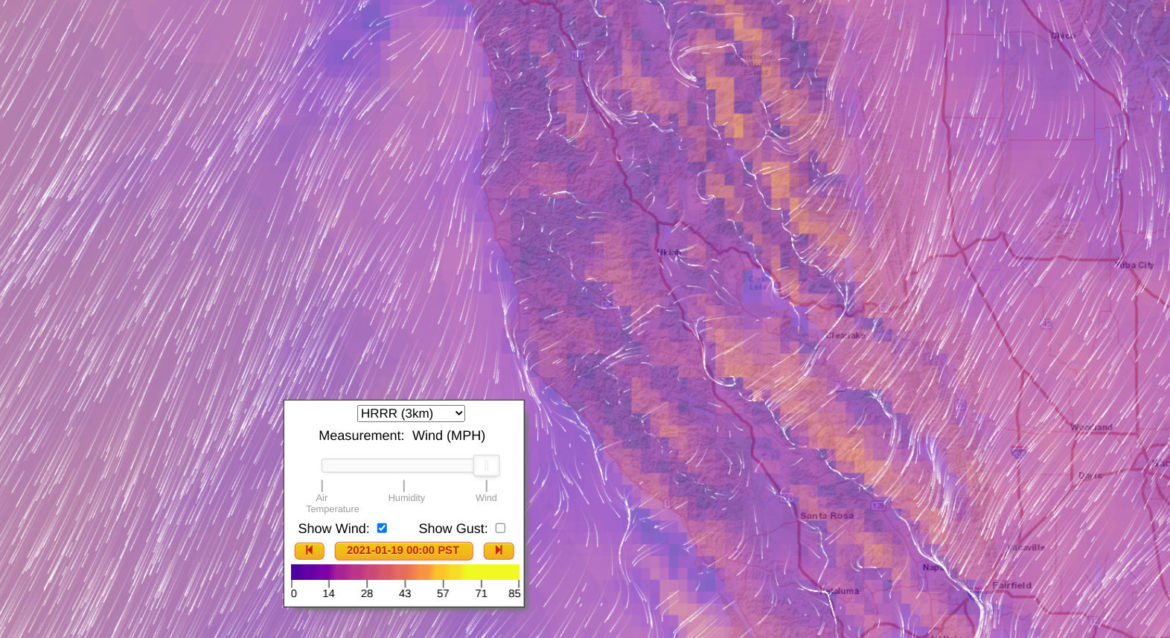 UPDATE 1/19/21 — The high winds overnight pushed multiple fires in the Santa Cruz Mountains, and other parts of the Central Coast, even in the burn scar of the recent CZU Lightning Complex fire. A truly unprecedented even for mid-January.

ORIGINAL
WILLITS, 1/18/21 — January 18 seemed more like a pleasant fall day in most of Mendocino, with warm, dry weather displacing the usual cold grey of the North Coast winter. Same day temperature records were broken across the state and an unseasonable bout of fast dry winds bore down, resulted in PG&E performing it’s first ever January preemptive power shut-off — and the National Weather Service (NWS) declared a red flag warning along the Central Coast. Tonight is expected to see the strongest winds, but more wind is expected Tuesday night.

In recent days high winds and summer-like conditions have resulted in a slew of winter-wildfires across the state — and the North Coast is not exempt. Strong winds have damaged power lines across the region, and Pacific Gas & Electric warned that even in areas far from the planned power shut-off, which struck the Sierras region and the Central Coast, power outages were probable due to downed lines. At The Geysers power plant, a geothermal plant in northern Sonoma County, a wildfire broke out, likely connected to downed power lines.

The circumstances around the fire are eerily reminiscent of the Kincade Fire, which broke out at the same location during high winds, and forced the evacuation of about a third of Sonoma County. Tonight’s fire, the Old Fire, has remained small at around 10 acres, and seems to be under control.

From a global perspective, 2020 was the second warmest year on record, just slightly cooler than 2016 which holds the record. But it looks like 2021 is on track to be yet another warm one on our rapidly warming planet.

Mt. Diablo saw wind gusts of over 70 mph, and even San Francisco saw 50 mph, according to the NWS.