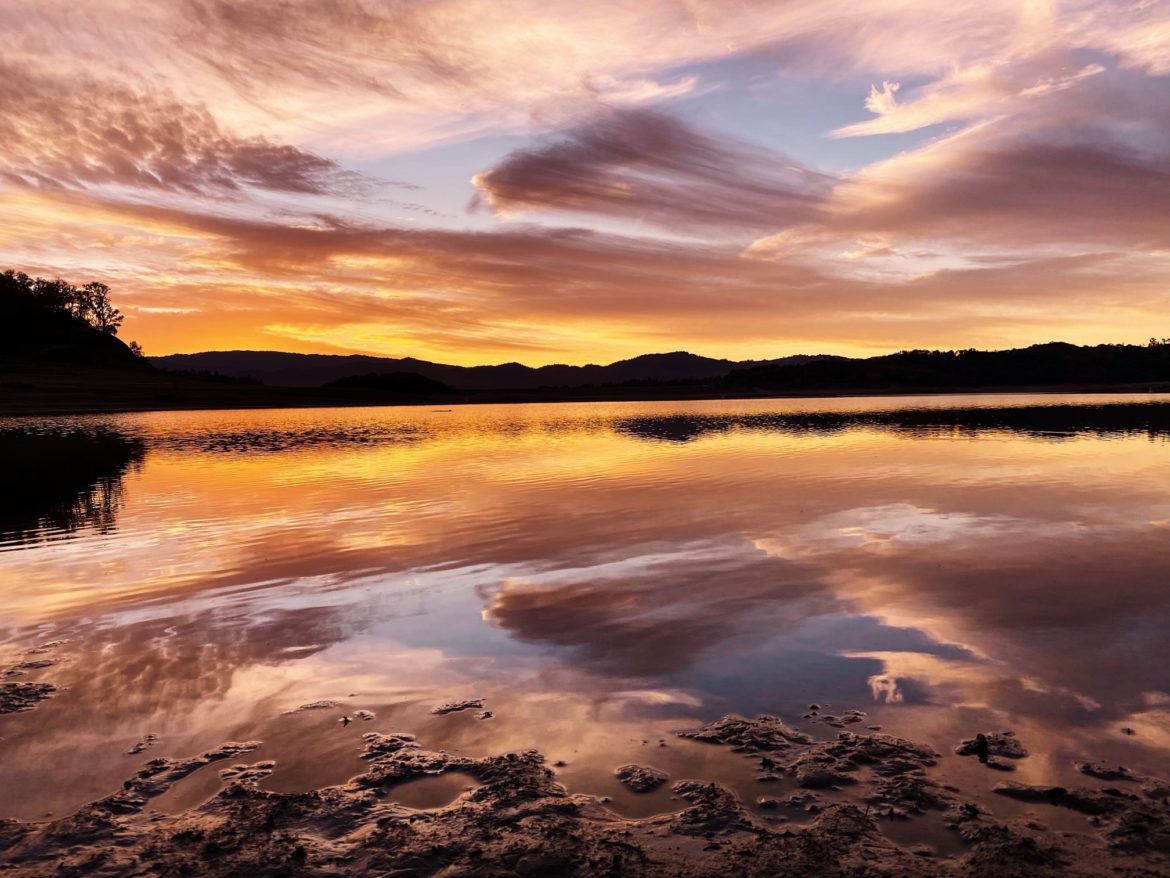 LITTLE RIVER 1/6/2021 — Last water year was the third driest on record in the upper Russian River watershed. In downtown San Francisco, the 2020 calendar year was the second driest since record keeping began in 1850, and forecasts are showing a dry January on the horizon.

Needless to say, we may be barreling towards drought in 2021, which could lead to curtailments in water use like we saw in 2014. That year, entire municipalities lost their access to water. In anticipation of this, prominent leaders and water managers of the Mendocino County Farm Bureau, Russian River Flood Control, and the City of Ukiah have banded together to advocate for local interests in the case of a water shortage.

In December, the group, the Mendocino County Water Resiliency Task Force sent out a press release introducing themselves and their mission — to make sure local knowledge and needs are taken into account as the California State Water Resources Control Board develops a management plan for the upper Russian River and draws a blueprint for how water will be allocated in a drought situation. The task force has an ambitious plan to get local water users to agree to lower their water usage to avoid curtailments. “We want a pre-emptive agreement to end curtailments or a process of curtailments we agree with,” said Sean White, director of sewer and water for the City of Ukiah and member of the task force.

The issues that the resiliency task force are setting out to tackle today in inland Mendocino are just a small window into a statewide predicament. Across California, discussions are brewing and conflicts are simmering over who has the greatest need and the most preeminent right to use the state’s water, as well as who should make decisions over where the resource should go, who gets it, and when.

These questions have been growing for years from a root problem: The way the state’s water infrastructure is currently set up, California can’t distribute as much water to every community as they are used to receiving to support their residents, towns, farms, and businesses in severe drought situations.

One narrative about these California water woes is that the state is running out of water. But a policy expert who spoke with the Mendocino Voice said that’s not the problem. “The idea that California is running out of water is a myth,” said Jeffrey Mount, senior fellow at the nonprofit, non partisan Public Policy Institute of California Water Policy Center. Mount claimed that California actually has plenty of water, largely because the state is good at managing demand and adapting to scarcity, and is continuing to get better at it. The issue at hand, the one the task force ultimately is responding to, is that water is not distributed evenly across the states almost 164,000 square miles and 40 million residents.

“Scarcity is hardest on rural communities and even harder on rural agricultural communities,” said Mount. A lack of diversification, infrastructure, storage, and connection between water basins makes it difficult for rural communities to get the water they need when the resource is running short and improving upon all those things is expensive.

Statewide, an over-allocation of water rights, bustling metropolises far from water resources, and climate change induced droughts, among many other factors, have sped up and heightened this situation.

Water year 2019 to 2020 was the third driest in recorded history in the upper Russian River watershed, so it’s not hard to imagine that without significant rain this winter and spring, that water could become sparse. If water levels get low enough, the California State Water Resources Board may come in and issue curtailments on water use in the Ukiah Valley. Basically, the state will assess the amount of water available and then, if they deem it necessary, say who can use it and how much. The Water Resiliency Task Force says they want to make sure that they understand how the water board is making those decisions so that they can participate in the process and advocate for the needs of Ukiah Valley water users.

But in the meantime, they urge water users to start preparing for the potential of limited water resources in 2021.

“Shortages are absolutely in the forecast without big rainfall,” said Elizabeth Salomone, general manager of the Russian River Flood Control and Water Conservation Improvement District. Salomone, along with other leaders on the task force recommend storing early, and topping off storage now.

Members of the task force first caught wind of the state’s plans to respond to drought in the Russian River watershed this past summer, during an upper Russian River Water Managers meeting. According to meeting attendees, the California State Water Resources Control Board presented some of the models they would use to track water use and availability, and ultimately make decisions regarding curtailments.

“While they didn’t really talk about any impending doom, it was somewhat implied,” said Sean White about the control board’s presentation. At the meeting, the state water board asked local water leaders to start thinking proactively about water conservation. The Water Resiliency Task Force was born in response to this request.

Ultimately, the task force hopes to avoid limits on water use in the Ukiah Valley altogether, explained White, but if that isn’t possible, they want to work with the state to come up with a process that all parties can agree is fair. Mainly, they want to address how water is allocated when supply runs low. Currently, the California water code dictates that water gets handed out based on seniority, which creates for very uneven distribution. When there is a drought, some people and some communities get all the water they’re used to and others get none at all. The Water Resiliency Task Force doesn’t think that’s the best way to manage water in the upper Russian.

“End goal would be to fairly allocate resources,” said Devon Jones, executive director of the Mendocino County Farm Bureau, a group which works to protect agricultural interests in Mendocino County. “We don’t want the whole burden falling on one group.”

Of course, the best case scenario is that the dry start to the rainy season will change course, and that the region will be spared this predicament altogether. However, they have to be prepared for the worst. “I wish I had a crystal ball that could tell me what would happen,” said Jones. “But right now it’s more like I have a magic eight ball that says ‘try again later’.”

Learning from the water shortage of 2014

As you may remember, we’ve been here before.

Back in 2014, Lake Mendocino reached an all time low and the Russian River below it became little more than a trickle. As the Press Democrat reported that year, the Redwood Valley County Water District cut off around 200 farmers, prioritizing water for residential customers. Additionally, the state water control board temporarily stripped multiple municipalities of their right to divert water, recalled Sean White, who was the general manager of the Russian River Flood Control and Water Conservation District at the time.

The line between who got water and who didn’t was drawn based on seniority, dictated by the Water Commission Act of 1913. Under the act, which is sometimes referred to as appropriative rights, water is handed out on a first come-first served basis. What that means today is that when water runs short, users who claimed water before 1914 (have senior water rights) get all the water they are accustomed to, where those who claimed water after 1914 (junior water rights) can get cut off entirely.

This matter, of some people getting cut off entirely, is one of the main things that the Water Resiliency Task Force is grappling with. They want all water users to agree to conserve water by a certain amount so that nobody has to be cut off entirely.

“Water resources need to be managed more appropriately with equal distribution and conservation,” said Devon Jones, director of the Mendocino County Farm Bureau and member of the task force.This is a pretty ambitious idea, as it would mean that senior water rights holders, who usually wouldn’t get cut off at all, would have to make a sacrifice not required by law in order for everyone to have access to some water.

The task force hopes that if there are curtailments this year or any year in the future they will be done differently than they were in 2014, which was the first time the state went through with water cuts in the region. They are vying for greater local input in the decision making process and a fairer system of cuts, if cuts at all. Members of the task force said they think it’s crucial they are having these discussions now, because even if our region manages to squeeze through another drought year without water shortages, this problem isn’t going away, in Mendocino, or in California. Additionally, the allocation of water is no simple topic, and figuring out a way to make everyone agree on how to manage the vital resource is not likely to be easy.

“Even if we reach a local agreement we would need to reach an agreement with the state [Water Resources Control] Board,” said Salomone of Russian River Flood Control. “It’s good that we’re starting to establish a relationship now.”