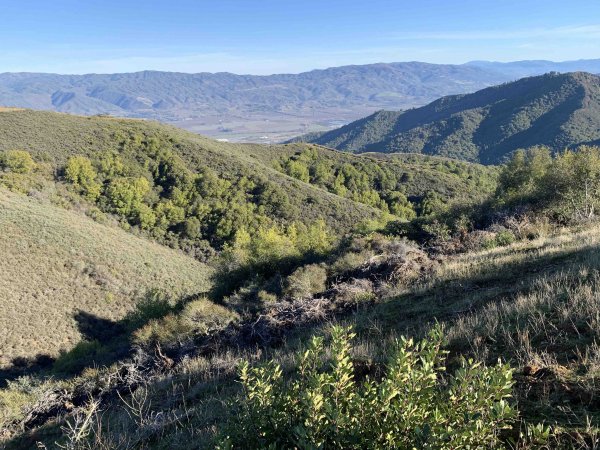 LITTLE RIVER 1/14/2020 — The western hills above Ukiah have been Dave Hull’s stomping ground since he was a little kid. On free days, Hull and his friends would grab their bikes and adventure out into the open space together, exploring the land covered with golden grass and spotted with towering redwoods. As an adult, the 56 year old Hull bought a portion of that land which he had used as a giant playground as a child. And at the end of 2020, he donated 188 acres of that hillside land to the City of Ukiah, with the goal of preserving it for conservation and recreation forever.

The parcel Hull handed over to Ukiah has a perennial stream that houses endangered steelhead and majestic redwood trees that are crucial to the local ecosystem. “It’s really a pristine piece of land,” Hull said. “I fell in love with it from the day I saw it.”

Now that piece of land belongs to the city, so ultimately, to the public. The parcel, which is just outside of city-limits, includes some of Doolan Canyon and the ridge adjacent to it. Maya Simerson, project and grant administrator for the City of Ukiah, said that the local government hopes to use the land to create and maintain fuel breaks to protect the city from fire, for conservation, and for recreation. “One of our priorities as a city is to preserve as much open space as possible,” said Simerson. “It’s very much appreciated that this private land owner [David Hull] donated the land. It will benefit the entire community.”

The parcel is not yet open to the public, but Simerson said she hopes to open the land up for public use in the next year or two. “We would love to be able to have a trail system,” said Simerson. The City is working with the Ukiah Valley Trail Group to explore designing trails, but since trails can only be built in the dry season, on the ground work can’t begin immediately.

Ultimately, the City wants to expand upon this parcel and acquire more land. Simerson said they hope to gain grant funding to lock in as much as 800 acres of open space in the western hills for the entire community to enjoy.