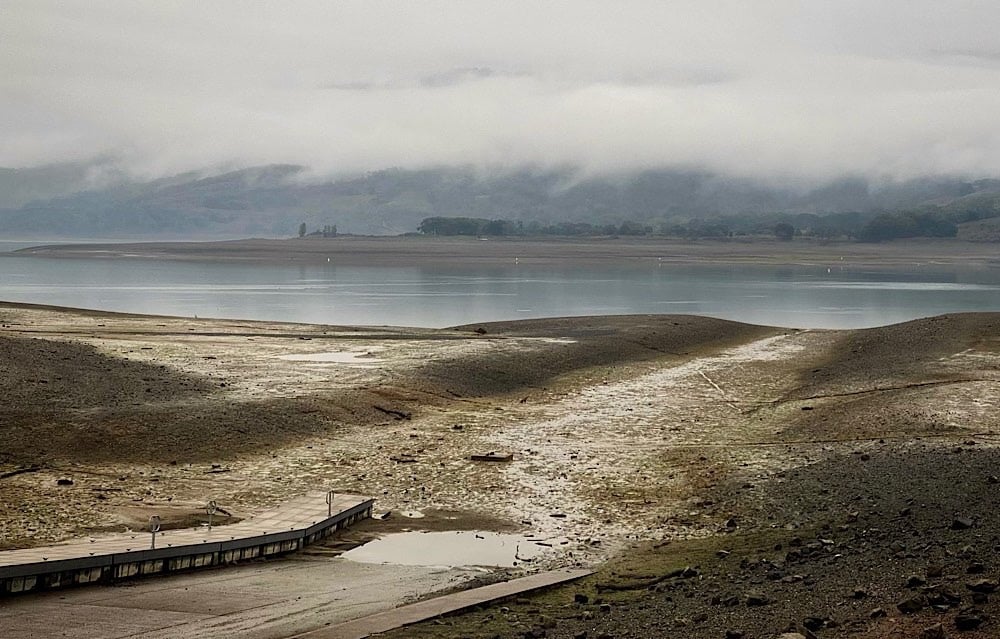 A boat ramp at Lake Mendocino. The Lake was at historically low levels as of January 13, 2021. (Jethro Bowers / The Mendocino Voice)

LITTLE RIVER, 1/13/2020 — So far, the 2020 – 2021 rain year hasn’t brought much precipitation to write home about, and according to National Weather Service meteorologists, we shouldn’t get our hopes up for rain in the near future.

The Mendocino Voice spoke with Josh Whisnant, meteorologist at the National Weather Service in Eureka, about what precipitation patterns are likely to look like in the near future. He said that overall, things are looking dry.

There is a high pressure ridge sitting over the Pacific Ocean that will stay put till at least the end of the weekend. High pressure ridges bring warm, dry air to the region. Essentially, for precipitation to form, air and moisture must move upward into the atmosphere. Then, the moisture condenses, turns to clouds, and comes down as rain or snow.

High pressure systems push air down towards the surface of the earth, so precipitation can’t form. High pressure ridges settle just off our coast all summer. That’s why it doesn’t rain for the whole season. When high pressure systems settle off the coast in the winter, they stop the rain then too. Whisnant said that winter ridges in themselves are not abnormal, they often arrive after storms, but that this one is particularly strong for the winter season.

Looking slightly farther into the future, the end of January and beginning of February are forecasted to bring even drier, warmer weather. Whisnant said, “The [National Weather Service] Climate Prediction Center shows January 23 to February 25 trending towards below normal precipitation and above normal temperature.” Beyond that, the future is unsure. “Anything past 14 days I wouldn’t put much stock in,” Whisnant said.