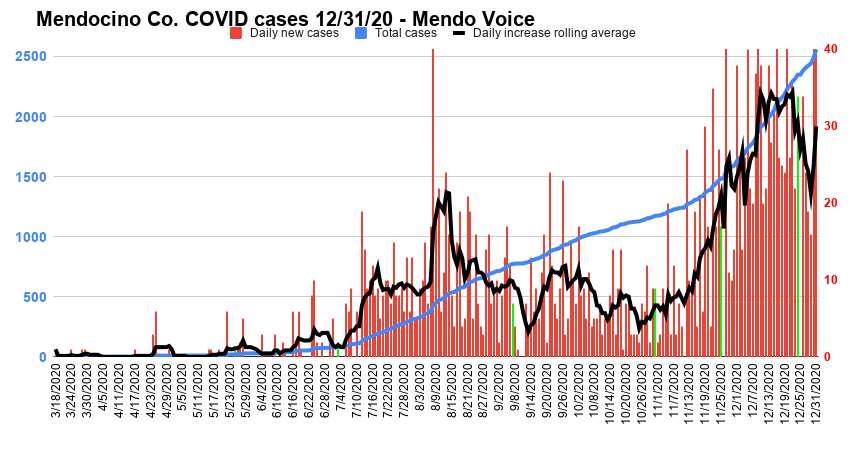 This graph shows total case count on the left axis. On the right axis are the daily new cases, as well as a 7 day, lagging, rolling average of daily increases. The green bars are holidays, beginning on the left with Memorial day, then Independence Day, Labor Day, Halloween, the day before Thanksgiving (no numbers were available on Thanksgiving), and Christmas Eve. So far a fairly obvious pattern of surges following holidays is evident.

MENDOCINO Co., 1/1/21 — The people hoping that the end of 2020 would mean a end to the tribulation of that terrible year woke up to rough news today, as the COVID-19 surge continues to tear through California with case numbers surging hire than ever.

Dr. Fauci’s warnings of surges upon surges appear to be coming to fruition as the Thanksgiving surge is compounded by a Christmas surge. In Los Angeles mortuaries and funeral homes have run out of space, oxygen and essential anesthetics are running out, and fire departments and paramedics have begun to warn that they might be stretched too thin to assist people who fall ill or are struck by an accident.

Thankfully, Mendocino has so far been spared the worst of the surge harrowing the rest of the state, though the county is reviewing its mass casualty plans:

Indeed, ours is the only region that has managed to avoid the stricter locked down that could be triggered by low ICU capacity numbers. As of today the state’s website indicates that the Northern California region, which includes Mendocino, Lake and Humboldt counties, but not Sonoma County, retains 33% of ICU beds open. This number would normally be horrifyingly low, but in the COVID era, it’s a rare bright spot.

While, we’re not in the stricter regional lockdown we remain well into the “purple zone.”

Still, as the rest of the state surges, our exceess ICU capacity is likely to be eaten up by transfers. The County of Mendocino warned on Twitter two nights ago that in Mendocino County only five ICU beds remains open at that time.

Here in Mendocino County New Year’s Eve saw the highest single day spike in new cases with 71 new confirmed positive tests. Though the raw number on the day after Thanksgiving was higher, that day included two days of data given that no information had been released on Thanksgiving.

Indeed, yesterday’s number were nearly enough to reverse the the downward trends of the Christmas period. As even Governor Newsom had noted in one of his press conferences, the period leading up to and just after Christmas had seen a plateau in case numbers across much of the state, and even a drop in some places.

As is clearly visible in the graph below, Mendocino County saw a dramatic surge beginning around Halloween and peaking mid-Dec, daily new cases even went down at the end of December. However, in more recent days it appears that there’s a new surge. Why this is is unclear. It’s possible that testing went down somewhat during the holiday season, but it’s also possible that we are now entering a new surge based on Christmas travels.

Deaths are also increasing. Notable here is time period between deaths. During the summer surge people were sometimes dying of COVID daily in Mendocino County. As this graph shows, that time has once more narrowd down to a couple days between deaths.

Below are the remainder of our graphs.