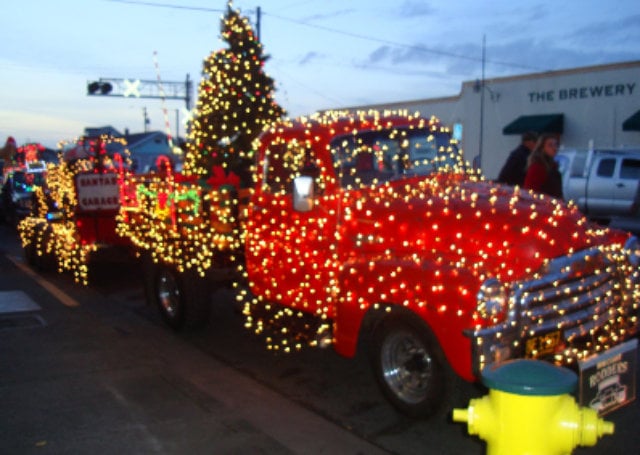 FORT BRAGG, 12/2/20 — After a 2020 full of disappointing event cancellations, one of the Mendocino Coast’s marquee annual fun days, Fort Bragg’s Lighted Truck Parade, is ready to roll this coming Saturday at 6:30 p.m. Add to that the “Lit Boat Parade” in Noyo Harbor on Sunday, and Fort Bragg’s Christmas season is about to be a bright spot in what is otherwise shaping up to be a dark winter of pandemic surge and mass quarantine.

Organizer Steve Wells said the lighted truck parade, which started decades ago with lighted logging trucks, is likely to have a different flavor this year. Wells has gotten applications from people on bicycles, three wheeled bikes, people walking and dirt bike riders, along with the usual holiday light-draped trucks and floats. Wells says the event will continue to be non-political and non-partisan. Political messages are being refused, with the event meant to provide a Christmas-holiday feel, he said. Wells is in charge of the event with Nor Coast Rodders, the co-sponsor of the event with the city. He is also the Fort Bragg Fire Marshall.

From the World’s Largest Salmon Barbecue to Paul Bunyan Days to the Mendocino 4th of July Parade, the Coast’s other marquee events have been the victims of COVID-19 cancelations this year. Festivals celebrating wine, crab, music, movies and more were all axed. The whale festival was sliced in half by the arrival of the pandemic, leaving the town mostly event free since March.

But is the Christmas fun safe? There has been some criticism on social media of holding the Lighted Truck Parade during a time of the worst surge yet in COVID-19 cases, among a much louder chorus of support for the event.

The city has worked with the county health officer and taken extra precautions to insure COVID-19 safety. “City Manager Tabatha Miller spoke with Mendocino County’s Health Officer, Dr. Andy Coren, who agreed that with COVID-19 modifications, the event could take place,” a press release from the city states.

The main modification is to exchange a downtown loop for a long straight route starting on the north end of town. This year, the route will be staged and start on the west side of Cypress Street near the south entrance to Noyo Headlands Park, turn left onto Main Street and continue north, then turn west onto West Elm Street, where the parade will end.

“The longer parade route will allow households to watch the parade from their cars along the route. Please note that to encourage families to watch from their vehicles, there will be no road closures, so please take precautions,” the city press release said.

Changes to county health orders, or state level restrictions, before Saturday could still cancel or curtail the event. Wells said the city is in charge of the event and is working with health authorities on any new orders.

“We just have to hope for the best. I think it’s as safe as it can be,” said Wells, referencing the social distancing, masking and other changes made for safety. Masks are mandatory during staging, on the floats, and for anyone observing from outside their own vehicle.

An even safer option is to watch the parade live on the City of Fort Bragg’s Facebook page. The Lighted Truck parade entry fee has been waived in order to encourage more businesses, churches, organizations, clubs and others to participate. There will be no noisy announcing stand this year. The announcing stand in past years has housed the judges, an announcer and local radio.

The Lighted Truck Parade, led by the fire department, starts with a drive-through candy cane giveaway and canned food drive at the Fort Bragg fire station at 141 Main Street from 2 p.m to 5 p.m. People can drive in and someone will be there handing out bags of candy. The parade itself begins at 6:30 p.m.

Due to COVID-19 precautions, the fire department had to cancel one of its biggest and most popular annual events this year, the annual neighborhood candy giveaway. The ceremonial lighting of the Christmentas Tree in downtown Fort Bragg has also been canceled.

The Lighted Boat Parade was started in 2008 by Jim McDannold, who rowed solo that year and participated until 2014. In recent years the women’s rowing team from the Traditional Small Craft Association have been the stars.

“Unfortunately we can’t take the TSCA rowboat out this year because social distancing is not possible,” said organizer Heather Baird, of what is now called the Lit Boat Parade.

“We called it that as a joke and I thought this year we would call it that for real, to give people a laugh,” said Baird. There is a parking lot under the Noyo River Bridge where people can enjoy the parade. The Lit Boat Parade is hosted by the “Misfit Mariners of Mendocino” and is not affiliated with the city or the Lighted Truck Parade.

“We had 5 to 6 boats in the parade last year which was a record number. Several of the boats are participating again this year, and with crab season on hold, I’m hoping for a few more to join in the fun,” Baird said.

“Lit boats can just show up and join in, the launch time is sunset from the south harbor launch, then out to the bridge for a few donuts and back through the harbor.”

Christmas fun got rolling on Nov. 28 with a drive through Santa at the CV Starr Center, where candy canes were handed out and kids got to tell Santa their wishes through the window or drop mail in the North Pole mailbox outside. Letters, which Santa will return, can be dropped off through Dec. 16. Santa was back at CV Starr on Dec. 2. The Mendocino Coast Recreation and Parks District also will bring Santa to the South Coast for drive through events. He will be at Point Arena City Hall from 2-4 p.m on Dec. 12 and the Gualala Community Center from 11 a.m to 1 p.m also on Dec. 12. On Christmas Eve the MCRPD’s Facebook page will host virtual storytime with Santa. The City of Fort Bragg is also helping promote local holiday shopping through its online gift guide, featuring photos of products ranging from alder wood smoked albacore in Cosmo’s Tuna Cans from Princess Seafood to Old Rasputin beer from North Coast brewing to houseplants from Ficus and Fern, one of Fort Bragg’s newest businesses. Click on the single product on the page and it takes one to that businesses website