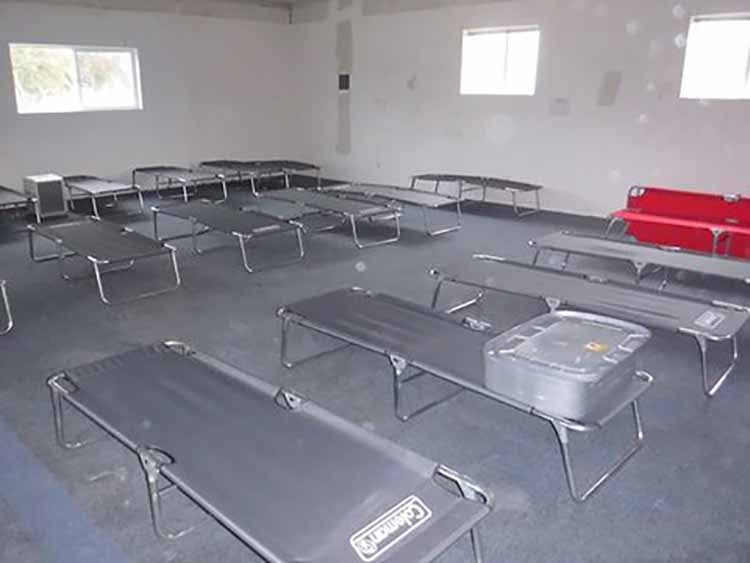 Cots at the Ukiah winter homeless shelter in December of 2016.

FORT BRAGG, 12/6/20 — As days get shorter and nights colder, Fort Bragg still hasn’t found a place to establish its usual winter shelter. Homeless people who have no place to sleep are spending their nights walking around Fort Bragg and Mendocino or huddled under bridges, or in camps in the woods. To make things worse, the non-profit Mendocino Coast Hospitality Center (MCHC) has announced it can’t open the winter shelter even with a location, due to an inability to find qualified staff. MCHC had planned to open a winter shelter on Dec. 1.

This dismal situation could all change as early as January if the Fort Bragg City Council makes the decision to help at their special meeting this Monday night. At that meeting, the City Council will consider having the city lease part of the closed C.V. Starr Community Center to MCHC for the months of February and March — an action recommended by its Ad Hoc Homelessness Committee. The proposal is likely to be controversial, as issues involving the homeless and MCHC usually are in Fort Bragg.

In addition, the city will consider whether to boost the pay of MCHC’s winter shelter employees by as much as $4 per hour for “pandemic hazard pay.” The current wages range from $14 to $16 per hour for overnight supervisors and up to $20 per hour for the boss, according to online information about the jobs. The cost to the city of the wage subsidy and lease would be about $15,000, city documents state.

If the Hospitality Center can find the seven staff members they need, the shelter will open in January at a location not yet disclosed, said Carole White, president of the MCHC board. The winter shelter is scheduled to end at the end of March, but was extended last year for several months due to the COVID-19 pandemic.

As darkness fell on a relatively warm Dec. 4 with the thermometer at 49 degrees just after 5 p.m, two unsheltered men walking the streets of Fort Bragg were interviewed.

Walking past the Fort Bragg Food Bank was a 25-year-old man who left Indiana in June driving a bus, with the goal to come to the California Coast and live by the beach. He made it to Fort Bragg but things haven’t been easy here.

“Sleeping outside isn’t that bad,” he said.

He wasn’t sure where he would sleep the night. Sometimes his bed is a recycling or garbage bin.

“The garbage bins are better because the bags are softer,” he said. A trim, powerful man with a large heavy pack and several layers of clothes, he looked ready for any adventure.

He had not heard about plans for a winter shelter and wasn’t sure he would utilize the service. He has used the Hospitality Center for phone calls and other services and likes what he has seen.

Whether or not there is a winter shelter, unsheltered people are out there in 2020, occupying alleys or even dumpsters. Estimates of the homeless population of Mendocino County from point in time counts have varied between 800–1200 over the past several years. The Marbut Consulting report of 2018 estimated the homeless population of Fort Bragg to be 81 people inside city limits, but estimates have gone as high as more than 200, when the surrounding areas are included. Robert Marbut, controversial locally, later became Donald Trump’s homeless czar. Lots of homeless people never use any shelter. Some homeless people can’t be around lots of other people, some won’t go to the Hospitality Center and some can’t stand to be indoors, MCHC board president White said. For most, sleeping outside in frigid temperatures is a nightmare.

On the opposite end of Fort Bragg near Harvest Market, a 51-year old man was concerned about his safety outside at night. He said he knew where he would sleep that night but never tells anyone his sleeping spot. He grew up in Ukiah and worked his whole life there. After the Ukiah man lost his job due to COVID, he came to the Coast to stay with relatives but that didn’t work out. “Sleeping outside is great on a camping trip when you are a kid. At my age, it hurts all the way to the bone,” he said. He also hadn’t heard about plans for a winter shelter, but would definitely use it. The man was thin, carried nothing with him and was lightly dressed, although all in black.*

The Council special meeting is on Monday, Dec. 7, starting at 6 p.m, to be held by Zoom. The Council’s ad-hoc homeless committee, which has recommended the rescue plan to the full council, includes Vice Mayor Bernie Norvell and Councilperson Jessica Morsell-Haye working with City Manager Tabatha Miller.

Fort Bragg already has a year-round homeless shelter, so why is the Coast Winter Shelter needed?

The Coast’s winter shelter is intended as overflow for the usually full facilities of the Mendocino Coast Hospitality Center. MCHC can house a total of 45 people, with 17 people now fitting into MCHC’s Hospitality House at 237 N. McPherson and the rest in various transitional housing programs, White said. She said there were 17 people currently wait-listed to be housed in a winter shelter, if only such a shelter existed. While only 17 people are currently able to shelter at Hospitality House, the MCHC provides outside meals, showers and laundry facilities for anyone else who needs them at no charge. The MCHC also provides housing navigation, vocation and wellness programs at the Hospitality Center on Franklin Street, in addition to access to mail delivery for those with no address, plus access to a phone and computer.

For the month of December, MCHC says it will be able to offer motel vouchers to a small number of homeless families and individuals at higher risk of COVID-19 complications.

Many critics have asked why the winter shelter cannot be held inside the headquarters in the Old Coast Hotel at Franklin and Oak Streets downtown, which currently houses a cafe, mental health services and administrative offices. There have already been objections on social media to the C.V. Starr idea, many focused on the MCHC’s offices as being better suited.

“We thought about it. Could we do this here? We really wouldn’t be able to because of COVID,” said MCHC board president White. Much of the interior is too narrow to set up socially distanced cots, she said. People live upstairs, as part of the mission of the MCHC. Much of the overall space is taken up by an outdoor courtyard in the center of the property.

“People have this story in their heads about how big it is. It’s really not, it’s all broken up,” White said.

Others say the winter shelter should be located in the industrial areas of Fort Bragg such as the north end of North Franklin Street or in the area on the south end of town housing the local hospital, medical buildings and other nonprofits. The city and MCHC both report making exhaustive searches and only coming up with two possible properties outside those owned by the city, although those have not been identified.

The Council’s Ad Hoc Homeless Committee considered the gymnasium inside the old recreation center in city hall, but that was ruled out due to the impact it could have on downtown businesses.

“At a time when we have seen many small businesses close, the burden of hosting a Winter Shelter in this district is too much to ask of our businesses. We depend on those businesses to attract visitors and support our tax collections,” the committee’s recommendation to the Council states.

Homeless issues and the MCHC have been consistently controversial in Fort Bragg and in area media. Officials investigated whether a new provider of homeless services could be found, but came up with no other options for the 2020–2021 season. The MCHC has been willing to provide intake for the Winter Shelter if another entity were to run the facility, White said.

Last season, a winter shelter was rotated between houses of faith all winter, ranging from 8 to 24 people. The city’s permit allowing the shelter to operate contains many conditions and there are rules such as that guests are not allowed to bring drugs or alcohol into the winter shelter.

MCHC employees would drive the homeless people from where they sign in at 5 p.m. to the winter shelter. Last year, clients signed in at the Fort Bragg Food Bank, allowing the process to be taken out of downtown into the industrial area. Due to COVID-19, that won’t be possible this year. Check in will be at the Hospitality Center in downtown, an idea which has raised renewed criticism. The guests would be awakened early and driven back to the Hospitality Center no later than 8 a.m. This year, MCHC officials say the operation of the center will be much more difficult, due to COVID-19. Extensive cleaning will be required under the proposed plan. Much effort must be made to make sure that same supplies go to the same clients each night to avoid spreading COVID — something made difficult by the fact that the same people rarely show up one night to the next, White said.

The C.V. Starr Center is in a residential neighborhood and located next to an elementary school.

“We have a very quiet, low crime, tight-knit neighborhood, and have an organized neighborhood watch. I see trouble right now,” said Junice Gleason, who lives near C.V. Starr.

“At least downtown there are garbage receptacles and public restrooms. I do not feel it will sit well with a lot of my neighbors. I understand the need, but consider the consequences,” Gleason said.

The city’s report says a winter shelter has been operated successfully in residential neighborhoods in the past.

“Most of the faith-based facilities are in residential neighborhoods and with proper permit and lease conditions, interference with the neighbors is minimal. Any activity at the school and district offices[sic] to the south[sic] would happen between 8:00 am and 5:00 pm. The shelter hours would be limited to 5:30 p.m. to 7:30 p.m and shelter guests would be transported to and from the Center,” the recommendation to the council states.

Gleason sees special problems with the CV Starr property, where the skate park continues to operate.

“I just do not feel mixing our homeless population and our at risk teens is a very good idea. I’m for protecting the kids on that stance,” Gleason said.

Guests are supposed to stay inside or around the entrance, in an area of CV Starr away from staff offices. When this reporter worked at the winter shelter last year, the guests almost all were exhausted and went to sleep right after dinner. There were disabled people and several elderly people, along with those suffering from mental health or with substance abuse issues. I saw fellow staff perform what appeared to be lifesaving acts for ill and disabled people and the guests mostly work hard to help, rather than cause problems.

A rate increase for Waste Management’s Fort Bragg residential, commercial, multifamily and roloff services will also be on the agenda for Monday’s special meeting.

* Both homeless men interviewed provided their names but we have withheld for their own privacy.