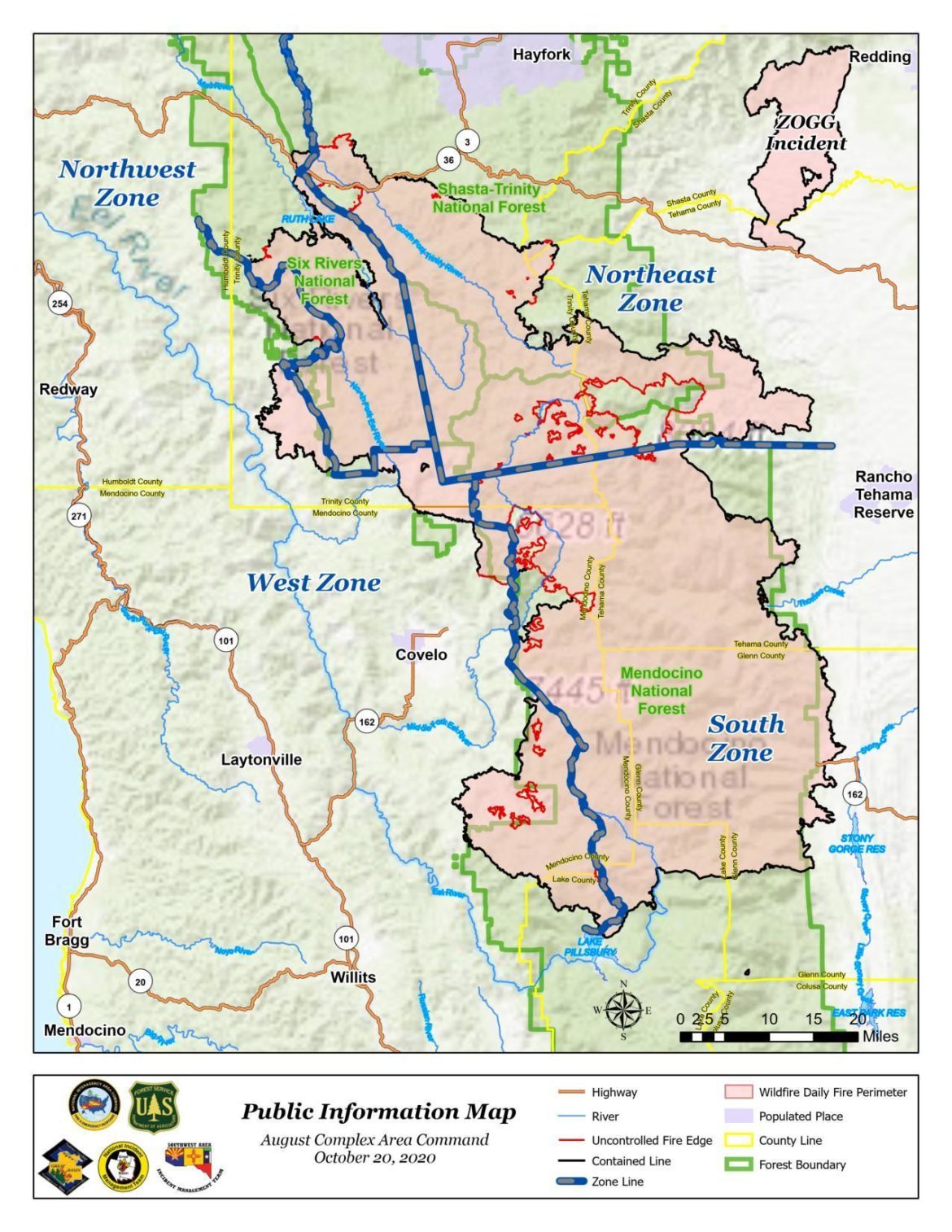 MENDOCINO Co., 10/27/2020 — Howling winds up to 40 miles per hour, humidity as low as 1%, and warm, 80 degree weather all arrived simultaneously in areas of Northern California on Sunday and will continue through this afternoon. Yet, despite extreme fire-weather conditions, the August Complex containment lines all held, and the fire is now 93% contained.

The Complex, which is the largest fire in California’s recorded history, ignited in mid-August during the statewide thunder and lightning storm. Since, it has grown to over one million acres and infiltrated six counties.

Red flag conditions in the  fire area are expected to continue until 5 p.m. today, according to a press release from Mendocino National Forest.

As fire weather challenges containment lines, some which have been two months in the making, 578 personnel are working to bolster protections against fire spread by removing hazardous trees and focusing on priority areas.

One of the few areas left on the whole complex that is not contained is Hellhole Canyon, east of Covelo. According to the press release, the terrain in that region is too treacherous for firefighters to interact closely with the fire. Firefighters are working around that difficulty by constructing lines on ridges above the Canyon so there is already a first line of defense if the fire moves out of the canyon.

Although the fire seems to be winding down, there are still signs of surface fire, creeping, and smoldering, according to the latest Forest Service Inciweb report. All of the fire movement, including consumption of heavy fuel and duff, has been taking place within the containment lines.

Fire managers are using infrared technology that detects heat signatures at precise locations so that firefighters can immediately address any areas that threaten fire containment. All zones are continuing to mop up and patrol lines. They do not expect any fire growth. “There really hasn’t been any change due to the weather,” said North Zone Public information officer Dan Bastion.

Here is the press release from the Forest Service:

WILLOWS, Calif. – Oct. 27, 2020 – Red flag conditions with strong wind gusts continued to test the containment lines on the August Complex South Zone Monday. At times, the northeast wind blew up to 40 mph and the humidity dipped into the single digits, dropping as low as 1% at Mendocino Pass. This is an extremely dry air mass over the fire area, and it is expected to continue until Tuesday at 5 p.m.

Additional personnel arrived at the South Zone Monday bringing the total number of people to 224. The fire crews continue to focus on removing hazard trees, conducting fire suppression repair in priority areas and breaking down berms near containment lines. The South Zone remains at 499,827 acres and 90% containment.

The area of the fire that is not contained is in the Hellhole Canyon east of Covelo. This steep, dangerous terrain is not a safe place to have firefighters engaged directly with the fire. Instead, crews have worked to construct firelines on a ridge where suppression actions could be taken if it moved out of the Canyon. They have also been assisted by a helicopter dropping water on the fire when activity increases.

Throughout the duration of the August Complex, fire managers have been using distributed real time infrared (DRTI) and fire imaging technology to support wildland firefighting operations and decision making. DRTI is a packaged product which provides infrared (IR) video to frontline operators and near- real time perimeter maps to incident command planners.

WEATHER: The red flag warning is predicted to end Tuesday at noon. The temperature will be in the 70s, humidity around 15% and northeast wind up to 20-30 mph.

FIRE RESTRICTIONS: In the interest of the safety of firefighters and visitors to the national forests in the Pacific Southwest Region, fire restrictions were extended to October 30 to prevent further fires from being started and overtaxing the resources of those fighting existing wildfires. Please be extra cautious with any activity that could spark a fire. One less spark means one less wildfire.