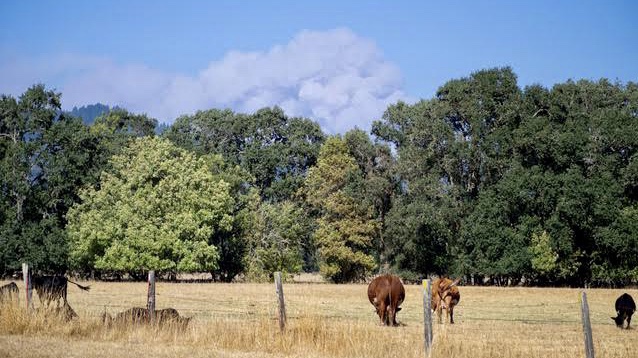 A large smoke plume as viewed from near Willits in the Little Lake Valley. The smoke is coming from the one of the fires of the August Complex. Sept. 4, 2020.

UPDATE, 9/4/2020  — The August Complex grew 10,000 acres yesterday, having consumed a total of 298,629 acres of land in and around the Mendocino National Forest, though it remains 23 percent contained. Also still in place is the evacuation warning for all portions of the National Forest within Mendocino county north of Hull Mountain, as the fire continues to move west.

The fire appears to be growing substantially with the warmer weather and large smoke plumes and pyrocumulus clouds were visible as far west as the coast. The complex has taken a notable spot as the fourth largest inferno in recorded California history, after the 2018 Mendocino Complex, the SCU lightning complex, and the LNU complex, in that order.

The northwestern bulge of the Doe Fire, the main fire that comprises the August Complex, near Anthony Peak is around 15 miles east-northeast of Covelo.

The Hopkins Fire, a relatively small fire located in the northwest corner of the complex, about 25 miles northeast of Covelo, is now 9,402 acres. According to the Forest Service’s September 4 news release, more resources have been allocated towards the Hopkins, including equipment, hotshot crews, and aircrafts.

Hot and dry weather moving into the region this weekend is predicted to make firefighting more difficult than it already is. Temperatures will reach triple digits at lower elevations.

August Complex public information officer Kimberly Kaschalk says firefighters are working hard on the ground to make sure they are prepared for the temperature spike and change in wind direction.

According to today’s news release on the complex, forecasters predict that the wind will shift from a southwesterly (coming from the southwest) to a northeasterly (coming from the northeast). The wind will essentially make a 180 switch in direction sometime Monday. This will likely increase fire activity. This combined with the extremely high heat has resulted in a forecast of potentially dangerous fire weather and the National Weather Service has issued a fire weather watch in the area already burning, and other parts of eastern Mendocino County.

“They’re trying to utilize this time to make sure they’re prepared for the wind shift,” said Kaschalk. Firefighters are fortifying their lines in preparation of the weekend weather.

August Complex operations are encouraging firefighters to pay attention to what they need and take care of themselves as the heat sets in, staying hydrated, resting, taking a break when need be. “Heat is always going to be a problem,” Kaschalk noted.

UPDATE, 9/3/2020, 7:10 p.m.  — The August Complex, which has now mostly combined into one massive fire, is at 287,106 acres, up from 242,941 acres yesterday, and with this new growth has attained the dubious status of being the fourth largest wildfire in recorded California history, and is expected to keep growing.

Though the fire remains roughly 15 miles east of Covelo, it stretches all the way from Tehama County in the north to Lake County in the south, roughly 35 miles north-to-south as the crow flies. The western flank of the fire stretches for dozens of miles of open fire line with little control — and with extremely high heat, and potential strong northeasterly winds expected this weekend, the Mendocino County Sheriff’s Office has issued an evacuation warning for all parts of Mendocino County within the Mendocino National Forest:

An Evacuation Warning has been issued for all Mendocino County Areas within the Mendocino National Forest north of Hull Mountain.

This action is necessary to address the fact that numerous private in-holdings (cabins, primary residences, and undeveloped private lands) exist within the boundary of the Mendocino National Forest.

Instructions:
Be prepared to leave. If you feel unsafe, do not wait, leave immediately. Monitor media and Nixle. Do not call 9 1 1 for information. Call 9 1 1 for life-threatening emergency only. Use safest evacuation route possible.

August Complex public information officer Anne Grandy said much of the new acreage is actually the result of better mapping and new information, rather than physical growth. Yesterday, helicopters flew over the fire and recorded what they saw, including about 40,000 acres that had not yet been measured. Those 40,000 new acres could have started burning any time in the past few days.

At this enormous new size the fire is now the forth largest in modern state history, after the still active LNU Lightning Complex, the still active SCU Lightning Complex, and the 2018 Mendocino Complex — which all local readers will be familiar with. That three of the four largest fires in state history are currently burning is astounding in itself — but fire experts and meteorologists are now worried that the August Complex may burn steadily to the west and surpass the Mendocino Complex as California’s largest recorded fire.

The complex is now 23% contained. Firefighters were able to finish containment lines along the southwest side of the Doe Fire, near Lake Pillsbury, yesterday.

The complex, which was originally 37 separate lightning strike fires, has now become just one major fire, the Doe Fire, which is 276,615 acres. The Tatham, Glade, and Hull fires were all absorbed by the Doe over the past few days.

Very hot and dry weather is expected to move into the Complex region over the next few days. Temperatures will reach the triple digits and relative humidity will be in the single digits. These conditions make firefighting more difficult. “Heat is a serious health concern for firefighters,” said Grandy over the phone. “When you have that much heat, and single digit relative humidity, it’s dangerous for everybody and can cause heat illness.

Grandy said she is expecting to receive information about the firefighter who was injured on Monday sometime this evening.

According to August Complex public information officer Jason Nedlo, strong winds played a role in the fires quick expansion. “As big as this fire is, that was pretty rapid growth,” said Nedlo over the phone early this afternoon.

Winds are forecasted to die down this afternoon, which may give the firefighters a chance to more aggressively work to contain the complex. According to Nedlo, the August Complex incident meteorologist said that until Saturday, both light winds and cooler temperatures are expected.

“Those are good conditions for fighting fire,” said Nedlo. “We can fight the fire very aggressively for the next few days.”

On Saturday, conditions are predicted to go downhill, with warmer temperatures and heavy winds returning. “We’ll just have to see what Saturday brings,” said Nedlo, explaining they might have to take a less aggressive approach on Saturday if the forecast is correct.

The Hopkins fire, which was added to the complex a few days ago is now 8,096 acres. It is burning northwest of the Doe fire, the largest fire in the complex. The fire started in the Yolla-Bolly Middle Eel Wilderness, but has now spread into Shasta-Trinity National Forest.

Since wilderness areas are unmanaged and fire is a natural part of California’s ecosystem, the US Forest Service and Bureau of Land Management allowed the fire to take its course. However, now that it has spread into Shasta-Trinity National Forest, it is being actively fought. Shasta-Trinity National Forest’s resources are working to contain the fire on the north side, and August Complex operations sent a division supervisor and division supervisor trainee to the Hopkins fire to evaluate what is happening and figure out what support they can provide.

“We are expecting more resources to show up on the August Complex and we want to divert some of those resources to Hopkins to assist,” said Nedlo.

August Complex operations have requested more resources, but they do not know if and when they may arrive. Nedlo explained that the National Interagency Fire Center, which is located in Boise, Idaho, and provides logistical support for all wildland fire agencies, is in charge of looking at available resources on a national level and deciding what can be sent, where, and when. They will decide if they can send the August Complex the resources they requested.

There is no further update on the firefighter who was injured Monday, August 31, at this time.

MENDOCINO CO., 9/1/2020 — A firefighter died yesterday, Monday, August 31, while fighting the August Complex Fire in Mendocino National Forest, August Complex public information officer Jason Nedlo confirmed over the phone this morning. Another firefighter was injured, resulting in their hospitalization. Nedlo was not able to provide The Mendocino Voice further information.

A Dallas based Fox affiliate, KDFW, reports that Diana Jones, 63 of Cresson Texas, was the firefighter who lost her life yesterday. Jones was a volunteer firefighter and EMT from with the Cresson Volunteer Fire Department, outside of Fort Worth. However, according to the CBS affiliate in Dallas, she had traveled to California to work with a private contractor, and it is unclear if that company was under contract with the Forest Service, or otherwise engaged. According to the same CBS station she died in Mendocino County, though that has not been confirmed with Forest Service officials, while moving her vehicle. The August Complex fires are burning where Mendocino, Glenn, Colusa and Tehama counties meet deep in te Mendocino National Forest.

The August Complex has now burned 242,941 acres and is 20 percent contained. The largest fire in the complex, the Doe Fire, absorbed the Glade Fire, one of the smaller fires. The Doe totals 205,714 acres. The entire eastern border and much of the southern border of the Doe fire is contained.

Three new fires have popped up in the complex: the Hopkins (7,472 acres), Willow Basin (915 acres), and Vinegar Peak (12 acres) fires are burning in the Yolla Bolly-Middle Eel Wilderness and the Shasta Trinity National Forest.

These new fires are about 25 miles northeast of Covelo.

The August complex firefighters working with Shasta-Trinity firefighters to contain the Hopkins on its north side. According to Jason Nedlo, public information officer, the August Complex operations team is working to figure out how many resources, which are already stretched thin due to fires around the state, they can allot to the Hopkins fire.

“Shasta-Trinity has their own resources. Our operations folks are trying to figure out, based on the 242,000 acre fire we’re dealing with, what we can provide them. There are ongoing discussions about whether or not we can help,” said Nedlo. “We’re trying to give them what we got but we’re not overly staffed here either.”

Very dry, hot, and windy weather is forecasted to arrive in California starting this afternoon, adding to the challenges of firefighting. Although the heat and low humidity are expected to stick around, the wind should quickly die down.