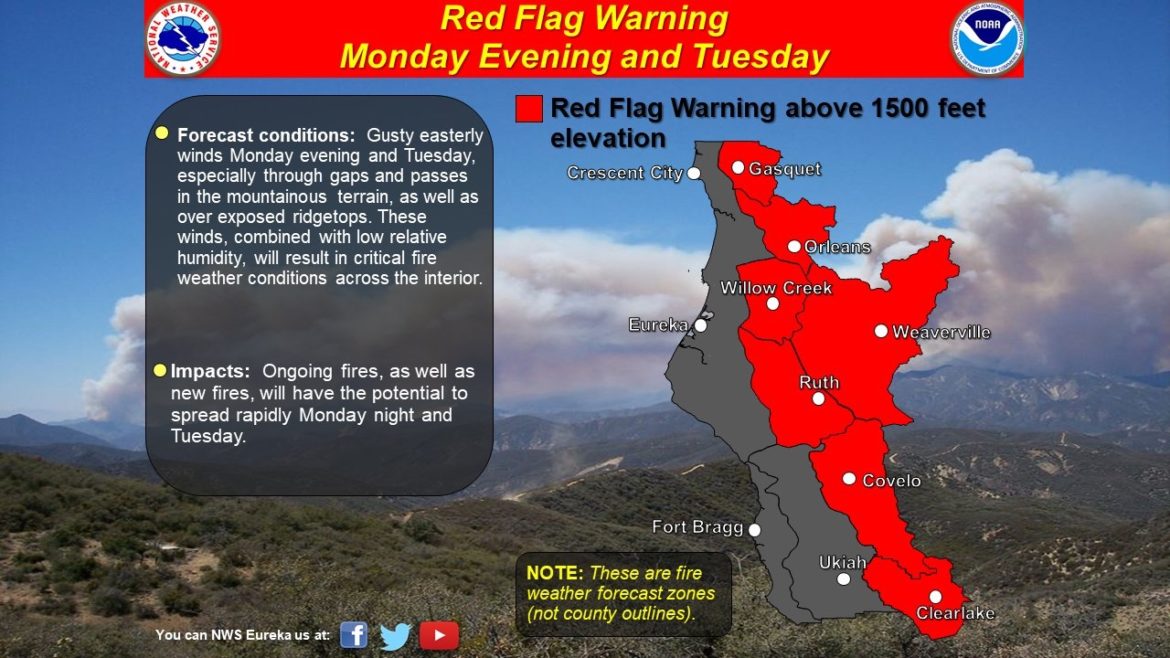 UKIAH, 9/6/20 — A red flag warning has been issued for the eastern areas of Mendocino County and a large portion of Lake County at elevations above 1500̔, along with Sonoma County, and much of the rest of the state, with powerful northeasterly winds expected to begin blowing through the area Monday evening. Under this extreme fire weather new fires can start easily and grow quickly — and existing fires, such as the massive August Complex (already the fourth largest fire in California history) could grow rapidly. Also, given the enormous fires already burning, and the likelihood of even more extreme fire weather in Oregon, firefighting resources are stretched extremely thin across the West.

Today was already a record breaking day, an in many parts of the state all time record high were set, meaning today may well have been the hottest day in California since reliable records have been kept. This hot weather has exacerbated already extremely dry and dangerous fire conditions, and with dry offshore winds expected tomorrow night, the stage is set for a potentially very difficult week.

Meteorologists predict that winds might blow at sustained 25 mph to 30 mph in the valleys with higher gusts, and gusts up to 50 mph on hilltops and ridge lines. Under these conditions, as we all well know by now, fires can grow with staggering speed and cause tremendous damage. Cal Fire is asking all Californians to exercise extra caution this holiday weekend in light of the danger.

The map in the tweet below shows the fire risk in the broader area:

In the southern Sierra Foothills region a red flag warning has also been called. Unfortunately, the Creek Fire is currently burning in this area, a fire of historic strength which may well be worsened by the new strong winds.

Often winds bring with them clear air, but in this case they may push a substantial amount of smoke from the August Complex and even the Creek Fire back down into Mendocino County.