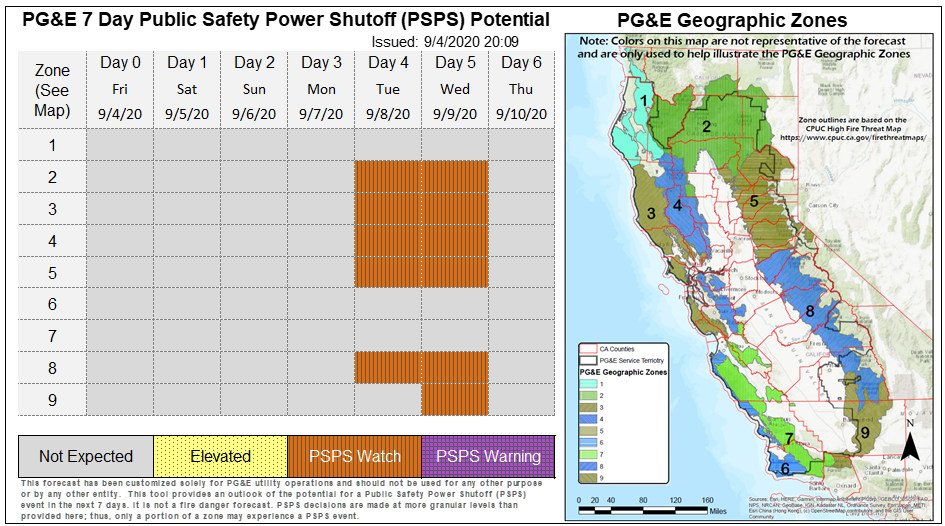 PG&E's forecast of weather risks which may necessitate a planned power shut-off as of 9/4/20.

WILLITS, 9/4/20 — This will be a complicated weekend for California’s power grid, and a stressful one for any Californians who pull electricity from the grid. With a historic heatwave forecast that will be quickly followed by strong dry winds from the north and east, two separate kinds of power outages are possible beginning tomorrow.

The California Independent System Operator (Cal ISO), the non-profit organization which oversees California’s electrical grid has called a “flex alert,” essentially an announcement that power shortages by result in rolling blackouts, and that people are being asked to lower their electrical consumption. That flex alert is in place beginning tomorrow, Saturday, until Monday between the hours of 3 p.m. and 9 p.m. During these hours Californians are asked to not run major appliances, to turn their air conditioners to a higher temperature, and generally conserve electricity.

Then as the threat of rolling blackouts due to the heat wave induced power shortages wanes dry northeasterly winds will pick up, blowing up to between 20 and 30 mph with higher gusts. These kinds of dry offshore winds create very dangerous fire conditions and as a result Pacific Gas & Electric is currently saying that there is a “PSPS watch,” for Tuesday and Wednesday of the coming week.

As readers may recall from last year, PG&E has instituted a four tier warning system for planned power outages which they call “public safety power shutoffs.” The tiers are, in ascending order of severity: not expected, elevated, PSPS watch, and PSPS warning.

Right now most of Mendocino, Lake and Sonoma counties are in areas that are under a PSPS watch. This means that if conditions warrant PG&E may preemptively shutoff power through large sections of these counties to avoid the risk of their power lines sparking yet another fire.

Here is the press release from Cal ISO concerning the flex alert:

FOLSOM, Calif. – The California Independent System Operator (ISO) has issued a statewide Flex Alert, a call for voluntary electricity conservation, beginning Saturday and extending through Monday, from 3 p.m. to 9 p.m.

Labor Day weekend temperatures are forecast 10-20 degrees above normal for California, and the power grid operator is predicting an increase in electricity demand, primarily from air conditioning use. Overnight temperatures statewide are projected to be at least 10 degrees higher than normal, which doesn’t allow infrastructure to cool down.

High heat is also predicted throughout the West for the weekend, which can limit the ISO’s ability to import energy to serve demand.

Consumers can actively help by shifting energy use to morning and nighttime hours. Conservation can lower demand and avoid further actions, including outages, and lessen the duration of possible power interruptions. For example, consumer conservation efforts during a heat wave on Aug. 17 and 18 were key to preventing expected power outages.

Consumers are urged to conserve electricity when the grid is most stressed in the afternoons and evenings, when temperatures remain high and solar production is falling due to the sun setting.

The ISO recognizes that reducing energy use during the hot time of the day is a hardship, especially for those working from home or for families with children schooling at home. However, if a large enough number of consumers conserve even in small ways, they can help grid operators avoid more serious system emergencies. Between 3 p.m. and 9 p.m., the ISO is urging consumers to:

• Defer use of major appliances.

• Use fans when possible.

Consumers can also take steps to prepare for the Flex Alert by doing the following before 3 p.m.:

• Set pool pumps to run in the early morning or late at night.

For information on Flex Alerts, to get more electricity conservation tips, and to sign up for conservation alerts, visit the ISO’s Flex Alert website. Visit the ISO’s News page for more information on the heat wave’s impacts on grid operations, and to learn more about alerts, warnings and emergency notices. For updates on grid operations, follow us on Twitter at @California_ISO or @FlexAlert, or monitor system conditions in real time at ISO’s Today’s Outlook.