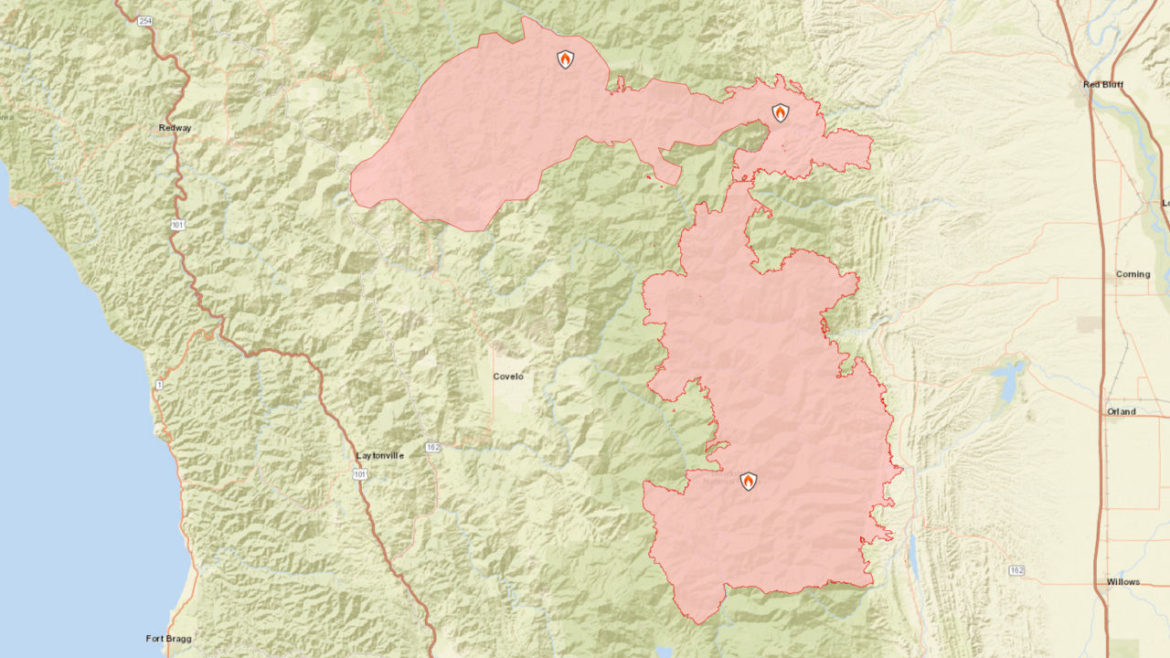 The Hopkins Fire and the August Complex as of September 9, 2020.

UPDATE 9/10/2020, 9:00 a.m. — The Mendocino Sheriff’s Office ordered new evacuations in Mendocino County for what the sheriff’s office has designated as Zone J: East of Elk Creek, east of Eden Valley, and north of Sanhedrin, which is sometimes referred to as Big Signal Peak. Evacuation warnings are now in place for Zone W and X: Eden Valley area.

You can also see the map by following this link.

UPDATE 7:15 p.m. — New evacuations have been ordered in Humboldt County all the way north to SR-36, east to the county line with Trinity County, and including Blocksburg, Fort Seward and Alderpoint. See the map below for more details. Garberville remains under an evacuation warning.

The mass of combined wildfires burning in the National Forest continue to grow, with the fires now extending over such a wide area, that they are burning in at least two separate National Forests, Shasta-Trinity and Mendocino — the fire may have also extended into Six Rivers National Forest. The area is so vast and covers so many jurisdictions that the names of the fires and complexes have been changed — however, what is visible from maps and satellite maps is that these various fires have burned together into one massive burn scar and set of blazes extending from Glenn County in the southeast, Lake County in the south, up through Mendocino and Tehama counties, then west through Trinity and into Humboldt counties.

In Mendocino County the evacuation areas remain the same and can be viewed in the map below. This afternoon Sheriff Matt Kendall explained that an actual evacuation of Covelo remains unlikely, and that firefighters are working very hard along the ridges east of Covelo to establish lines. He added that the probability of the fire, reaching Hearst or the Van Arsdale area remains low.

In their afternoon update the Forest Service explained that the August Complex has jumped the Black butte River and the M1 Forest Road. Further south the fire established itself in the Yuki Wilderness, and may have made its way into the Middle Fork Eel River canyon. In these areas firefighters have had to fight house to house, to protect cabins and other property from the fires.

But the situation is in some ways as murky as the smoke. August Complex public information officer Jason Nedlo said the August complex grew significantly today and yesterday. However, they don’t know exactly how much or where.

Due to heavy smoke, and steady winds preventing aircraft from flying the fire area, there is little certain information on the former August Complex fires, including the Doe (still part of the August Complex) and the Elkhorn, Hopkins, Vinegar, and Willow fires (no longer being managed by the August Complex.)

Hopkins and Elkhorn fire public information officer Amelia Fleiz said the latest acreage numbers she has are the ones from this morning, with the Elkhorn at 69,735 acres and Hopkins at 49,887 acres. Fleiz said there are currently 100 resources managing the fires. She could not say what those resources were.

Nedlo said they are hoping that an infrared flight will be able to fly over the fires tonight and provide details as to where the fire has gotten to, which can help them make their action plans.

They are also hoping to get new information at tonights in-briefing, in which the current August Complex team will welcome a Great Basin Interagency team. The current team has been managing the complex for 21 days, meaning it’s time for them to switch out. Firefighters must time out every 14 days and managing teams must time out every 21. The Great Basin team will shadow the current team tomorrow and Friday, before officially taking over at 6 a.m. Saturday morning.

The new team assigned to the complex is a type 1 team. Type 1 teams are usually assigned to large, complex fires, such as this one, but are trained to respond to any event. For example, type 1 inter-agency teams assisted FEMA in responding to Hurricane Katrina.

UPDATE 3:00 p.m. — The evacuation warning area in Humboldt County has been extended to the 101, and included Garberville as the Hopkins fire (formerly part of the August Complex, but now classified as part of the Rock Complex) pushes west. Though weather conditions are improving, these fires have become so massive that they may continue to burn for some time.

UPDATE 2:20 p.m. — Judging by satellite data, it appears that the Doe, Hopkins, and Elkhorn fires have burned into each other. However, they all retain their separate names at this point and are now being managed as two separate complexes, the Rock Complex, which includes the Hopkins and Elkhorn fires, and the August Complex, which includes the Doe fire.

According to the federal government’s incident website, the August Complex is currently at 372,012 acres, the Elkhorn fire is at 69,735, and the Hopkins fire is at 69,735 acres. Together, that is 491,466 acres, more acres than were burned in the 2018 Mendocino Complex, which currently ranks as California’s largest recorded wildfire. However, we won’t know the exact scope of things — exactly how many acres have burned and where — until the smoke clears.

UPDATE, 1:20 p.m. — The Hopkins fires continuous push west is threatening parts of Humboldt County. There are now mandatory evacuation orders for areas south of highway 36 in Bridgeville and all communities along Alderpoint road down to the Mendocino County/Trinity line. The Humboldt County Sheriff’s office advises evacuees to take Alderpoint road.

You can go to the Humboldt County sheriff’s website for evacuation routes and maps of the areas being evacuated.

There is a temporary evacuation center at Southern Trinity High School, at 500 Van Duzen Road. There are people there to direct evacuees.

Humboldt County fairgrounds is open for evacuated animals. Call 707-496-8841 to arrange a drop off.

MENDOCINO Co., 9/9/2020, 11:00 a.m. — The Mendocino County Sheriff’s Office has issued new mandatory evacuation orders for the Island Mountain and Mina areas north of Bell Springs and north of Covelo. The August Complex has surged to the west, arcing over the top of the Covelo and burning into the area where Mendocino, Humboldt and Trinity counties meet and forcing evacuations in Kettenpam, Zenia, Hettenshaw Valley, and all areas south of Ruth.

The National Forest area from Anthony Peak down to Hull Mountain, west of the county line, and east of the Eel River near the Eel River Ranger Station are also under a mandatory evacuation order.

Covelo High School, located at 76280 High School Street, is open for evacuees and Covelo rodeo grounds, at 77286 Covelo Road is open for small and large animals, including livestock. If you need help with animals in the Covelo area, call 707-272-2299 and ask for Sarah.

According to National Weather Service Eureka meteorologist Jeff Tonkin, weather conditions will improve throughout the day.

Yesterdays strong northeasterly winds (blowing from the northeast to southwest), gave way to lighter, more variable winds this morning, which are blowing in all different directions, Tonkin noted. Currently, winds are blowing between five and 10 miles per hour with gusts staying at 15 miles per hour and below. Later this afternoon, regular early fall wind conditions will resume, with light east to west winds at night and west to east winds during the day.

The smoke is so thick, heavy, and dark, that sun rays cannot penetrate through it, which is keeping temperatures relatively cool, in the mid upper 70s.

Relative humidity has returned to near normal, around 10 to 15 percent at higher elevations and 20 to 30 percent in the valleys.

Despite improved weather conditions, the fires show no sign of slowing down. Tonkin explained that since the fires have so much momentum right now, slight changes in wind, humidity, and temperature may not make a big difference in slowing the powerful infernos.

This morning the August Complex was split into two complexes. The Doe Fire will continue to be managed by the U.S. Forest Service, and the Hopkins, Elkhorn, Vinegar, and Willow fires will be managed by California Interagency Incident Management Team 5. California Interagency Incident Management (CIIMT) teams are comprised of state, local, and federal agency members. CIIMT is reserved for the largest and most complex wildfire incidents.

“There is so much going on here, we’re trying to divide and conquer,” said August Complex public information officer Terry Krasko. “It makes sense to rearrange things.”

Based on the latest information from the federal government, the August Complex is 421,899 acres and 24 percent contained, the Elkhorn fire is 50,126 acres and 55 percent contained, and the Hopkins fire is 49,887 acres, containment is not recorded. This situation is developing very quickly, and it is unclear whether or not any of these numbers are overlapping. These acreage numbers may change as new information becomes available. However, this conglomeration of fires is now at least the second largest fire in modern California history.

The vast amount of smoke darkening the fires in Mendocino County is from the August Complex, Hopkins, and Elkhorn fires, not the Oak fire. Krasko said that as he left base camp, which is east of the complex in Stonyford California, at 8 a.m. this morning, it was still dark as night.

Areas west of the fire seem to be enveloped in similar conditions. Photos from Willits, Covelo, and further west, show dark red skies in the middle of the day. Last night, a dark amber glow took over the coastal skies as it rained ash along the ocean.

There are currently 25 hand crews, 72 engines, 20 dozers, 41 water tenders, and eight helicopters managing the August Complex, it is also unclear whether or not that includes the Hopkins and Elkhorn fires, or if those resources are just managing the Doe fire in Mendocino National Forest.

Krasko said firefighters are on the ground scouting the fire, trying to figure out where it moved and determining the most effective places to start creating lines. They are hoping to get new information from last night’s infrared flight soon, so they can better understand where the fire is and create new maps. “Everything is ongoing,” said Krasko. “We make an incident action plan daily, with shifting objective priorities depending on how the fire is burning. We have to have a very solid plan before we begin making moves, it takes time and understanding.” Krasko said the one thing that holds true with every new incident plan is that the number one priority is to protect the firefighters, and protect the public.

The historic fire conditions, potentially the worst fire event in the modern history of the Western U.S., have prompted the closure of National Forests. As of 5 p.m., all National Forests in California will be closed: