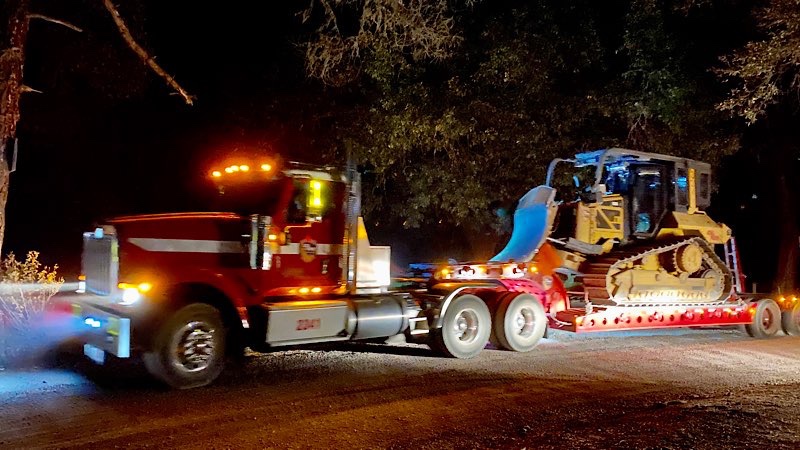 A Cal Fire bulldozer transport big-rig makes its way to the Hearst Bridge on its way towards the August Complex on Monday night. 9/14/20

WILLITS, 9/15/20 — The August Complex, which was already the largest fire in California history, has now reached 794,801 acres.

With the new growth comes new evacuation warnings, as of this afternoon a new warning was issued for the area immediately east and south of SR-162 between U.S. Route 101 and the entrance to the Round Valley, as a finger of the fire continues to push its way northwest in the direction of Dos Rios. People in those areas are advised to be prepared to leave, but are not yet ordered to. These areas are referred to as zones “AN” and “AQ” on the Google Map created by the County. You can see the whole map here, or below.

(In embedded Google Maps, there is a button in the upper right corner that will take you to a seperate page where the whole map can be viewed)

“Where it’s creeping into the Sanhedrin area, it’s nearly impossible to get to,” said Sweeney. Steep, brushy terrain is making it challenging for south zone firefighters to contain the fire near Sanhedrin mountain. “We’re hoping that the Sanhedrin itself will potentially serve as a break,” Sweeney said over the phone.

While firefighters can’t get into the Sanhedrin, they are working hard to protect the nearby Lake Pillsbury community. Sweeney noted that the south zone is putting a lot of resources into that area, where firefighters are doing structure protection, point protection, laying hoses, and setting up sprinkler systems.

A prevailing southwesterly wind is aiding the firefighters. Breezes continue to push to the northeast, moving the flames away from Lake Pillsbury. Additionally, relative humidity is forecasted to get up to between 20 to 35 percent tonight. “That’s really good compared to what we’ve had,” said Sweeney.

Sweeney explained that usually a southwesterly wind blowing against a fire would significantly slow the burning. However, in this case, the fire is still going steadily due to dry, densely packed brush in the area that is fueling the flames.

In addition to Lake Pillsbury, the south zone is focusing their attention on the Salt Creek area in Tehama County, which is the only area on the eastern border where they don’t have containment lines. The U.S. Forest Service, which is managing the south zone, is back burning and using the military to aid in building containment lines in that area.

In the August Complex West Zone, which is largely burning in Mendocino County, Cal Fire is focusing their efforts and resources on the western front of the fire, parts of which are burning only miles from Covelo and Willits.

The west zone team is pulling out all the stops to contain the western front. They have boots on the ground, dozers building containment lines, and air crafts dropping retardant. “We have eyes on the whole wester perimeter,” said west zone public information officer Will Powers.

Powers said they estimate they will have full containment of the fire by September 30, 2020. He noted that this is a rough estimate, as weather conditions are subject to change.

Powers noted that the fire burned actively through last night and is now creeping westward. Most notably, it has spread in the Deep Hole Valley area, southeast of Covelo in the Yuki Wilderness, and up to Twin Rock Ridge. He said Cal Fire hopes to have some solid containment lines on the west side of the fire in the next few days.

Powers said especially with warm and dry conditions forecasted to hold, that personnel safety will continue to be the first priority of Cal Fire.

The August Complex North Zone team is focusing their efforts today on the Ruth Valley area, where they’re providing structure protection and working along Rattlesnake Ridge to halt the fire’s progress towards state route 36.

August Complex North Zone public information officer Hannah Thompson-Welch said late this morning that the fire was just a little over two and a half miles from highway 36.

Firefighters are constructing indirect line, line that is set a bit away from the fire, near highway 36, and working hard to harden nearby communities such as Hayward and Forest Glen.

While prevailing southwesterly winds are aiding firefighters down in the complexes south zone, they are hindering the north zone team. Winds pushing from the southwest to the northeast are predicted to pick up in the afternoon. Thompson-Welch said over the phone that at 5,000 feet, winds are forecasted to jump from six to nine miles per hour to roughly 17 miles per hour. This could increase fire activity to the north and east, where the fire is already spreading, near SR-36.

“We are constantly evaluating as the fire moves across the landscape,” said Thompson-Welch. “We will be evaluating all afternoon. If it is warranted, local sheriffs and offices of emergency services could push through new evacuation orders.”