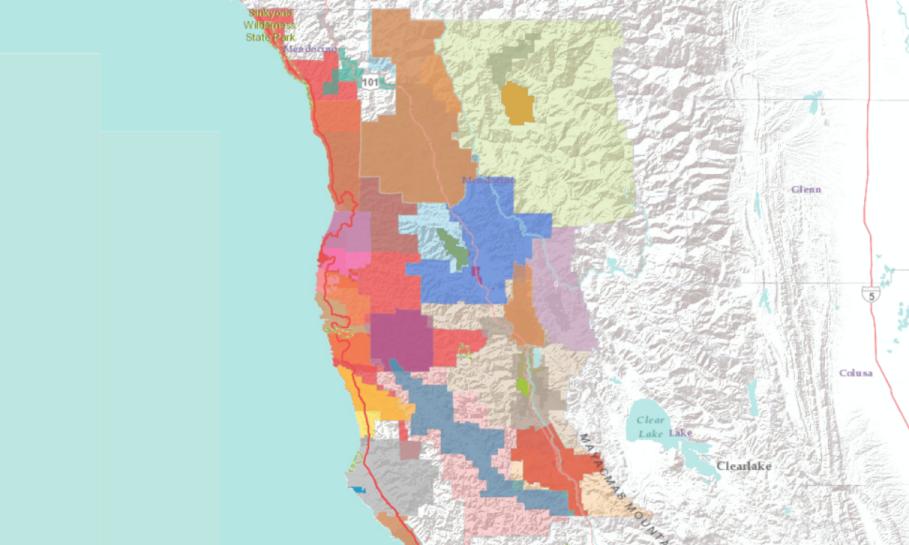 A sample of the district map.

Editor’s Note: This article was near midnight on Aug. 6, Thursday night. The filing deadline for these seats is today, Friday Aug. 7.

MENDOCINO Co., 8/6/20 — Tomorrow is the deadline for candidate filing for the November 3 statewide general elections, and with scarcely a day left to file, the latest information from the county clerk-recorder’s office suggests that a great many of the councils, school district and special districts boards will wind up having uncontested elections. Though it is likely that some number of people will fill out their paperwork at the last minute, historically it’s been the case that many special district elections in Mendocino County go uncontested. And when an election is non-competitive, the Board of Supervisors steps in to make an appointment.

Competitive elections in these districts provide oversight and accountability for the great number of special districts that do a lot of the heavy lifting of providing services in rural parts of the state, including here. If you would like to run, tomorrow may be your chance to file for candidacy. However, under certain circumstances when the incumbent of a given seat chooses not to file, the deadline will be extended for five days until August 12.

On Thursday afternoon elections office staff were still taking filings and compiling the candidate list for the 129 seats up for grabs on special district boards (not counting municipal elections) that are up for grabs this November.

But as of this afternoon far fewer than the required number of people needed to make all these elections competitive have filed to run, according to a running candidates’ list from the county clerk’s office. The following districts do not have enough people who have filed to have a contested election — and in some cases, there aren’t yet enough people to even fill out the boards. This list is based on data from before the filing period ended, and could change as people rush to file, but as of Thursday afternoon here is the list:

Some may wonder what a special district even is. Special districts are local government agencies that provide a specific service or multiple services within a circumscribed boundary. They are funded by taxpayers and service fees, and are democratically controlled. They provide vital services in rural and unincorporated communities, and cumulatively employ about 90,000 employees statewide, collecting 21 billion in revenue, according to a report by the Little Hoover Commission, a state oversight agency. However, their governance boards, though nominally democratic, often have many appointed officials because of uncontested elections.

(For more about special districts in Mendocino County, here is a three part podcast series on them from 2018.)

A non-contested election means that there are not enough candidates for the election to be competitive and for there to be a winner and loser(s). In Mendocino County, elections for special districts board seats frequently do not have enough candidates to be competitive. And, in those cases, the county clerk’s office will most often send the candidates list to the County Board of Supervisors, who will approve and appoint board members for the districts.

…Mendocino County Board of Supervisors will appoint those (UDEL) races that do not have more candidates than seats up for election, unless the District makes a formal request to be on the ballot. Candidates must have completed their paperwork and be listed on this spreadsheet as a candidate. Those individuals interested in serving on a District Board who have not completed their paperwork, must write a letter to the Board of Supervisors at 501 Low Gap Road, Room 1090 Ukiah, CA 95482 informing the BOS they are interested in serving on a District Board. The Board of Supervisors may appoint individuals “in-lieu” of election through Election Day.

“The Board doesn’t just appoint anyone,” explained Katrina Bartolomie, the assessor county clerk. “[Candidates] send a letter of interest to the Board after filing has been completed.” The Board has until the election on November 3 to appoint people, otherwise, the position remains vacant. In other words, the Board of Supervisors does not just pick anyone they want, they mostly follow the letters of interest that candidates submit and that the county clerk’s office forwards to them. “Hopefully there are always people who are willing to fill these positions,” said Supervisor John Haschak in a brief interview, “If not, the supervisor goes out to try to recruit people.”

This Wednesday and Thursday, the county clerk’s office was swamped in paperwork for the November elections. “We just have two people in the office,” explained Bartolomie. “People decided to wait until the last minute to file their paperwork.”

As the filing period is not yet over and the candidates list is not yet finalized, Bartolomie could not say how many elections this year would be competitive or not. However, she did note that district board members should ideally be democratically elected.

“It’s important that districts go through the election process to fulfil people’s constitutional rights,” she said.

As candidate filing will likely continue in some seats until August 12, it is too early to know how many districts board seats will end up having contested elections. However, if the last few election cycles are any indication, it is likely that many special district board members will end up being appointed by the Board of Supervisors.

Many special districts in Mendocino County have not seldom seen contested elections in the last decade, according to the municipal service reviews from the Mendocino Local Agency Formation Commission (LAFCo), which is an agency that oversees and reports on special districts as well as other local governance.

For example, this 2016 municipal service review on fire protection districts in Mendocino County includes reviews of 13 special districts that provide fire protection. Of the 13, 10 are fire protection districts (Hopland, Covelo, Leggett Valley, Little Lake, Long Valley, Redwood Valley-Calpella, Mendocino, Albion-Little River, South Coast, and Piercy) and three community service districts (Potter Valley, Comptche, and Elk). In 2016, the board members in all of the 13 districts were appointed after uncontested elections, except for three of the board members in the Elk community services district.

Even though Elk was one of the few districts with competitive elections, an updated 2018 review of fire protection districts from LAFCo noted that “it is typically difficult to fill board positions” in the Elk community services district and that, “The District should continue efforts to identify more than one candidate for each Board position so that voters within the District will be afforded an opportunity to vote.” The same review gave similar feedback to the other 12 fire districts.

In this 2014 review of eight water districts in Mendocino County, it’s noted that the only elected board members were one member in Irish Beach’s board and all five members of Pacific Reefs’ board. In total, there were six elected board members, five vacant, and 29 appointed.

“We write municipal service reviews to evaluate the health of the district,” explained Uma Hinman, the executive director of Mendocino LAFCo. “For example, if one district has trouble getting all five members for its board, then we’ll call that out.”

The process for appointing a board member or trustee in a special district board is not set in stone either. “If there’s a vacancy for a specific district that’s in my supervisorial district, I might receive a letter of interest [from a candidate] or more than one letter and then interview people and make a recommendation to the Board,” explained Supervisor John Haschak in a brief interview.  The County Board will then go on to approve the appointment, which is, “pretty much a rubber stamp at that point,” explained Haschak.

However, some districts can also appoint their own directors should there not be sufficient candidates for a competitive election. For example, in 2017,  three vacant positions in the Long Valley fire protection district were uncontested in the November election and the Board of Supervisors appointed two positions while the district’s board of directors appointed one.

Special district board members serve staggered terms of either two or four years that end on the first Friday of December. Sometimes, board members resign during their term. In that case, the special district board has 60 days to appoint a new member, and after that the Board of Supervisors has another 30 days to appoint someone, according to the office of the county clerk.

In previous years, special district elections occurred on odd-numbered years, however, Bartolomie explained that recently they have been shifted to even numbered years to coincide with statewide general elections.