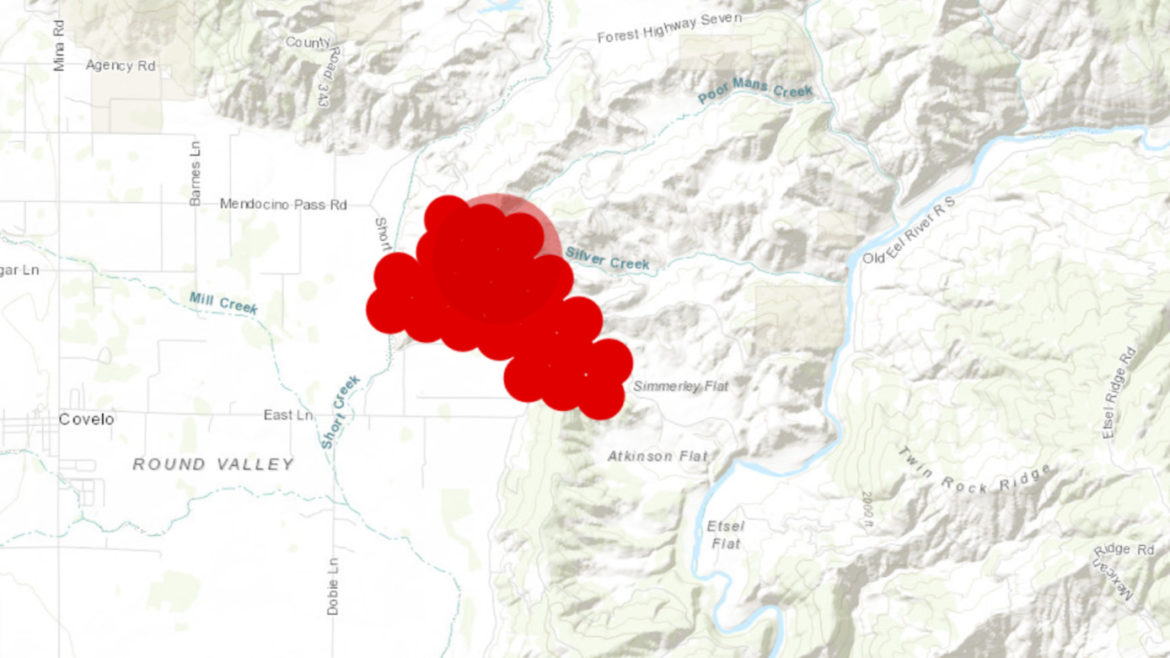 Satellite heat imagery of the Creek Fire near Covelo as of the morning of August 19, 2020. This data is already several hours old and should not be used for evacuation or public safety reasons.

Here’s the description of the current activity from Cal Fire:

Fire resources will continue mopping up and looking for hot spots within the containment lines; steep terrain hampers access and control efforts. Interior portions of the fire will continue to burn and may produce smoke for an extended period of time in the burn. Fire Suppression Repair and Rehabilitation will continue throughout the fire area.

Smoke plumes were visible from parts of north county this evening, but these are likely portions of what is being referred to as the August Lightning Complex, which is burning on the eastern side of the Mendocino National Forest in Glenn County, and is being managed by the United States Forest Service.

UPDATE 8/20/20 11:30 a.m. — Containment on the Creek Fire in Covelo, which first began on August 18, is up to 70%, and all evacuation warnings were lifted this morning by the Mendocino County Sheriff’s Department. The fire was estimated to be 800 acres yesterday, and is now described as 820 acres in this morning’s Cal Fire update, but that change may be the result of more accurate mapping.

Fire crews will remain on the scene increasing containment line and monitoring any hot spots.

According to Cal Fire’s morning report, a total of two outbuildings were destroyed in the blaze, and eight more remain threatened. However, additional details regarding those buildings was not provided in the incident summary. Early reports from scanner chatter and social media indicate that a cannabis garden and greenhouses may have been damaged during the fire.


UPDATE 8 p.m. — Containment on the Creek Fire has grown to 50%, up significantly over the course of the day, and the fire has not grown in size over the day, according to the 7 p.m. Cal Fire update. 66 personnel remain on the scene, and evacuation warnings remain in place, but the mandatory evacuation orders were lifted this afternoon.


UPDATE 4:10 p.m. — Evacuation orders in the vicinity of the fire have been reduced to warnings, and the estimated size of the fire is now 800 acres due to better mapping, and the fire is 40% contained.

UPDATE 8/19/20, 8:25 a.m. — Firefighters made some progress against the Creek Fire, near Covelo, overnight, creaking containment lines equivalent to 20% of the fire’s perimeter. According to a Cal Fire incident update the fire has grown to about 1000 acres, though it’s likely that better mapping conducted in daylight will provide a more accurate estimate.

One structure has been destroyed and no one has been injured.

The fire is burning in dry grass chaparral and oak woodland in the foothills of the Round Valley. It began in the vicinity of the intersection of SR-162 (Mendocino Pass Rd.) and Short Creek Rd. and has spread west and uphill from there, and continues to threaten ranches and forest land to its west.

Yesterday evening a large smoke column topped by a pyrocumulus cloud was visible from central Mendocino County. From Willits it appeared to be on or near Sanhedrin Peak, though its exact apparent location varied due to parallax. This smoke column was not from the Creek Fire, but rather from a far larger fire burning in the National Forest in Glenn County. That fire, the Doe Fire, is many thousands of acres in size and being handled by the Forest Service. It is far east of Covelo and Mendocino County, and its movement has been towards the east and in no way threatens Mendocino County.

Evacuation orders and warnings remain in place and can be seen in the Cal Fire incident report below:

UPDATE 10 p.m. — The Creek Fire is 209 acres with 5% containment according to Cal Fire’s evening update. There are eight structures threatened and one was destroyed this afternoon. Here’s the fact sheet from Cal Fire:

There’s also a large map of the area under mandatory evacuation here:

There are a total of 73 personnel fighting the Creek Fire in Covelo, which so far is at 0% containment. Responding agencies include Cal Fire, Covelo Fire, Leggett Fire, Laytonville Fire, and crews from the California Department of Corrections, and there are five engines, two water tenders, one helicopter, two hand crews, and three dozers on the scene, according to the most recent update from Cal Fire.

Here’s the full text of the Nixle from MCSO:

UPDATE 5 p.m. — The wildfire burning near Short Creek Rd. has very quickly grown up to 40 acres in size and an evacuation warning has been issued for the area, south and east of Mendocino Pass Rd. and east of Short Creek Rd. from about the base of the hills, as the fire is moving east and uphill from the valley floor. One structure has been destroyed.

Sheriff Matt Kendall explained in a brief phone interview that the evacuation remains a warning, saying that there are enough deputies in the area to “kind of run door to door on this one.”

ORIGINAL
WILLITS, 8/18/20 — Yet another fire is burning in Mendocino County, this one in Covelo at the intersection of Short Creek Road and SR-162, right where the 162 (aka Mendocino Pass Road), turns northeast and heads into the hills. The fire does not appear to be lightning related.

As of about 3:55 p.m. the fire was reported to be about one acres, with a slow rate of spread, and a couple spots in front — but firefighters at the scene were confident that they’d be able to control it with the resources already on the scene, and were not asking for additional resources.