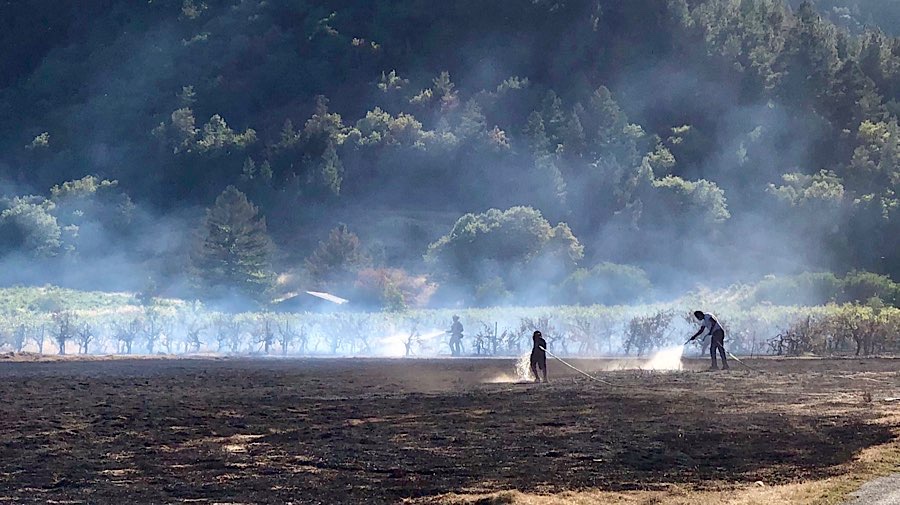 UPDATE 8/13/20 — 12:15 a.m. — The Mendocino County Sheriff’s Office (MCSO) issued a press release with information about fires, and a description of the suspected arsonist. MCSO is asking for any witnesses or anyone with surveillance footage fitting the time and place of the fires to call the tip line at 707-234-2100.

Here’s the press release with details — see below for original story:

Synopsis:
On 08-12-2020 at 4:55 PM Mendocino County Sheriff’s Deputies were dispatched to a fire on South Dora Street near the intersection of Fircrest Drive in Ukiah, California.

As Deputies were arriving at the scene, a separate fire was reported on Gobalet Lane near South Street Street approximately 1.5 miles to the south.

As Deputies were also arriving at this scene, they noticed another fire on Highway 253 near South State Street which was approximately 1/2 mile to the south.

Deputies began providing evacuation warnings to the public located in these areas when another fire was reported on Plant Road near Taylor Drive in the approximate area to the fires on Gobalet Lane and Highway 253.

As Deputies were contacting the public they learned several people had seen a person who they believed was intentionally starting the fires.

This person was reportedly a Native American or Hispanic adult male.  He was described has having a ponytail, wearing black clothing and riding a bicycle.

For approximately two hours, several people matching the person’s description were contacted by law enforcement personnel but the contacts did not yield the person suspected of committing the acts of arson.

During the two hour period, there were three additional fires with two being located at the end of Airport Park Boulevard and one being located on Babcock Lane near the Talmage bridge.

Personnel from CALFIRE, the Ukiah Valley Fire Authority and Hopland Fire Department responded quickly to each fire scene.  Once arriving they were able to quickly contain the spread of the fires and were successful in get them extinguished.

Sheriff’s Detectives are continuing investigations into the fires which are believed to be acts of arson at this time.

Investigators are asking for the public’s assistance in identifying the person who is believed to have committed these acts of arson.

If anyone living in the following areas has security camera footage of the outside of their home depicting the person described in this press release, during the time frame of 4:50 PM to 6:57 PM on 08-12-2020, then please contact the Sheriff’s Office Tipline by calling 707-234-2100.

The areas of interest for security camera footage are:

UPDATE 7:20 p.m. — The person detained earlier was either determined to not be the suspect, or was detained for another reason, it’s not clear. What is clear is that the sheriff’s office is saying that the suspect in these arsons remains at large.

A sixth, and very small, fire was quickly put out on the railroad tracks near Costco. The fire was burning debris and was only a few feet by a few feet in size.

UPDATE 6:40 p.m. — The fire along the Russian River is now contained. In addition the MCSO has tweeted out that they have detained a “person of interest” in the BOLO they issued earlier. However, on the scanner law enforcement can be heard searching for someone. It is unclear if this means that there were two suspects, or if there has been some miscommunication.

UPDATE 6:28 p.m. — The fifth branch of the Grace Incident (really five separate fires likely started by an arsonist) is burning along the banks of the Russian River. The fire has reached about half an acre in size and has a slow rate of spread.

According to scanner chatter, there was a witness to the setting of this last fire who saw a the fire be set and then saw the suspect run. At one point it appears that at least one person was detained but it’s unclear if that was indeed the suspect or the correct man. Another report over the scanner indicates that the suspect took off into the forest after setting the fire — however, law enforcement are having trouble pursuing due to that region now being on fire.

UPDATE 6:20 p.m. — Yet another fire, the fifth in the last couple hours, has started, this one at Talmage Road and Babcock Lane, near the Arco gas station. Firefighters are responding and the outlook is good for a quick containment.

Police and deputies are looking for a man suspected to have set these fires, and last seen running through a vineyard near this most recent fire — though other descriptions have referred to a man on a bike.

UPDATE 6:00 p.m. — Cal Fire has of officially named the fires one incident, the Grace Fire, with four “branches”: behind Grace Hudson, along U.S. Route 101, Plant Rd. and near the airport.

UPDATE 5:52 p.m. — Though all four fires have have been controlled, expect smoke for some time as firefighters continue to mop up and take care of hot spots.

It is suspected that arson was the cause of these fires and a the MCSO is seeking a suspect:

UPDATE 5:48 p.m. — Firefighters are now reporting that forward progress has been stopped in all four fires burning in the Ukiah Area; in firefighter jargon that means that firefighters have manged to contain and quench enough of the fires that they are no longer growing.

UPDATE 5:45 p.m. — The Mendocino County Sheriff’s Office has confirmed that at least four fires were burning, their locations were South Dora at Fircrest, another at the end of Plant Rd. , then one between Gobelet and SR-253, yet another at Norgard Lane. In addition there was an unconfirmed report of a fire at Walmart.

Due to the proximity of these fires people calling them in could have confused them for each other.

UPDATE 5:30 p.m. — The situation is very complicated as it appears that at least three and possibly four small spot fires broke out within minutes of each other. Scanner chatter indicates that deputies and police are seeking a possible arson suspect. There is some confusion as to the names of the fire, given that they all started so close in time and nearby.

In initial reports sheriffs deputies and local fire were referring to the fire near Oak Knoll Rd. as the Dora Fire, another fire behind Grace Hudson Elementary was called the Grace Incident.

It appears that at least two of the fires never reached even an acre in size and quickly had their forward progress stopped, and were mostly contained.

All of these fires are within Ukiah Valley Fire’s coverage area, though Cal Fire has been assisting with air support.

Here is the Nixle message from the MCSO:

EVAC WARNING FROM THE AREA OF SOUTH OF JEFFERSON LANE, WEST OF S DORA ST AND OAK KNOLL RD.

ORIGINAL 5:20 p.m.
UKIAH, 8/12/20 — A brush fire is burning on the outskirts of Ukiah in the western hills near Oak Knoll Rd. and Spanish Canyon Rd. and evacuation warnings have already been issued for that area.

The situation is murky and it’s possible that a couple additional fires are burning in the area, one behind Grace Hudson Elementary School and the other near the Walmart by the old Ukiah Brewing Company.

Scanner chatter indicates that law enforcement may be seeking an arson suspect.

We will be updating