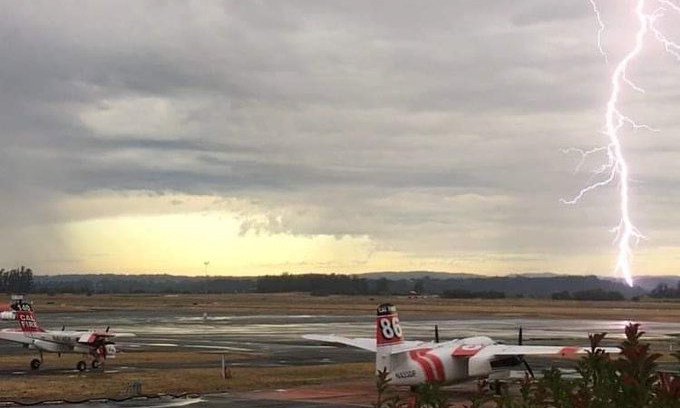 WILLITS, 8/16/20 — Thunder storms swept across Northern California last night bringing gusty winds, scatter rain, and lightning strikes which have started multiple fires across the region. In Mendocino County at least two fires are currently burning: a half-acre fire east of Hopland and a fire east, or southeast of Covelo, which was at approximately five acres, with firefighters still making access.

Cal Fire’s Mendocino Unit (MEU) has instituted their lightning coordination area (LCA) plan in Mendocino County and as a result, and those fires are currently being referred to by number and branch, per the lightning plan.

The unusual weather, a historic heat wave, follow by an extreme rare lightning storm, is the result of tropical moisture making its way up from a hurricane near Baja California, and combining with the existing high temperature air in the Southwest. Along with the extreme weather we have seen major wildfires break out in SoCal and eastern California.

In the National Weather Service’s (NWS) Bay Area division yesterday’s red flag warning (which indicates heightened danger for fires to start and spread rapidly) has been extended into tomorrow. In contrast in the NWS’s North Coast area, which includes Mendocino and Lake counties, meteorologists have not extended the warning, citing a predicted lull in fire weather conditions this afternoon.

In a brief phone interview NWS Senior Forecaster Alex Dodd explained that the thunder storms will likely be moving north and east away from our region, but that tonight will bring renewed dangers. Instead of one continuous red flag warning, Dodd said that it’s a “good bet,” that they will “very likely be issuing another red flag warning,” for tonight.

Fires have also been started by lightning in Sonoma County, and significant fires burned last night in Alameda, Monterey and Contra Costa counties, among other places.

Meteorologist and climate scientist Daniel Swain is reporting that the even may have been the largest lightning event in living memory in the Bay Area as well as being one of the warmest nights in many years.