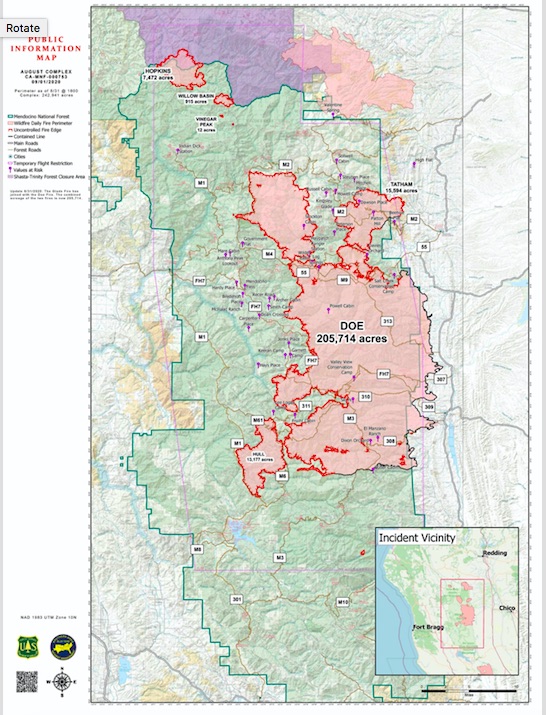 UPDATE, 9/1/2020 — A firefighter died yesterday, Monday, August 31, 2020, fighting the August Complex Fire in Mendocino National Forest, August Complex representative Jason Nedlo confirmed over the phone this morning. Another firefighter was injured, resulting in their hospitalization. Nedlo was not able to provide The Mendocino Voice further information at this time.

The August Complex is now 242,941 acres and 20 percent contained. The largest fire in the complex, the Doe Fire, absorbed the Glade Fire, one of the smaller fires. The Doe totals 205,714 acres. The entire eastern border and much of the southern border of the Doe fire is contained.

Three new fires have popped up in the complex: the Hopkins (7,472 acres), Willow Basin (915 acres), and Vinegar Peak (12 acres) fires are burning in the Yolla Bolly-Middle Eel Wilderness and the Shasta Trinity National Forest.

These new fires are about 25 miles northeast of Covelo.

The August complex firefighters working with Shasta-Trinity firefighters to contain the Hopkins on its north side. According to Jason Nedlo, the August Complex operations team is working to figure out how many resources, which are already stretched thin due to fires around the state, they can allot to the Hopkins fire.

“Shasta-Trinity has their own resources. Our operations folks are trying to figure out, based on the 242,000 acre fire we’re dealing with, what we can provide them. There are ongoing discussions about whether or not we can help,” said Nedlo. “We’re trying to give them what we got but we’re not overly staffed here either.”

Very dry, hot, and windy weather is forecasted to arrive in California starting this afternoon, adding to the challenges of firefighting. Although the heat and low humidity are expected to stick around, the wind should quickly die down.

UPDATE, 8/28/2020 — Firefighters expect that three of the four major fires burning in or near the Mendocino National Forest that make up the August Complex will merge over the next few days.

As of late this morning, the August Complex was 212,010 acres (about 330 square miles) and 18% contained. That’s about as large as seven San Franciscos. Originally, the complex was made up of 37 separate fires that were sparked by lightning on or around August 17. Many of those fires combined into the few, large fires that have been burning over the past week and change.

Now, according to the U.S. Forest Service’s update from earlier today, firefighters expect three of the major fires that make up the complex to combine into one. They anticipate that the Doe Fire, (172,327 acres and 37% contained), the Glade Fire (20,001 acres and 0% contained) and the Hull Fire (6,020 acres and 5% contained) will come together and become one larger over the next few days. At the moment, they do not expect that the other notable fire in the complex, the Tatham Fire, to join the other three infernos.

ORIGINAL
MENDOCINO CO., 8/26/2020 — The August Complex, a collection of fires burning in and around the Mendocino National Forest is currently 200,465 acres, or around 300 square miles, and 17% contained. The complex, which was originally 37 separate fires ignited during the mid-august lightning storm, is continuing to burn west, but slowly.

August Complex Public Information Officer (PIO) Lisa Walker said in a brief phone interview, based on current conditions, she does not expect the fire to make a run, or begin to rapidly advance outside of the fire line, and does not think the fire will reach the towns of Covelo, Willits, or Laytonville.

The US Forest Service, which is managing most of the complex, has completed containment lines along the east side of the complex with dozers. A total of 476 personnel are working to contain the remainder of the fires’ perimeter.

However, resources are low, stretched between the many fires burning across the state. Progress is slow moving, and the August Complex, which is burning in mountainous terrain, is a challenging one to fight. Lately, lighter winds and slightly cooler temperatures have offered some relief for firefighters.

Walker said the Forest Service is confident that the east side line is going to hold, and that they wouldn’t have labeled it as contained if they were not pretty sure that they would be able to stop the fire from spreading beyond that point. Factors such as the width and size of the line, the terrain, and the fact that the area just west of the eastern dozer line has burned out, add to their level of optimism. However, Walker noted that nothing is ever completely certain.

West of the containment line on the east side of the August Complex, there are still many hot spots, areas that are still smoldering or burning. Infrared flights, flights sent out to create a map of the different temperatures, are periodically flying over the contained fire perimeter to identify where those spots are. That information is used to help firefighters and those in charge of operations figure out where to direct their resources.

For now, most resources are being used to work the west side of the complex. Walker said the Forest Service would like to focus on the hot spots as well, but they just don’t have enough resources. There are 476 personnel, eight crews, including some inmate hand crews, five dozers, 19 water tenders and three helicopters at the scene.

To add to the challenges, the August Complex is burning in challenging mountainous terrain. The topography increases the complexity of fighting the fire. Walker explained that fire behaves differently in shoots, valleys, canyons, the east and west sides of slopes, and that the wind direction further complicates things. There are also snakes to watch out for and trees to cut down. Basically, there are a lot of factors at play. “The firefighters are working their tails off,” said Walker.

Personnel are working 16 hour days, clocking in around 6 a.m. and finishing up for the day around 10 or 11 p.m. “We only have a day shift, no night shift because we don’t have enough people,” she said.

Firefighters are allowed to work 14 days straight before they are required to take off for two days. As far as Walker knows, no one on the fire has had to time out yet.

Consistently light winds, and lower temperatures over the past few days have offered the firefighters a bit of respite. Temperatures dropped from the mid 100s to the mid 90s at lower elevations and to the 80s at high elevations, making the fire easier to fight. Light winds have helped keep the fire from running. Walker said, based on daily briefings with a National Forest Service meteorologist, that conditions do not likely to change any time in the near future. For now, it seems the Forest Service is managing to slowly contain the perimeter of the complex and gain on the fire.