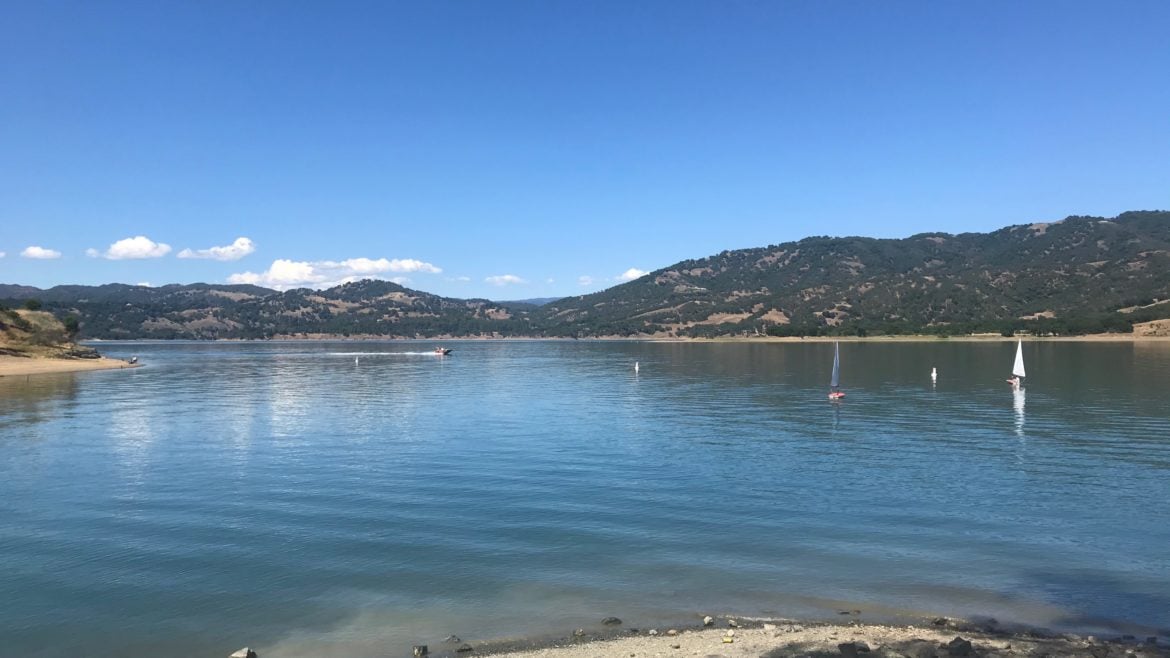 MENDOCINO CO., 8/21/20 — Earlier this week, the U.S. Army Corps of Engineers closed the south boat ramp at Lake Mendocino for the rest of the summer due to low water levels. The closure went into effect last Tuesday, August 18, at 9:00AM.

About a week prior, on August 9, the Army Corps closed the north boat ramp. Together, the two closures mean that recreators will not be able to use large vessels, essentially anything that can’t be carried into the water by an individual, for the remainder of the summer recreation season. The last time they had to close both ramps was six years ago in 2014.

Army Corps and Lake Mendocino officials had hoped to be able to keep the ramps open until Labor Day. However, they noted that without new water management tools they likely would have had to close the lake off to large boats in late June or early July. These management tactics helped the Army Corps provide more consistent, secure water throughout the summer, which will likely be more important as climate change continues to cause more unpredictable weather.

Lake Mendocino is one of three locations that researchers from the Scripps Institute of Oceanography at UC San Diego are using to test water management strategies using the latest weather and water forecasts through a program called Forecast Informed Reservoir Operations.

Forecast Informed Reservoir Operations, or FIRO, is a reservoir operations strategy using the best available weather and water forecasts, information, and technology to manage reservoirs and make decisions about retaining or releasing water.

FIRO is also being tested at Prado Dam in the Santa Ana River Basin and the Yuba-Feather River Basins.

Lake Mendocino officials said they were pleased that the water management they did with FIRO allowed them to keep the lake open through August even during such a dry year. Water management used by FIRO will likely become ever more important as climate change continues to cause sporadic, unpredictable weather conditions.

2020 is the third driest year on record for the Lake Mendocino basin, which flows into the Russian River. The first driest year was 1977, and the second, 1924.

Poppy Lozoff, Lake Mendocino’s acting park manager, said they came to the decision to close the south ramp after four reports of boats running into problems, such as grounding near the boat ramp, due to low water levels. Closing the ramps and decreasing accessibility was a hard decision for Lozoff and her team to make, but one they decided was in the best interest of public safety.

“It’s not a decision we take lightly,” said Lozoff over the phone. “We understand that the lake is a great resource for recreation in the community. There’s a lot of fisherman and recreational users and we also understand that boating is a great activity during COVID because you can launch and then isolate out in the lake.”

The water levels at the lake continue to drop. Water is being released into the Russian River at 165 cubic feet per second in order to comply with minimum in-stream flows for fish. The lake is losing about one foot of depth and 300 acre feet of volume per day. Although it is an extraordinarily dry year for both the lake and northern California, Nicholas Malasavage, chief operations manager at the U.S. Army Corps of Engineers, which operates Lake Mendocino, said the precipitous drop in volume and depth is actually very ordinary for the end of the summer. He is not concerned about the water levels themselves, only the hazardous conditions they create.

“I would say the acute concern is the public safety aspect,” said Malasavage. “But as far as 300 acre feet leaving the lake or losing a foot over the course of a week it’s not all that uncommon for this time of year because it’s been months since we’ve had significant rain, it is the summer time, water use is what it is, I can say the thing that changes from year to year of course is that pool elevation when we leave the rainy season. The amount of drop in the pool right now is not all that unusual.”

One of the Army Corps’s goals for Lake Mendocino is to keep the levels in the pool, or the lake, high enough to support full recreational activities during the entire summer season. Most summers, they do not have to close the boat ramps.

Lake Mendocino is a pilot project in FIRO’s effort to use the best available weather forecasts, information and technology to manage reservoirs. FIRO is assisting the Army Corps in managing Lake Mendocino for optimal recreational use and water security. FIRO is run by, among others, researchers at Sonoma Water, and the Scripps institute of Oceanography. The information they provide helps the Army Corps figure out how much water they should store or release during winter months. When the forecasts show dry conditions on the horizon, more water can be stored, and when they show rainy ones, water can be released to avoid floods. This research will likely be especially important as climate change continues to bring more extreme, sporadic, and unpredictable weather, including drier-dry summers and wetter-wet winters.

“To put it plainly, FIRO, by allowing us to hold onto water because of dry forecasts has allowed us to have a higher pool at this time than years ago,” said Malasavage.

Although Malasavage says the drop in water levels is not unusual, the low water levels at lake Mendocino do illustrate the notably dry weather experienced this year in Northern California.

The dry weather and lack of precipitation at the end of the rain year made water management all the more important for providing water security this year. Successful water management is the main reason District 1 Supervisor Carre Brown says we don’t need to be worried quite yet about water or a drought emergency in Mendocino County.

“We went into this year, this drought year with much more water being stored in Lake Mendocino behind Coyote Valley dam than has ever happened before, so that was really a blessing,” she said during a phone call earlier this week. Brown said she thinks it is this type of management that has allowed Mendocino County to continue to provide secure water sources for its residents throughout the summer and, so far, avoid a drought emergency. However, she also mentioned we can’t let down our guard, and we must remember that water is a limited resource here.

“We just don’t know what the future is going to bring,” she said. “In the fall we usually get fall rains and that helps add to the water supply. I don’t know if we’re gonna receive that, doesn’t seem very promising. But we all need to conserve water because we are in a drought.”