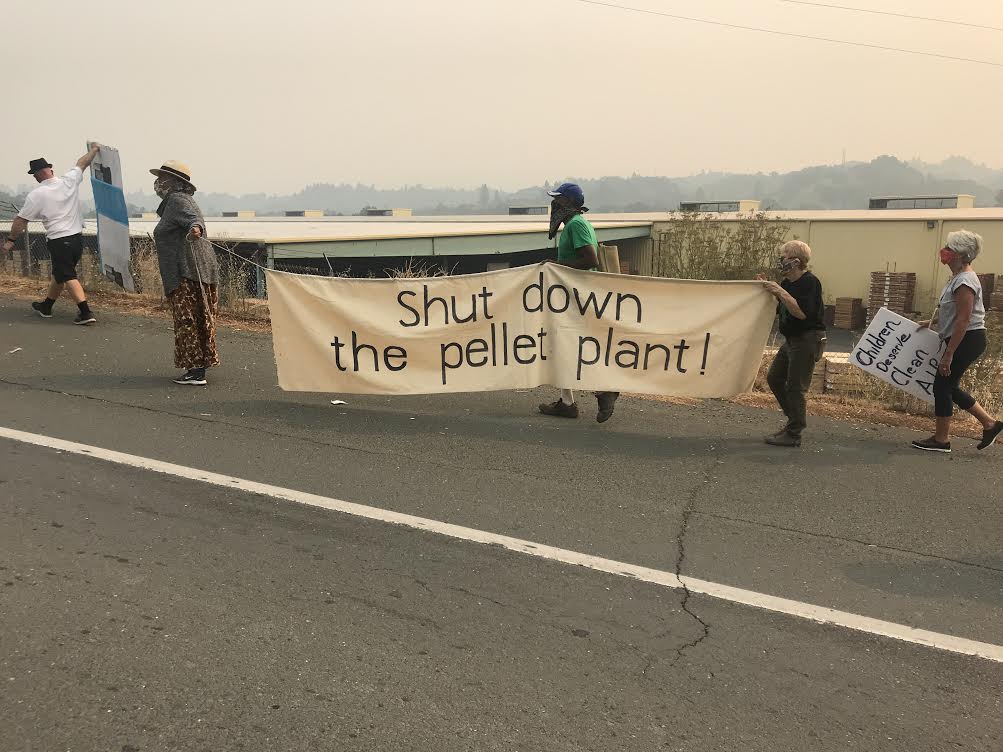 CALPELLA, 8/28/2020 — This morning around a dozen residents of the Calpella area gathered to protest the Mendocino Forest Products wood pellet plant, claiming the plant is releasing dangerous emissions. Protestors, citing health, safety, and environmental justice concerns, are asking that Mendocino Forest Products suspend operations of the plant and provide details about its emissions history.

The Director of Forest Policy at Mendocino Redwood Company and Humboldt Redwood Company, John Andersen, says he doesn’t understand why community members are concerned about unsafe emissions emanating from the plant, noting that Mendocino Forest Products is in compliance with all required permits and standards, something they worked hard to make sure was the case.

As quote in this previous article https://mendovoice.com/2020/07/fearing-for-their-health-group-wants-calpella-wood-pellet-plant-shut-down-during-covid/

Protesters called for change and described their concerns during a protest that lasted around an hour and a half. They convened at the Calpella post office at 9:30 a.m., before walking a short distance to the plant, where they stood with signs reading “we demand clean air,” “do you know what’s in the smoke and fumes?” “board of supes protect the public.”

Mendocino Forest Products, a manufacturer and distributor of redwood and Douglas fir goods owned by Sansome Partners, which also owns Mendocino Redwood Company and Humboldt Redwood Company, opened the wood pellet plant in Calpella in 2017. During the first two years of operation, the plant exceeded permissible levels of pollution dictated in their permit, including of “particulate matter 2.5 (PM2.5),” tiny liquid and solid droplets that, when inhaled, can enter the lungs and bloodstream, posing serious health risks, respiratory and otherwise. However, the vast majority of emissions visible on any given day is water steam.

In order to keep within their permits pollution limits, Mendocino Forest Products cut their production down to one-half of their original rate. They also worked with the Mendocino County Air Quality Management District, a state agency affiliated with Mendocino County and tasked with regional air quality planning, monitoring, and stationary source and facility permitting, in order to get into compliance with their permit. In November 2019, they passed their pollution source test, essentially were at or below the allowable emission levels dictated by their permit.

Opponents of the plant say they don’t trust the singular source test, and want more frequent pollution monitoring for the plant. “We are really upset that we have been operating since November with no assurances that the pollution coming from the plant has been sufficiently abated,” said Polly Girvin, a Calpella resident.

Again in a previous article John Andersen, Director of Forest Policy at Mendocino Redwood Company and Humboldt Redwood Company, said, “I get that there’s a plume that comes out of the plant, but that’s all steam…Concerned residents are certainly welcome to give us a call…We would be happy to explain what we have done to make sure we are meeting all that the air quality management district requires of us. They can visit the plant if they want to, we would be happy to let them do so.” On that occasion Andersen spoke about zoning requirements saying, “We complied with any required permits, if that is something that people are unhappy about they should probably talk to the county about how they allow building in industrial zones.”

Girvin also expressed that she does not feel the community is being adequately protected by the Mendocino County Air Quality Management District. “We’re here to say to the Air Quality Management District, you have failed in the public trust. You are our trustees for the sanctity of our community, the health of our children and elders. This is just not right, we are being treated like an adversary, rather than citizens that are concerned,” she said, standing on the side of North State Street as cars whizzed by, some honking in support, others slowing down to yell profanity at the group.

Another protestor, Willits Councilperson Madge Strong, expressed concerns similar to Girvin’s — that the plant is polluting the community of Calpella. She also does not feel that the county’s regulatory bodies are doing everything they can to keep residents safe. “I’m here because this pellet plant is polluting a community, mostly low income people, children, and elders, and the County Board of Supervisors and the Air Quality District are not doing their job to protect the public,” she said.

Strong noted that she is concerned that the effects of poor air quality from surrounding fires, coronavirus, and the plant, will compound and potentially make COVID more deadly. She said she wants the Board of Supervisors to suspend the operations of the plant while these other factors remain at play and wants the Board of Supervisors to do a thorough environmental review on the plant.

Because the the parcel of land that plant stands on is zoned as industrial it never received a full environmental review. Specifically, it is designated as a general industrial zone, an area “intended to create and preserve areas where a full range of industrial uses with moderate to high nuisance characteristics may locate.” Under this classification, forest production processing is not subject to environmental review, something the protestors feel is wrong.

The protestors voiced their frustration about the lack of public notice about the Wood Pellet Plant going up in Calpella. Because the wood pellet plant is not within 1000 feet of “sensitive receptors,” or people at high risk of being negatively impacted by pollution, the air quality district was not required to provide public notice for this project.

The group also wants the Board of Supervisors to open an investigation into the groups public health and safety concerns, they want a public hearing about why there was no public notice regarding the plant, ongoing monitoring of pollution, and Mendocino Forest Products to suspend the operations of the plant while low air quality from surrounding fires remains and COVID is a risk.

“We didn’t know, we were not notified of this plant going in. We just kept riding by here and seeing smoke and bad air and so we came down to check it out. This plant has been poisoning us, that’s what we believe,” said Priscilla Hunter, elder of the Coyote Valley Band of Pomo Indians.

“They’re just not listening to us, you know, and it’s like what they did to the Indians in the past. They’re poisoning the air, it’s like the blankets that they brought in that had smallpox and poisoned the Indian people. Now, 2020, they’re poisoning us again, when is this going to stop. We’re tired of being treated like this. This county is supposed to protect us, watch out for our public interest, and they’re not.”