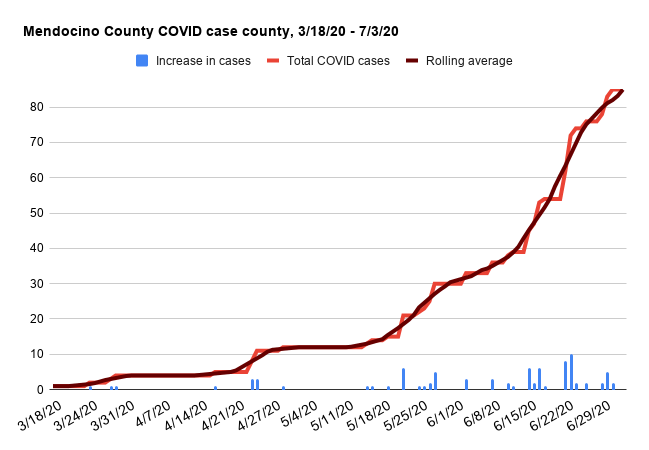 WILLITS, 7/4/20 — Six more cases of COVID-19 have been confirmed in Mendocino County today, all among firefighters, and an elderly Mendocino man who had been ill with COVID is dead, though the official cause of death has not yet been declared. Two of the firefighters are Mendocino residents, while the other four appear to from out-of-county, though all were working for Cal Fire. Social media posts have been made concerning the deceased, but we are not announcing his name pending official confirmation and notification of any family members — but it is known that he was among the people who fell ill as a result of the outbreak at the Assembly of God Church in Redwood Valley in May.

And with the coronavirus now spreading more rapidly than ever in California, Governor Newsom has begun to roll back some of the reopenings, closing bars and other kinds of indoor businesses in 19 counties. Mendocino County, however, is not yet on the watchlist for counties that might need to have quarantine measures rolled back. This week the public health officer released a new public health order which — while it did not create any new restrictions — did not further open up any businesses or activities.

Though official confirmation of details in the death of the Mendocino COVID patient, we do know a few things. The man was counted among Mendocino COVID cases, he was later discharged from the hospital in stable condition, and died after having left the hospital. As such, without a definitive declaration of cause of death we cannot say at this point if his death is directly attributable to COVID, was the result of some co-morbidity, or was unrelated, and we are not speculating.

Said Mendocino County CEO Carmel Angelo in a brief text exchange, “[We] don’t know cause of death as he died outside of our county. He was the gentleman that was hospitalized for COVID some time ago and was discharged in stable condition. No info on cause of death. Waiting to hear from the state.” Various posts have been made to social media, including by members of the man’s family, but the medical information we currently have is not definitive.

Regardless of whether this man died of COVID, the virus continues to spread with increasing rapidity in Mendocino County and California. At her last press conference on June 26, Mendocino Public Health Officer Noemi Doohan gave what were perhaps her most emphatic comments to date, saying that Mendocino County and indeed the entire state, are now in the beginning stages of a new surge in coronavirus infections that is expected to peak in September.

“What we are experiencing now is the beginning of the surge,” said Doohan.

She added that by the end of July more than 50 COVID patients are projected to be in the hospital each day, in Mendocino County. That number will not overwhelm the county’s three hospitals, but as those numbers grow it will become more difficult for hospitals to treat both COVID patients and perform their other regular operations — especially as doctors and nurses begin to fall ill, something that has been the case around the world.

Indeed, in the past two weeks the case count has roughly doubled, an increase that public health officials say is not mostly attributable to more testing, but represents real growth in community spread of the virus. In Mendocino the case count is doubling every two or three weeks, growth that matches an exponential growth curve.

In the United States 132,000 people have died of the disease, or as Doohan pointed out in her press conference, more than the 116,516 Americans killed in the First World War, and more than double the number of Americans who died in the Vietnam war. However, of these deaths only about 6,300 have been in California, as of yesterday. That means California accounts for only about 4.8% of COVID deaths in the U.S. whereas we are roughly 12.2% of the population of the U.S. Put another way, roughly 1 in 8 Americans live in California, while fewer than 1 in 20 COVID in U.S. deaths have been in California. This means California has so far been spared the worst of the pandemic, and could be in for some rough months.

This most recent local outbreak of COVID occurred at the Leggett Fire Station, and two of the infected people are Mendocino residents, the other four appear to be with Cal Fire and are now out-of-county. Public Health’s official COVID dashboard still reads at 85 cases, and in the press release describing the outbreak, officials say that these events occurred over the past 48 hours, and so it is not clear if the two additional cases have been added to the count or not. As of time of publication the dashboard on Public Health’s Facebook page reads 85 cases, but there has not been a two person increase in the North County regions in several days, indicating that it’s likely these cases have not been added to the total due to the Independence Day holiday weekend.

Here is the press release concerning the new outbreak in Leggett:

Dr. Noemi Doohan, Health Officer commented, “We are very thankful for the strong, coordinated effort between the County of Mendocino and CAL FIRE to respond to the recent oubreak at the Leggett Fire Station. Chief Gunn’s leadership in this rapidly evolving situation has been invaluable, and there is a strong indication that the outbreak has been contained due to the swift response and cooperation between the two agencies. We will continue to be vigilant in monitoring this situation until we are positive the outbreak has been fully contained.”

In response to these events, the Leggett and Laytonville Fire Stations will be deep cleaned and closed for the next seventy-two (72) hours. The County and CAL FIRE will continue to work together to test CAL FIRE staff and perform contact tracing investigations.

Chief Executive Officer Carmel J. Angelo remarked on the quick response between the agencies, “Mendocino County and CAL FIRE have been strong partners for many years, particularly since the 2017 fires devastated our community. CAL FIRE is here to protect us, and we are here to protect them. In light of these closures, we all need to remember to be firewise this 4th of July.”For more information please visit the County website at https://www.mendocinocounty.org/community/novel-coronavirus, or contact the COVID-19 call center at (707) 272-6052.

4 thoughts on “Mendo COVID patient dies, cause of death not certain — Doohan: “What we are experiencing now is the beginning of the surge” — 6 firefighters infected”