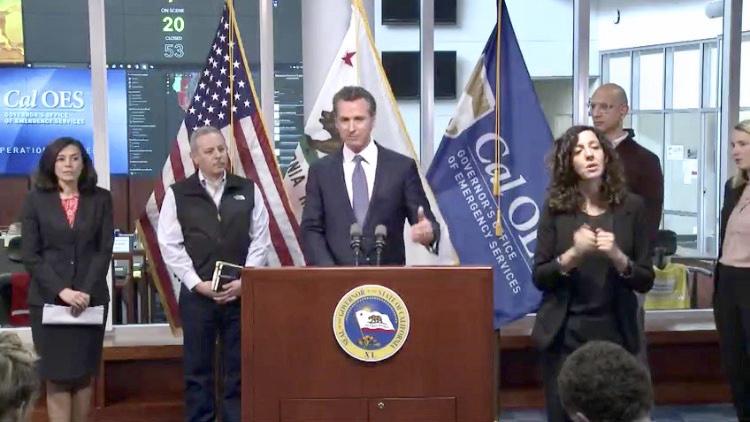 Newsom at the press conference on Sunday, March 15, 2020, discussing measures to address the spread of COVID-19.

MENDOCINO Co., 7/13/20 — As part of the efforts to limit the spread of COVID, Governor Gavin Newsom issued an executive order on Tuesday, June 30 allowing local governments to prevent evictions of renters through September 30. The order was an extension of one he passed on March 16.

The order, Executive Order N-71-20, aims to limit the spread of COVID by allowing people who cannot pay rent because of the pandemic to not become homeless and thus transmit the virus more easily. Per the order, the actual decision on enacting eviction protection still lies with local governments.

However, there are state protections against evictions in place even if local governments do not pass their own ordinances. On March 27, Newsom passed another order directly banning the enforcement of residential evictions. In addition, the California Judicial Council, which oversees the state courts, passed an interim measure on April 6 suspending all eviction summons to court until 90 days after Newsom has lifted the state of emergency.

These protections do not apply for people who were evicted prior to March 27 or for reasons not related to the COVID pandemic. The orders also make clear that they do not forgive rent, and it is unclear how (or if) months of back rent will be paid, or how the state will avoid a wave of evictions once the court measure is lifted.

The Mendocino County Board of Supervisors took up the issue in March and passed an ordinance; Fort Bragg passed its own local ordinance with additional provisions; Ukiah, Willits, and Point Arena have so far decided to rely on the state and judicial orders.

The countywide ordinance passed by the Board on March 24 prevented evictions of people who did not pay rents (evictions for other reasons can still happen). It includes both residential and commercial evictions while the state order only applies to residential ones.

When asked whether the county would act on the newest order from the governor, Third District Supervisor John Haschak said that he was not aware of any plans that Mendocino County had to pass its own eviction moratorium. Second District Supervisor Ted Williams said that he planned to take the issue up with the Board but that they did not have any plans to pass a new county ordinance at the moment.

The City of Fort Bragg approved an urgency ordinance on March 30 protecting commercial renters in addition to residential ones. The city has extended the order twice — once through June 30 and again through July 31.The Fort Bragg City Council will decide on July 27 at their meeting whether to extend the order a third time. Thus far it is the only incorporated city in the county to enact its own ordinance.

The City of Ukiah decided not to adopt its own local ordinance in March when Newsom first issued the order. Thus far, it has relied on the state and judicial orders.

“The city’s approach is that if there are [state and judicial] restrictions that prevent residential evictions, then the city will rely on those rather than take local action,” explained City Attorney David Rapport in a brief interview. “There are legal reasons for that,” he added, elaborating that if there were a lawsuit against the order, it would be against the state judicial system rather than the City of Ukiah.

The City of Willits also has not adopted an urgency ordinance. “The city doesn’t need to enact anything right now,” said City Manager Stephanie Garrabrant-Sierra, adding that “evictions are a county thing and not a city thing” and that “the city wants to comply with the county order.” She explained that the state and county orders already prevented evictions that she did not believe that the city needed to pass an additional ordinance.

From Point Arena, Deputy City Manager Paul Andersen explained in a brief interview that the city does not currently have an eviction moratorium in place, and that no City Council members have expressed interest in passing one.

Newsom issued the latest extension to his March 16 order as coronavirus cases continue to rise at record-breaking rates in California and across the U.S. According to the Los Angeles Times COVID tracking page, California averaged 8,375 new cases and 96.9 deaths per day over the past week.

The eviction moratorium has generated some opposition from landlords, as reported by the Los Angeles Times. However, it has also received overwhelming support from activists and grassroots organizations, over 140 of which signed this letter to Newsom back in March.

The full provisions in the new order can be read in the press release below:

The order also addresses a variety of issues in response to the pandemic, by extending provisions in earlier orders which allow adults to obtain marriage licenses via videoconferencing rather than in-person during the pandemic; waive eligibility re-determinations for Californians who participate in Medi-Cal, to ensure they maintain their health coverage; suspend face-to-face visits for eligibility for foster care; and permit In-Home Supportive Services (IHSS) program caseworkers to continue caring for older adults and individuals with disabilities through video-conferencing assessments.

The order also extends waivers temporarily broadening the capability of counties to enroll persons into the California Work Opportunity and Responsibility to Kids (CalWORKs) program, allowing for self-attestation of pregnancy and conditions of eligibility, and waiving in-person identification requirements.

In addition, the order extends provisions allowing for mail-in renewals of driver’s licenses and identification cards, to limit in-person transactions at the Department of Motor Vehicles, and extends timeframes related to the payment of real estate license application and renewal fees and continuing education requirements for licensees.