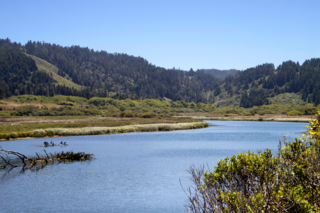 View of the Ten Mile River from the trail.

The trail was funded by the State Coastal Conservancy and features a picnic area and three benches. One of the benches is dedicated to longtime Mendocino Land Trust supporter Betty Stechmeyer.

The Mendocino Land Trust developed the trail as part of a larger project headed by the The Conservation Fund, The Nature Conservancy, and the Coastal Conservancy* to protect the the entire 1,309 acre Smith Ranch. The area includes a variety of ecosystems, such as coniferous forests, riparian woodlands, shrublands, sand dunes and brackish marsh, which provide habitat for endangered and threatened wildlife and plant species such as tidewater goby, coho salmon, steelhead trout, Point Reyes horkelia, and Howell’s spineflower. Dogs are not allowed on the trail to protect the western snowy plovers that nest in the dunes.

For more information about the trail, you can visit the Mendocino Land Trust website and read the press release below:

The long awaited Old Smith Ranch Trail is now open. The trail cuts an elegant, 2.1 mile path along the South Bank of the Ten Mile River. The Mendocino Land Trust has worked diligently for ten years to acquire, protect, and provide access to this beautiful stretch along the Ten Mile River, north of Fort Bragg. The trail – funded by the State Coastal Conservancy – features a picnic and parking area, as well as three benches with spectacular views.

The Mendocino Land Trust in partnership with the Conservation Fund, State Coastal Conservancy, Nature Conservancy, and Smith/Perry family worked together to conserve this remarkable 49-acre property. This project is part of a larger, multi-year effort to permanently protect the 1,309-acre Smith Ranch, located east of Highway One and the Ten Mile Dunes. “Our staff put hundreds of hours into this project, from negotiating the acquisition to obtaining permits and designing and constructing the trail. The result speaks for itself. It is a magnificent addition to the Mendocino Land Trust’s trail system,” said Roger Sternberg, Interim Executive Director.

The project protects a significant portion of the Ten Mile River and estuary, which is host to coniferous forests, riparian woodlands, shrublands, sand dunes and brackish marsh. All of these habitats provide safe harbour to endangered and threatened wildlife and plant species, including tidewater goby, coho salmon, steelhead trout, Point Reyes horkelia, and Howell’s spineflower. An offshoot of the trail threads under the Ten Mile bridge – where hundreds of swallows are currently nesting – and connects to the Ten Mile Dunes Natural Preserve. With existing parklands just to the west, the property serves as a critical open space buffer for wildlife. In order to protect the federally endangered western snowy plovers that nest in the Ten Mile Dunes, dogs are not allowed on the trail.

This project is a key step in furthering the mission of the Mendocino Land Trust, both through the protection of open space and endangered species habitat as well as the provision of public access to a long-private plot of land.

The Mendocino Land Trust has been a leader in land conservation, stewardship and habitat restoration in Mendocino County for more than 40 years. Well-known for its extensive network of coastal beaches and public access trails, the trust also engages in conservation projects countywide. Since 1976, Mendocino Land Trust has worked with willing landowners to protect more than 14,000 acres of forests, wildlife habitat and agricultural lands in Mendocino County. For more information, visit its website at MendocinoLandTrust.org

*A previous version of this article stated inaccurately that the project to protect the Smith Ranch was headed by the Mendocino Land Trust. It has since been corrected.