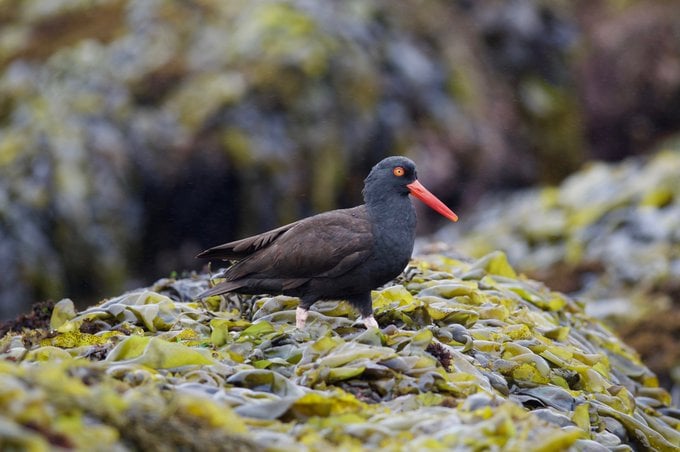 A black Oystercatcher, courtesy of NOAA

FORT BRAGG, 7/21/20 — For the past several years in a row, black oystercatchers, a year round avian resident of California’s rocky, coastal tidelands have barely been able to raise their young. Warmer waters altered the food web and decreased food availability so there was only just enough food for adult oystercatchers to get by and not enough to support chicks. This year, colder ocean conditions have brought good tidings to the poorly named oystercatchers, which don’t eat oysters at all. Based on climatic conditions, it seems that this year is the birds’ chance to make up for lost time and bring up their population numbers. However, oystercatchers are at risk of facing another childless year due to a different threat — disturbance from humans and drones.

Tim Bray, president of the Mendocino Coast Audubon Society, a chapter of the National Audubon Society, a nonprofit dedicated to protecting birds and the places they need, worries that as tourism picks up this summer, humans will disturb nesting black oystercatchers by venturing too close to the birds nests on the rocky ledges above the ocean, or by flying drones, which the oystercatchers perceive to be predators, overhead.

In order to avoid unsettling the birds, Bray encourages beach-goers to stay away from the edge, where oystercatchers may be nesting, and most importantly, not to fly drones.

Bray considers the crow-sized black bird, which he described as wearing red lipstick and pink pajamas, due to its brilliantly bright orange beak and shockingly pink feet, an icon of the Mendocino coast.

Oystercatchers habitat includes the Pacific Ocean intertidal zone from Baja California Sur to the Aleutian Islands in Alaska, but a significant portion of the birds — between 4,749 and 6,067 — live in California, with one of the highest concentrations anywhere in Mendocino County.

In Mendocino, like everywhere they live, oystercatchers play an important role in the intertidal ecosystems through their predation, helping to control populations of invertebrates such as mussels, limpets, whelks, urchins, crabs, marine worms and beetle larvae.

To nest, the oystercatchers, which mate for life, find a spot on the rocks in the Pacific Ocean intertidal and scratch away the grass and dirt to make their simple home.

The same rocks, which jut out above the beautiful Pacific, attract humans, who want a better view of the wild ocean. Oystercatchers are particularly wary of humans and the birds fly away from their nests when humans get to close, leaving their eggs, chicks, or fledglings — chicks that learn to fly and leave the nest on their own, alone and unable to fend for themselves in the face of predators, such as ravens, which quickly swoop in for an oystercatcher snack.

The continent wide oystercatcher population, of 12,000 to 18,000 birds, is generally stable, but they are particularly vulnerable to the rapidly changing coastal environment, found a peer reviewed population assessment of black oystercatchers by Audubon California, Mad River Biologists, a biological consulting firm, and the US Fish and Wildlife Service’s Migratory Bird Program. Climate change and resulting ocean acidification, sea level rise, increased storms and king tides, and increased disturbance by humans all threaten the oystercatcher population.

In 2012, Mendocino Audubon started participating in an ongoing collaborative black oystercatcher conservation project, by assessing oystercatcher populations and breeding success. Audubon chapters from San Luis Obispo county to Mendocino county participate in this survey collection, recording how many nests the birds have, where they nest, how many eggs they hatch, and how many chicks end up becoming fledglings.

Mendocino survey results from 2012 through 2018 show the number of fledglings decreased, except for a large outlying spike in 2015. In 2017 and 2018, more eggs were hatched, and still few chicks made it to the fledgling stage of life. Bray attributes this to a warming ocean.

“It’s been an interesting decade in the near shore marine environment,” said Bray. In 2013, the blob, a 1,000 mile wide and 300 feet deep mass of water that ranged between 4 and 10 degrees above average ocean temperature, depending on time and place, appeared. Late in the next year, a large El Niño arrived, resulting in unusually warm ocean temperatures, up to 5 degrees higher than normal, in the central and east Pacific Ocean until 2016.

“That had a profound and in some cases catastrophic impact on ecosystems,” said Bray. “We saw a lot of effects of that here on the coast. Basically everything that was living in that [near shore marine] ecosystem had a really difficult time reproducing for several years in a row. There were a couple of years when oystercatchers produced almost no fledgling young at all.”

According to the National Aeronautics and Space Administration (NASA), during El Niño events, a thicker than usual layer of warm water in the eastern Pacific inhibits upwelling, a process which brings cold, nutrient-rich water up to the surface. Consequently, the ocean becomes much less productive, providing less food for oystercatchers (and other creatures), which live off limpets, mussels, and other sea life.

This year is different. The ocean is cold and windy. Oystercatchers are a long-lived bird species. They can survive for up to 20 years, so it’s possible for the birds to make up for a few years of low reproductive success in a good year. This makes good years extremely important for black oystercatchers. If they cannot capitalize on the good climate conditions and have a successful reproductive year, the population will start to decrease. “[This pattern of reproduction] makes them extremely vulnerable to habitat disturbance, because habitat disturbance can occur just as they were about to recover and set them right back again,” said Bray. “That’s probably our number one concern — disturbance by humans, and the new angle to that is drones.”

In order to avoid disturbing the oystercatchers, Bray encourages people to “stay back from the edge.”

“The signs are already up advising that for your own personal safety, but what you don’t realize is that you may be encroaching on a nesting bird,” he said. “There are more than just oystercatchers that are nesting right there in the rocks and in the cliffs basically right underneath your feet. To the extent possible stay back from those rocky points and above all don’t fly drones, the shore really needs to be a no fly zone.”

“These are an iconic bird for the coastline,” Bray continued. “We have a large and healthy population and it’s almost unique here because they are so abundant. They live right here in this little narrow strip, and it’s all they got.”