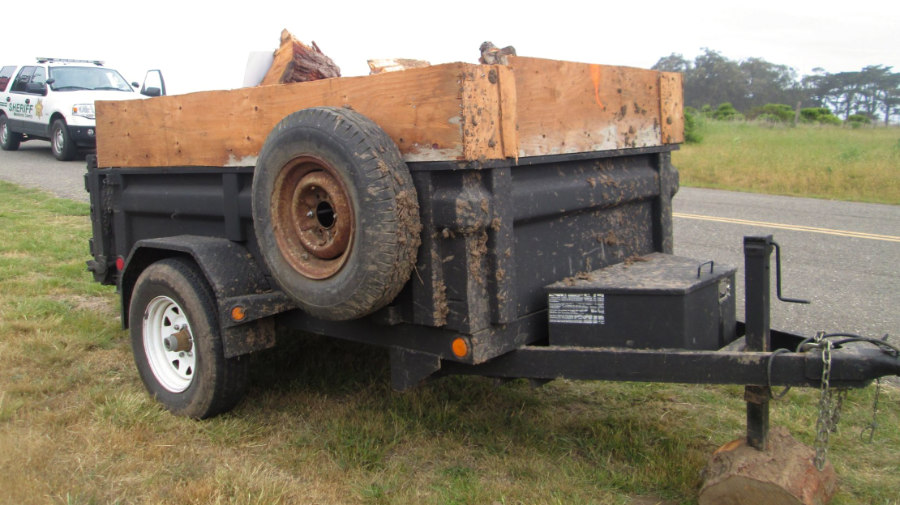 The trailer in question.

MENDOCINO Co., 5/17/20 — The Mendocino County Sheriff’s Office is seeking the owner of a trailer which they recovered after arresting a man for allegedly burglarizing multiple sites, and being in possession of stolen property. (See the picture of the trailer above)

The man was first suspected of a burglary in Point Arena, then was found near Fort Bragg and arrested for possession of stolen property, and after more investigation the trailer was found. The trailer appears to be stolen but the MCSO have not found the owner.

Here is the press release from the MCSO with more details:

During the course of that investigation Deputies developed a person of interest identified as Terry Kelly.  Deputies also confirmed Kelly was on active felony probation out of Amador County for possession of stolen property and his probation included a 4th Amendment waiver.

At approximately 1410 hours, Deputies contacted Kelly at a vehicle parked in the 24000 block of Highway 20 in Fort Bragg after receiving information he was a stranded motorist in that area.

During that contact, Deputies observed Kelly’s vehicle was loaded with a large amount of miscellaneous property.

Deputies conducted a search of Kelly’s vehicle and discovered a variety of packaged unopened consumer goods.

Upon further investigation, Deputies determined those consumer goods were recently stolen from FBA Inspection in the City of Fort Bragg and the burglary had been reported to the Fort Bragg Police Department.

Deputies arrested Kelly for possession of stolen property and he was transported to the Mendocino County Jail where he was ultimately booked and released because of the California’s current zero bail provision.

Deputies continued their investigation and also learned Kelly was in possession of an unreported stolen dump trailer parked at a residence in the 44000 block of Pomo Lake Circle in Irish Beach [Manchester, California].

With the assistance of the California Highway Patrol, Deputies responded to this location and recovered the stolen dump trailer.

During an inspection of the trailer, it was discovered the attached license plate did not belong to the trailer and was associated to another unreported theft that occurred in the 13000 block of Point Cabrillo Drive in Manchester, California.

At the present time, the trailer is suspected stolen property.  Deputies have not been successful in identifying the owner of the trailer and are asking for the public’s assistance.

The trailer was possibly taken from a location on Airport Road in Fort Bragg, California.

The time frame when the trailer was taken is unknown. The trailer has been recently spray-painted and most or all identifying marks removed.

Photographs of the trailer can be found on the Mendocino County Sheriff’s Office Facebook page at the following link:

If you recognize this trailer or you know who the possible owner of the trailer might be, please contact Mendocino County Sheriff’s Office Deputy Martin (Incident Number 20-11935) at 707-961-2421 or by email at [email protected].

The Mendocino County Sheriff’s Office would also like to thank the Fort Bragg Police Department and the California Highway Patrol for their provided assistance during this investigation.