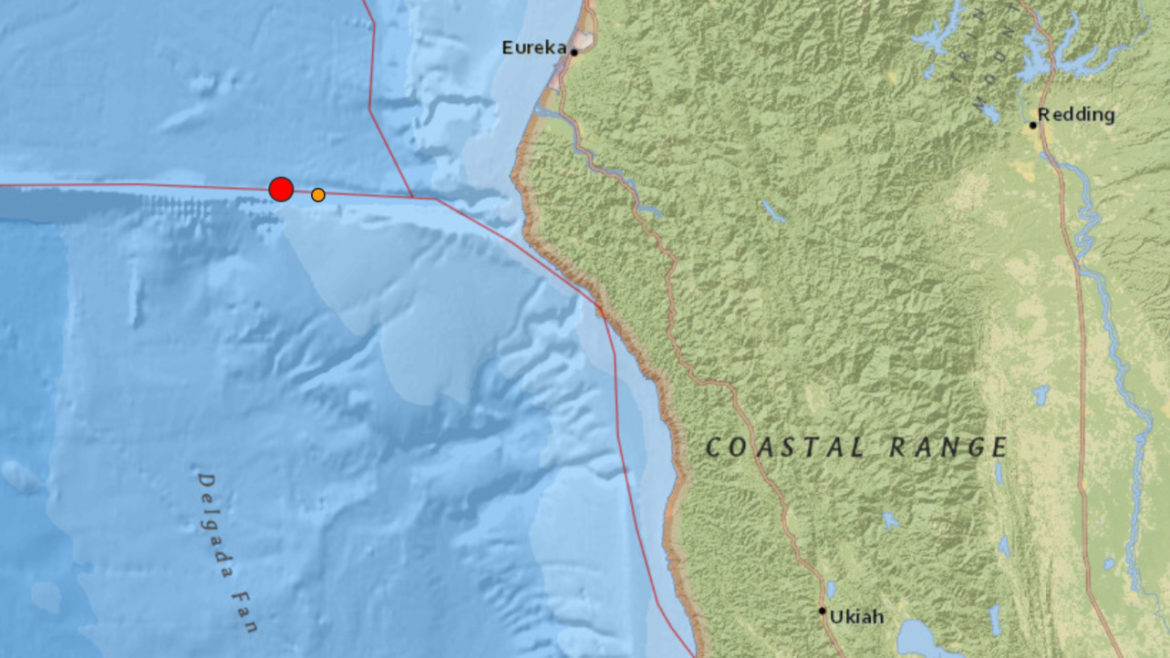 The location of the epicenter of the quake which struck today, 3/8/2020, courtesy of the USGS.

UPDATE 11:40 p.m. — A second significant earthquake struck the Humboldt coast at 11:32 p.m. on Sunday evening, with initial estimates from the USGS measuring the second temblor at a magnitude of 4.9, smaller than the earlier quake, and striking at a depth of 1.4 miles, with an epicenter somewhat to the west of the larger tremor, or about 75 miles west of Petrolia.

In actuality the USGS reports that a number of smaller quakes have hit since the 5.9 struck just before 8 p.m., though these have been in the 2.5 range, and thus probably not felt on land, or in Mendocino.

No tsunami is expected.

Did you feel it? You can report it to USGS here.

WILLITS, 3/8/20 — An earthquake measuring 5.9 struck the coast of Humboldt County this evening and was felt as far away as Willits. The temblor rattled the North Coast at 7:59 p.m. and was located near the Mendocino Triple Junction, where three tectonic plates meet in the Pacific Ocean just off the coast of Cape Mendocino, some 53.5 miles (86km) from Petrolia on the Humboldt Coast.

The quake had a depth of 1.4 miles (2.2km), which is relatively shallow. Anecdotal reports from readers indicate that the quake was felt as far away as Laytonville, Covelo, Point Arena, Redwood Valley and Willits in Mendocino County.

You can report whether you felt it and how to the United States Geological Survey at this link.