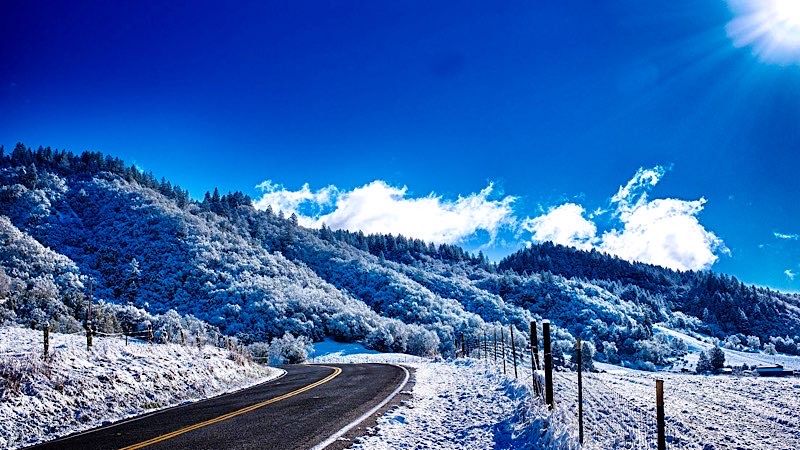 UPDATE 3/15/20 11:45 a.m. — The winter storm has brought significant snow fall to higher elevations around Mendocino County on Saturday evening, including snow on U.S. Route 101 at the Ridgewood Summit, and reports of over nine inches in more northern county mountainous areas like Bell Springs Road in Laytonville. The storm also caused a number of power outages around north county, including about 1,115 customer accounts (which can be one household or business) in Covelo beginning around 2 a.m. Sunday morning. PG&E is currently working on that outage, and has not provided an estimated time for that the power will be restored.

More winter weather is forecasted through Sunday evening. The National Weather Service’s radar station in Eureka, located on Bunker Hill, is currently undergoing repairs, and will not be back. online until Monday, March 16.

The storm was the first winter weather event in more than a month due to an unusually warm and dry late winter and early spring on the North Coast. Firefighters also responded to a residential structure fire on Sherwood Road this morning reportedly started by a chimney flue catching fire.

UPDATE 9:45 p.m. — The National Weather Service’s Eureka office has updated their estimate of snowfall, saying now that even more snow and rain is expected, and that snow could fall as low as 1200 feet in the north and 1800 feet in southern Mendocino. The snow may affect driving conditions on U.S. Route 101 north of Willits, or around Rattlesnake Pass, and even on the Ridgewood Grade between Willits and Ukiah. SR-20 between Willits and the coast may also see some snowfall.

The mountain passes of Humboldt and Trinity counties will likely see major traffic issues. Light snow is even expected in the hills above the 253 and above the Anderson Valley.

UPDATE 6:00 p.m. — The National Weather Service is predicting a major snowfall in the Sierra Nevada and substantial snowfall at higher elevation in the Coastal Range, so expect mountain passes to be closed or dangerous.

A winter storm watch remains in place through 11 p.m. Sunday in North Coast areas above 2500 feet in elevation.

A winter storm warning remains in effect from 5 AM Saturday to 11 PM Sunday for elevations above 2500 feet across Trinity, interior Del Norte and Humboldt Counties, northeast Mendocino County, and northern Lake County. pic.twitter.com/YadYOzPgeF