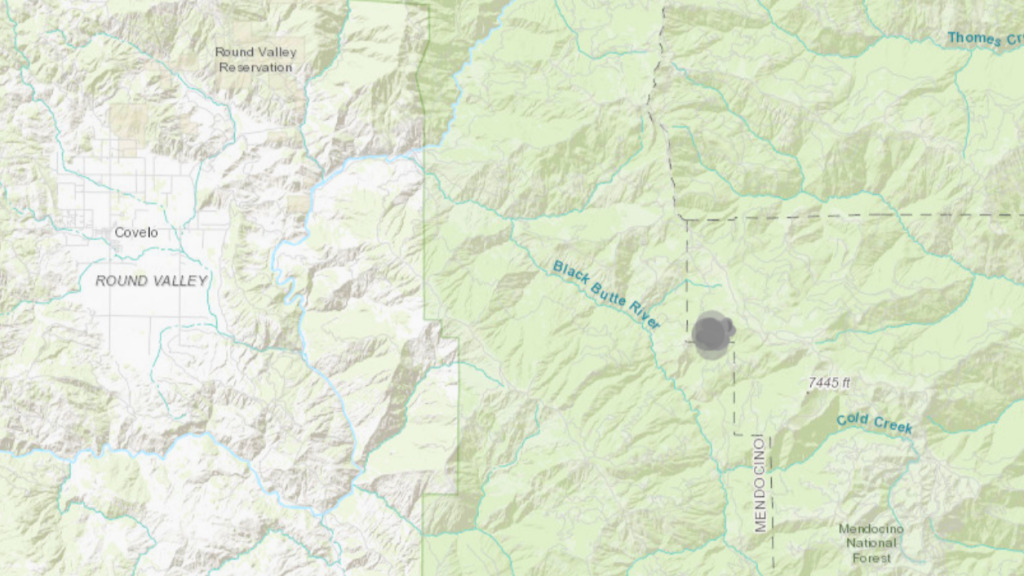 The Baseball Fire's location according to satellite date, and relative to Covelo, as of March 2, 2020. The grey color indicates cooled hot-spots.

WILLITS, 3/2/20 — Mendocino County’s first sizable fire of the 2020 fire season, the Baseball Fire, has been 90% contained and stands at 211 acres. This very early season fire has been burning in the Mendocino National Forest about 15 miles east-southeast of Covelo, on the Glenn-Mendo county line.

The fire jumped significantly in size in the past few days due to an intentional firing operation conducted by firefighters. The fire is being taken care of by the United States Forest Service (USFS), though Cal Fire also responded in the early stages of the fire.

A common method of combating wildfire in more remote areas is to build a strong containment line where it is more feasible, or where in a more accessible area , and then to set “backfires” between that strong fire control line and the original fire. This process thins out avaliable fuels and brings the wildfire’s growth under human control. The Forest Service preformed just such operations in the past several days, which explains the fire’s jump from around 60 acres to 211 — it was not the result of the fire being out of control, but rather of the fire being well controlled.

According to the Forest Service 35 personnel remain on the fire “mopping up.”

Here is is the USFS’s press release:

WILLOWS, Calif., March 2, 2020 — Personnel on the Baseball Fire made good progress over the weekend and raised the containment on the incident to 90 percent. The fire remained at 211 acres. The Baseball Fire is located about 15 miles southeast of Covelo in Mendocino and Glenn counties.

There are about 35 personnel assigned to the incident including engines and crews from the Mendocino and the Six Rivers national forests. Crews will continue to mop-up and patrol the fire until the fire is considered out. After a windy weekend, decreasing wind and temperatures in the 50s are expected early in the week.

It has been determined that the Baseball Fire started from previous pile burning on the Baseball prescribed fire project on Tuesday, Feb. 25. The fire has burned in grass, brush and timber in steep, rugged terrain at a low to moderate rate in a mosaic pattern, similar to the desired effects from a prescribed fire. There are no immediate threats to property or structures.
Information is available on InciWeb at https://inciweb.nwcg.gov/incident/6679/.