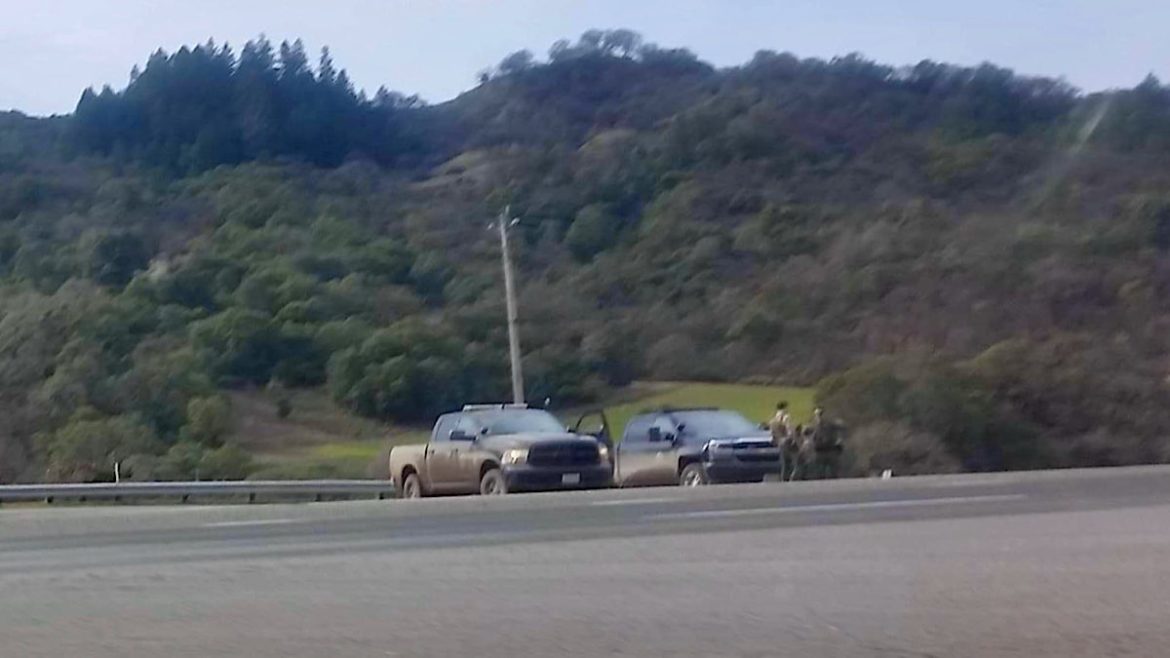 Law enforcement officers wait at the entrance to Reeves Canyon Rd. on the morning of Sunday, Jan. 19th,

Editor’s note: This is a developing situation and has been continuously updated. For the initial reporting scroll down.

UPDATE 7:40 p.m. — The MCSO has issued a press release in this incident which can be read below. The press release largely repeats the information provided by officials earlier today in interviews, but adds that the man was 34 years old, carrying a high powered rifle, and had informed friends of suicidal thoughts since becoming a fugitive on Friday, when he fled, prior to a sentencing hearing, after being convicted in a court martial.

UPDATE 2:50 p.m. — The MCSO has provided a great many more details and the situation is a complex one. The suspect appears to have committed suicide, with a gun, after local law enforcement and federal officers approached him, after a car chase that began yesterday. The deceased is most likely a United States Air Force serviceman who fled Nellis Air Force Base near Las Vegas, Nevada, on Friday Jan. 17*, after being court martial on an unknown charged.

MCSO deputies, the local SWAT team, possibly CHP and federal agents were involved this morning, but according to Sheriff Matt Kendall, no shots were fired by law enforcement, and instead the suspect was found deceased with a gunshot wound, apparently having taken his own life — meaning that this is not an “office involved shooting,” as has been widely rumored.

In a brief interview Mendocino County Sheriff Matt Kendall and Captain Greg Van Patten explained that the identity of the serviceman, or airman, is being withheld pending notification of next of kin. Indeed, we cannot absolutely confirm that the deceased is the same airman who fled the court martial in Nevada, but it is extremely probable.

On Friday, at Nellis AFB, a court martial was being conducted against an airman on a charge that we are not aware of. After being convicted, a recess was held before sentencing, and it appears that at that time he fled the base.

Yesterday afternoon, around 4 p.m. California Highway Patrol officers on U.S. Route 101 spotted a vehicle, south of Ukiah, matching the description of the fugitive’s and initiated a traffic stop.

The fugitive was in a 2018 Jeep Wrangler and also fled the traffic stop. He continued up the 101 until turning off on Reeves Canyon Rd., at the bottom of the Ridgewood Grade in the Redwood Valley area. The CHP pursued, but eventually could not follow the Jeep due to the conditions of the road.

That road dead ends some eight miles into the hills and as it was getting dark law enforcement guarded the opening through the night. Sometime around midnight agents of the Air Force Office of Special Investigations from Beale Air Force Base near Marysville arrived and took over surveillance of the road.

At first light the Air Force agents drove in to search for the fugitive and eventually called in MCSO deputies as reinforcement, finding the Jeep some ways up a difficult to access fire road. The deputies arrived and deployed two separate drones to approach the parked Jeep. They observed that the engine was cold but a heat signature was given off from inside the Jeep.

At around 11:48 a.m. a gunshot was heard and the local SWAT team in their CRV (citizen rescue vehicle, an armored vehicle) approached, but the CRV could not continue up the muddy road. The SWAT team then continued on foot and found the fugitive some yard behind his Jeep, dead from an apparently self-inflicted gunshot wound.

UPDATE 1:20 p.m. — Based on scanner traffic it appears that the situation has resolved and is now “code 4,” often meaning that things are under control. Scanner chatter indicates that law enforcement made contact with the suspect outside of the vehicle and that they have searched the vehicle.

ORIGINAL 1:13 p.m.
WILLITS, 1/19/20 — Law enforcement were involved in a possible stand-off situation on Reeves Canyon Rd. this morning, some eight miles from where it meets U.S. Route 101. One shot was fired, apparently by the suspect involved, and Mendocino County Sheriff Matt Kendall has stated that no Mendocino County Sheriff’s Office deputies fired shots. It appears that some California Fish and Wildlife game wardens were also involved.

Information is still very sparse, and the following comes from listening to the scanner along with a brief interview with Sheriff Kendall to confirm a few facs — expect an update presently.

Here’s what we know: Law enforcement was involved in a chase or search for a suspect last night, but it’s unclear if this morning incident is related. At around 11:48 a.m. today an MCSO deputy stated over the scanner that shots had been fired. Rumors began to spread that the deputies had possibly returned fire, but in an interview Kendall stated that this is not the case.

Several members of law enforcement responded, as did fire departments and ambulances, with medical and other emergency personnel staging some miles back from the scene. A report went out over the scanner that this may have been an “11-31” or suicide attempt, and Kendall told us that it was unclear if the shot fired, presumably by the suspect, was a warning shot, a shot in the direction of deputies, or a self inflicted gunshot.

A request was made for the local SWAT (special weapons and tactics) team, which is made up of officers from various local law enforcement agencies, including the MCSO and the Ukiah Police Department (UPD).

Judging from scanner chatter it appears that at this point law enforcement personnel were in a stand-off with a suspect in a vehicle, shielding behind cars and potentially the county’s CRV, which is an armored vehicle. Law enforcement then sent an aerial drone to get a closer look at the vehicle, but reported that the suspect was not visible as the windows had fogged up.

At some point the ambulance, or possibly multiple ambulances, staged at the scene were released — this often indicates the ends of a situation.

We will continue to update as more information become available and expect confirmation of the narrative from official sources in the next half hour.

Synopsis:
On 01-19-2020 at 7:30 AM, Deputies from the Mendocino County Sheriff’s Office were detailed to assist the United States Air Force in the 8000 block of Reeves Canyon Road in Redwood Valley, California.

Deputies learned an Air Force service member (32 year-old male) had been the subject of a court-martial on 01-17-2020 at the Nellis Air Force Base in Las Vegas, Nevada.

Prior to being sentenced, that same day, the service member absconded from the court proceedings.

Based upon the desertion, an arrest warrant was issued for the service member.

On 01-18-2020 at approximately 4:00 PM an officer from the California Highway Patrol attempted a traffic stop on the wanted service member’s 2018 Jeep Wrangler south of Ukiah.

The Air Force Special Agents were notified of the attempted apprehension and responded to Reeves Canyon Road where they conducted overnight surveillance of the roadway at the intersection of Highway 101.

Once daylight arose on 01-19-2020 the Air Force Special Agents began a search of Reeves Canyon Road in an attempt to locate the Jeep Wrangler.

This resulted in the discovery of the Jeep Wrangler parked on a secluded fire trail road in the 8000 block of Reeves Canyon Road (approximately 8 miles from intersection of Highway 101).

At this point, Deputies began to develop a plan to approach the Jeep Wrangler.

During this planning process, the Deputies learned the wanted service member had communicated suicidal statements with a friend after his desertion.

Because of the potentially dangerous circumstances, Deputies asked for the assistance of the Mendocino County Sheriff’s Office UAV (Unmanned Ariel Vehicle) which is used in connection with Search & Rescue operations.

The UAV was deployed and conducted an ariel viewing of the Jeep Wrangler but the operator was unable to see (with attached video transmitting camera) inside the vehicle as its windows were foggy.  The UAV had to return to the staging area because the UAV’s battery was almost exhausted.

A short time later the UAV was redeployed and a further viewing of the Jeep Wrangler was conducted.  This time there was an object, similar to a person, noted inside the vehicle.

Sometime thereafter a single shot from a firearm was heard in the immediate area and the UAV had to return to the staging area because the UAV’s battery was almost exhausted.

Based upon this new information, the Mendocino County Multi-Agency SWAT Team was requested.

On 01-19-2020 at approximately 1:30 PM the Multi-Agency SWAT Team used the CRV (Citizen Rescue Vehicle) to approach the Jeep Wrangler.

During this time, the wanted service member was located deceased approximately 30 yards away from the vehicle in an elevated position on the hillside adjacent to the vehicle.

Initial scene investigation suggested the wanted service member had committed suicide by use of a high powered rifle.

At this time the wanted service member is not being publicly identified pending notification of next of kin.

All inquires in regards to the wanted service member are being referred to the United States Air Force Office of Special Investigations Public Affairs Officer Linda Card at 1-877-246-1453 or 571-305-8010.

The Mendocino County Sheriff’s Office would like to thank the following agencies for their assistance during this incident:

*An earlier version of this article mistakenly gave this date as yesterday, Saturday, when in fact the man fled on Friday.