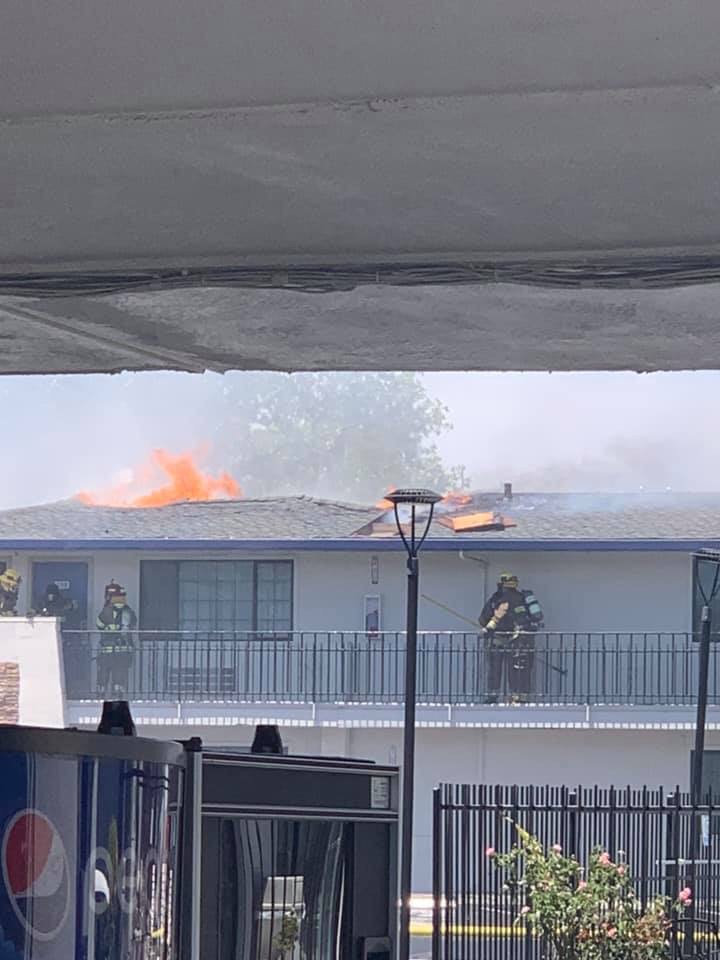 UPDATE 4:40 p.m. — The fire is knocked down though clean up should continue for a while. The cause of the fire has not been announced.

A substantial part of one of the buildings of the hotel was badly burned and partially destroyed. Other buildings were unaffected.

UPDATE 3:00 p.m. — It appears that the flames may be dying down some. Cal Fire has told us that they sent two engines and that the fire began in an attached storage building.

UPDATE 2:50 p.m. — A reader on the scene has described the situation in a bit more detail for us. The motel is comprised for a few separate buildings in a U shape. It appears that the northeast building is on fire, and that that fire may have originated in an attached side building. The fire has spread through that building into rooms, but it was evacuated early in the fire. Other sections of the hotel have not been entirely evacuated, but are separate buildings. The have been strong gusts of winds, impeding the efforts of firefighters, but the wind has died down some. And the fire continues to spread.

UPDATE 2:35 p.m. — We are now getting some photos from readers that show the fire has actually burned into the main building and is spreading through the building. One reader who lives nearby noted that it appears that substantial damage has been made to the roof.

The motel was evacuated early in the fire, and we have no yet heard of any additional injuries. Early on there was a report, as yet unconfirmed, of a case of smoke inhalation.

The fire has now been burning for over and hour and appears to be continuing.

UPDATE 2:15 p.m. — As the fire continues to burn, a substantial number of fire resources and personnel have been devoted to it, and a substantial amount of water as well. Requests appear to have been made to increase water pressure, and firefighers have communicated to both Ukiah and the Millview Water District, that they are using a large amount of water.

Some of our readers on the scene have also noted that the smoke is quite bad in the area, and photos should a thick black smoke coming off the buildings.

UPDATE 2:00 p.m. — The fire is still burning, giving off a black smoke, though firefighters are on the scene attacking it both on the ground and with ladder trucks from above.

Here is a post from the Mendocino County Sheriff’s Office with some pretty detailed photos of the building:

6/25/19 — A structure has caught fire at the Motel 6 on the north end of Ukiah, on State Street, and multiple fire agencies are responding. The fire seems to have started in an outbuilding or maintenance building, not in the main building, and as of 1:20 p.m. it appeared that the fire was still burning, though it is unclear if was burning the main building.

The building was evacuated, though there are some indications that one person may have been treated for smoke inhalation.

The hotel is often referred to as “the old Discovery Inn,” and only became a Motel 6 in recent years. It also appears that the roads are still open, but that traffic has been affected.