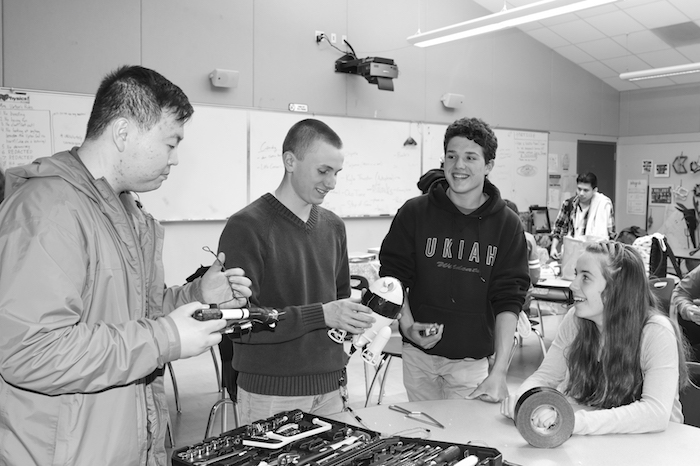 Members of the UHS Torque Team, photo from Ukiah Unified

UKIAH, 4/15/20 — The students at the Ukiah High School (UHS) STEM club have been selected to represent Northern California in a national underwater robotics competition for the third year in a row — but they need to raise $10,000 to get to the competition. The “SeaPerch” competition takes place in early June at the University of Maryland, and two teams of UHS students will bring remotely operated underwater robots to see if they can beat their previous standing in last year’s top 15 teams.

The students have been putting in long hours building robots after school and on the weekends, and they need donations from the community to cover the costs of cross-country travel and lodging to make it to the event. If you’re interested in donating, contact STEM club advisor Chatnaree Upton at [email protected].

Here’s all the details about the teams and the competition:

Ukiah, CA – For the third year in a row, Ukiah High School will represent all of Northern California at the national SeaPerch Challenge, being held this year at the University of Maryland on June 1 and 2. Ten UHS students are currently trying to raise the $10,000 required to pay for travel and lodging so they can see whether they can beat their top-15 finish from last year.
The two UHS teams, named Torque Team and H2Bros, must each complete the three SeaPerch Challenge events: the engineering journal, the obstacle course, and the challenge course. The journal chronicles the creation of the remotely operated vehicles (ROVs) each team created and the engineering that went into their designs. The obstacle course requires the ROVs to be maneuvered underwater through 18-inch rings as quickly as possible. The challenge course is the most difficult event, also worth the most points. The ROVs must open an underwater vault by pressing a lever, pick up weighted wiffle balls and place them in small cups, move large, somewhat buoyant masses to a specific location, and activate a sensor using a magnet.
To compete at this level, the students must embrace problem solving, teamwork, and perseverance. They use their knowledge of physics and engineering to design the ROV, and then use a 3-D printer to create the structure. They waterproof and affix motors, add just the right amount of buoyancy, attach propellers, and solder the circuit board of the controller so they can control the motors during the competition.
Torque Team member Sean Coursey explained, “The ROV has to be hydrodynamic and maneuverable with how the center of mass relates to the force of the motors and must remain stable when the center of mass is changed by picking up an object with a hook.”
Torque Team has created six ROVs so far and H2Bros has created four, each new one improving on the last. Coursey explained, “We had RTTB, which sank because of a buoyancy problem. Then we had Riceroni, which we made in about 30 minutes (which is how long we thought it took to make Riceroni). Then there was Inspector Clouseau, which had a wiring problem and DropTop, which had too much rotation because the propellers were rotating the same way. Then we created Bumble Bee, which we named because Mrs. Upton said it looked like a bumblebee carrying an elephant. Our most recent ROV is called Fat Boy, which is bigger than we originally planned but it works pretty well. Our final ROV will be a smaller version of Fat Boy, possibly with a hook rather than a straight wire out front. Maybe we’ll call it Captain Hook.”
H2Bros team member Daniel Au said he enjoys using CAD software to design the ROV and his teammate Marciela Rodrigues said she learned more about aviation than she expected, because she and the team had to figure out how to overcome problems with rolling and tilting. H2Bros team members are currently working on their ROV named Buoyant Billy. They say the next iteration will be named Buoyant Bill “because he will be more mature than the last.”
These students have spent every day after school as well as some weekend time for the past several months to work on their ROVs and they are excited to compete at nationals. Torque Team members include Sean Coursey, Dion Deng, Anna Fetherston, Mojo Holstine, and Daniel Lieben. H2Bros members include Daniel Au, Azaliah Garami, Estrella Munoz, Sofia Parsons and Marciela Rodrigues.
If you would like to donate to help these hardworking students compete at Nationals, please contact teacher and STEM advisor Chatnaree Upton at [email protected].