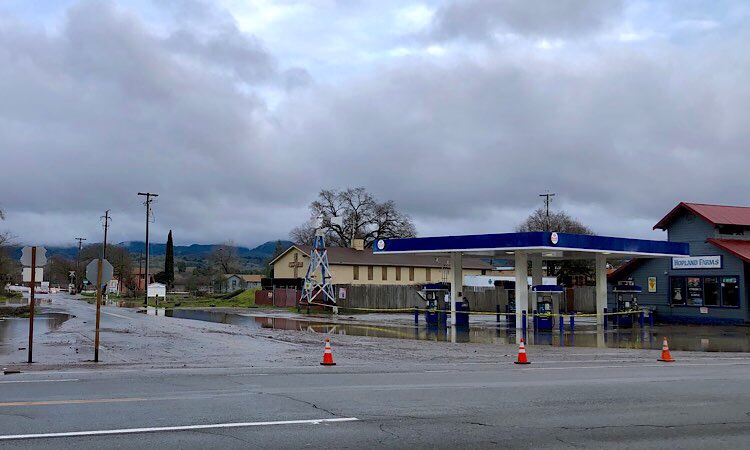 MENDOCINO Co., 2/27/19 — Much of the floodwater has receded across Mendocino County, and the Mendocino County’s Sheriff’s Office has lifted the evacuation warnings issued on Tuesday for low-lying areas near the Russian River in Ukiah and Hopland and for the Navarro the mouth. A number of roads have also re-opened, including State Route 222 (or Talmage Rd.) east of Ukiah, and Perkins St. east of the 101, but others remain closed, including SR-175 at U.S Route 101 in Hopland, SR-1 is closed at the Garcia River, and SR-20 east of the entrance to Potter Valley near the Mendocino-Lake county line.

The heavy rains have moved past Mendocino County, and many of the roads that were affected by pooling water, fallen trees, or mudslides have now cleared, but a National Weather Service flood warning (distinct from an evacuation waring) remains in effect for most of the county through Thursday morning. More rain may be on the way this evening, and a number of smaller roads and streams remain flooded. SR-175 near Hopland is still closed as of 5:45 p.m. Wednesday, and many of the vineyards surrounding the intersection of Highway 101 and SR 175 remain covered in water. SR-20 east is also closed east of Potter Valley, SR-1 is closed at the Garcia, and SR-211 is closed from flooding of the Eel River near Fernbridge.