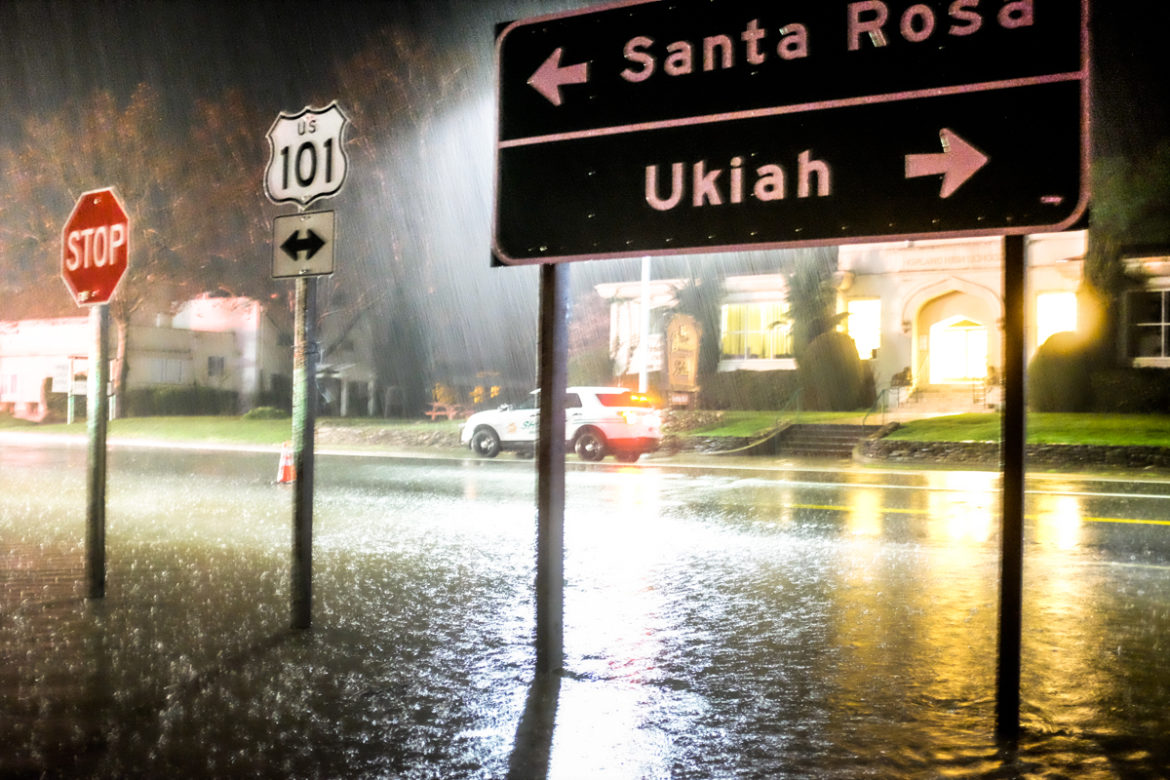 UPDATE 2/27/19 8:30 a.m. — Road continue to be closed across the county, including 175, 128, 1, and 222 (Talmage Rd.), although Perkins Street in Ukiah has re-opened. Highway 101 in Hopland may be one-way controlled traffic depending on flooding in the road, and cars may be routed along the center divide. You can scroll down for details on the specifics of these closures from Tuesday evening.

In addition, there are a number of roads where slides are occurring or trees have fallen, including SR 175 near Sanel Valley Road, Fish Road Road in the Anderson Valley, Caspar Orchard Road near Caspar, Highway 20 just passed the KOA west of Willits, Highway 1 just south of Elk, and more. Drivers have also reported significant flooding in the roadway on Highway 101 near Oil Well Hill north of Willits.

You can check the CHP incident page for the most current information about these incidents and the Caltrans Quickmap for road closures, but take caution on the road this morning, as road crews and emergency responders are working in a number of areas.

Water levels for the Navarro, the Russian, and the Eel may continue to rise, so be prepared for changing conditions over the next couple hours.

UPDATE 3:40 a.m. — Here is a slideshow and some videos that we’ve put together of tonight’s flooding.

A map of the evacuation warning area from the MCSO.

Note: We’ve been on a break, and aren’t back up to full power yet, but we said we’d be back for a big breaking news event — and this is important information which we wanted to help disseminate, so we’re back to reporting for tonight. We’ll be returning in full from our break soon, but if you want to support free to read, sustainable, locally-owned journalism available as the news happens, become a member at this link.

Update 11:50 p.m. — Highway 101 at State Route 175 in Hopland remains open, but the National Weather Service warns that the Russian River is expected to reach “flood stage” at 21 feet within the next few hours; NWS is also predicting the Eel River at Fernbridge to reach flood stage as well as the Navarro. Here’s the predictions as of 10 p.m.:

Latest river guidance from @NWSCNRFC Major impacts are being reported around Hopland due to Russian river flooding which is expected to peak in a few hours. Eel River near Fernbridge has also hit flood stage and will peak near 24 feet Wed. afternoon #CAwx pic.twitter.com/bYAcjCWauR— NWS Eureka (@NWSEureka) February 27, 2019

Flooding is also being reported between East Commercial Street and Hearst Road in Willits, according to the CHP incident log.

Update 11:10 p.m. — The California Highway Patrol incident page is currently reporting a landslide blocking both lanes on Feliz Creek Road, half a mile from the intersection of Highway 101 in Hopland. There is also a small slide reported on Highway 20 west of Willits, near mile marker 20 in the westbound lane, and a tree near the same location on Highway 20 blocking the eastbound lane. There is also a slide blocking the roadway on Mountain View Road around mile marker 18.

Update 10:35 p.m. — The California Highway Patrol and Caltrans are currently diverting traffic in Hopland on Highway 101 near State Route 175 through the center divide, and may decide to close Highway 101 if the flooding on the roadway increases. Dispatchers at CHP’s Ukiah office said that officers are on the scene to direct traffic and assess whether the highway will need to be closed later this evening if floodwaters begin to encroach on the center divide.

Currently Talmage Road is closed from Ruddick Cunningham Rd. on the east side to Hasting Street on the west. Here’s a video from the scene at Talmage around 10 pm:

Here’s a video of Doolan Creek in Ukiah, around 10 pm:

Update 9:45 p.m. — Mendocino County Office of Emergency Services has opened two shelters for flooding evacuees, one at the Veterans Memorial Building at 293 Seminary Avenue in Ukiah, and one at the Mendocino County Office of Education at 2240 Old River Road. According to Caltrans, Talmage Road in Ukiah, also known as State Highway 222, is closed due to flooding from mile marker 1 to mile marker 1.5, and there is no estimated time of re-opening.

There are a number of other roads impacted by slides or flooding across the county, according to the CHP incident log, and anyone driving should take caution as heavy rains are expected to continue past midnight, and then showers will resume on Wednesday. Roads impacted as of the time of publication include: SR 128, where there is a potential slide blocking the eastbound lanes near Lichen Estates; rocks and a small fallen tree east of Willits on Highway 20; another landslide and trees across the road on Gualala Road near the Old State Highway; a landslide in the southbound lane of Highway 1 south of Leggett; flooding on the bridge on Highway 162 in Covelo near Mendocino Pass Road; and a vehicle in a ditch near Branscomb Road and Lakeside Drive east of Laytonville.

In short, emergency responders and road crews are working overtime, but driving conditions are hazardous, so please be careful if you need to travel tonight. There are also a number of traffic collisions, slides, and flooding in Humboldt and Lake counties, so if you’re taking a longer trip, check the links below to get current information from CHP or Caltrans before heading out.

Ukiah Unified has also closed schools for tomorrow, and a number of events in the area are being rescheduled due to weather.

MENDOCINO Co., 2/26/19 — An evacuation warning has been issued by the Mendocino County Sheriff’s Office for portions of Ukiah and Hopland near the Russian River due to flooding expected this evening, including Oak Manor in Ukiah and areas near Highway 101 in Hopland. The river is expected to reach flooding stage somewhere between 7 p.m. tonight, Tuesday, and 1 a.m., but localized flooding could continue through Wednesday morning. Another evacuation warning has been issued for low-lying areas north of Elk, near Albion, along the Navarro River.*

An evacuation warning is not a mandatory evacuation order, but residents of these areas should be aware that conditions may change rapidly and be prepared to leave, and “seek a more secure location” if they anticipate flooding in their area. Two shelters will be open for residents who need to evacuate on Seminary Road and Talmage Road in Ukiah (details below). The MCSO has produced a cool map of the evacuation area you can see here. Flooding is anticipated at “Perkins Street, Oak Manor Drive, and Babcock Lane in the Ukiah area as well as State Highway 222 (Talmage Road) in Talmage, and Old River Road as well as Highway 175 in Hopland.” There is also a possibility of flooding on the Highway 101 in Hopland later this evening.

Currently portions of State Route 175 and 128 are closed due to flooding of the Russian and Navarro rivers that began on Monday evening, as well as SR 1 near the Garcia River — here’s a longer update from earlier today, including information about how to check for current road closures and where to find sandbags. Please do not attempt to drive through flooded areas — turn around instead. There have been a number of incidents where people have been forced to abandon their cars while attempting to drive across flooded roadways in the past 24 hours.

Here’s the full press release from MCSO about the evacuation warning, and below it the alert concerning flooding on the Navarro River:

STORM UPDATE
FOR IMMEDIATE RELEASE:
Incident Number: N/A
Crime/Incident: EVACUATION WARNING FOR RUSSIAN RIVER AREA
Location: UKIAH VALLEY and HOPLAND AREA
Date of Incident: 02/26/2019
Time: 5:50 PM
Victim(s): N/A
Suspect(s): N/A
Written By: Lieutenant Shannon Barney
Synopsis: As of 5:50 PM on 2/26/2019 the Mendocino County Sheriff has issued an evacuation warning due to flooding along the Russian River in the greater Ukiah Valley area as well as the Hopland area. The Mendocino County Sheriff’s Office and the Office of Emergency Services, along with the City of Ukiah, Hopland Fire, Ukiah Valley Fire, Cal Fire, Coastal Valley EMS, and the National Weather Service (NOAA) Eureka Office has been monitoring the current storm as it passes through Mendocino County. The storm is expected to deliver a significant amount of rain in the Russian River drainage by 1:00 AM on 2/27/2019. This rain, in addition, the rain already saturating the area, is expected to cause moderate flooding to the Ukiah area and Hopland. The river is expected to start flooding low lying areas as early as 7:00 PM and is anticipated to crest nearer to 1:00 AM. The flood waters are expected to recede by late morning on 2/27/2019.
This flooding is expected to flood low lying areas near Perkins Street, Oak Manor Drive, and Babcock Lane in the Ukiah area as well as State Highway 222 (Talmage Road) in Talmage, and Old River Road as well as Highway 175 in Hopland. There is a possibility that the water could rise high enough to cause a closure to Highway 101 in Hopland. The evacuation warning area can be viewed on the below-listed map link.
This evacuation warning is designed to inform the public and allow preparation time to gather important and necessary belongings well in advance of an evacuation order. The public is encouraged to seek a more secure location, prior to an evacuation order being given, if they feel their current location is at risk of flooding.
The above agencies have coordinated to provide public safety resources on the east side of the Russian River should that area become isolated due to flooding. Evacuation Shelters are going to be opened at 8:00 PM for people displaced by flooding. There will be a shelter opened at the Veterans Memorial Building at 293 Seminary Avenue in Ukiah, and another at the Mendocino County Office of Education in Talmage at 2240 Old River Road.
There is also an evacuation warning for residents on Navarro River Road, in Elk, due to flooding along the Navarro River. The flooding along the Navarro River is expected to recede by early afternoon on 2/27/2019.
The Sheriff’s Office would like to remind the public not to drive across roads that are covered with water as the roadway can be undermined by flood waters and the damage might not be visible to motorists.
https://drive.google.com/open…

Here’s the alert about the Navarro:

The Mendocino County Sheriff’s Office is issuing an Evacuation Warning for residences along Navarro River Road near the Navarro River. Current National Weather Service forecast show the Navarro River to peaking at 35.4 feet at 1 AM on Wednesday (2/27). The National Weather Service states that at 34 feet, “Significant flooding over the south bank approximately 1 mile east of Highway 1 will occur. Property damage to inlcude the six homes along the river is possible. Expect closure of Highway 128. Motorists should use alternate routes.”
Instructions:
Residents of Navarro River Road are urged to evacuate the area and move to a higher elevation less flood prone area.