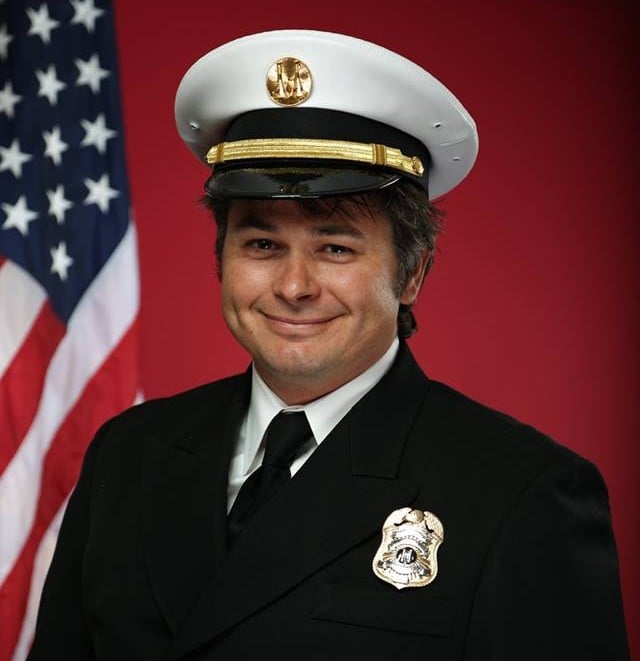 MENDOCINO Co., 8/15/18 — A grateful Mendocino County saluted Draper City Battalion Chief Matthew Burchett today, with a solemn funeral procession. The body of Battalion Chief Burchett was escorted by an CalFire honor guard, from the Eversole Mortuary down State St. in Ukiah, which was lined by firefighters, law enforcement officers, and members of the public, bidding a respectful farewell to the man who left his home to fight fires in our state, and lost his life. Burchett’s body was flown from Sonoma County Airport to Salt Lake City, where the the plane bearing his body received a water salute passing under twin streams of water shot from fire engines.

You can view videos of the procession, take off, and landing in Salt Lake City below. (For more information on the fires continue to scroll below the videos).

But even in the midst of this tragedy the work of fighting the fire continues.

While the River Fire has been 100% contained for several days, the Ranch Fire continues to burn north, deeper into the Mendocino National Forest. The Ranch Fire has grown about 10,000 acres in the last 24 hours, reaching 315,225 acres with 67% containment. This makes the Ranch Fire along 35,000 acres larger than last year’s Thomas Fire, which was previously considered the largest wildfire in recorded California history — and it may be some time before the fire stops burning in the National Forest. Combined the fires have consumed 364,145 acres and destroyed 147 residences and 118 other buildings.

In Lake and Mendocino counties evacuations remain in places in the area of the fire actively burning above Potter Valley and into the Lake Pillsbury area. On the far eastern side of the fire evacuations remain in place for sections of Glenn and Colusa counties (details in the fact-sheet). The fact that the fire which began along Hwy. 20 in Mendocino County has now spread so far, that it continues to force evacuations in four counties speaks to its tremendous scope.

Firefighters have had success in tying in lines, and conducting intentional burns, from Mid Mountain Rd. above Potter Valley, north to the Eel River, and turning those fire lines black.

The southern edge of the fire, from Potter Valley in the east, along Hwy. 20, through the communities along the north shore of Clear Lake, and all the way to Lodoga in Colusa Co. has effectively been contained, and the fire is only burning and growing along its north flank in the National Forest. There it continues to threaten structures and communities in the vicinity of Lake Pillsbury, and firefighters spent the day working on structure protection. The strategy for the next several days is to conduct a series of firing operations on the southern side of road M8, across from Blue Slides, in order to better contain the fire in the Lake Pillsbury area. Firing operations in the Mid-Mountain area of Potter Valley are nearing completion, but crews are continuing to control for hot spots prior to determining the area is safe for residents to return.

The middle section of northern part of the fire is still largely open fire line, but crews are beginning to have success in building indirect dozer line to the north, and hope to have the eastern and western sections of dozer line connected in the next couple days — about 32 miles of line. Still, according to a spokesperson for the US Forest Service, within the National Forest the fire is only 1% contained, and the difficult weather as well as steep terrain continue to pose a problem to firefighters. 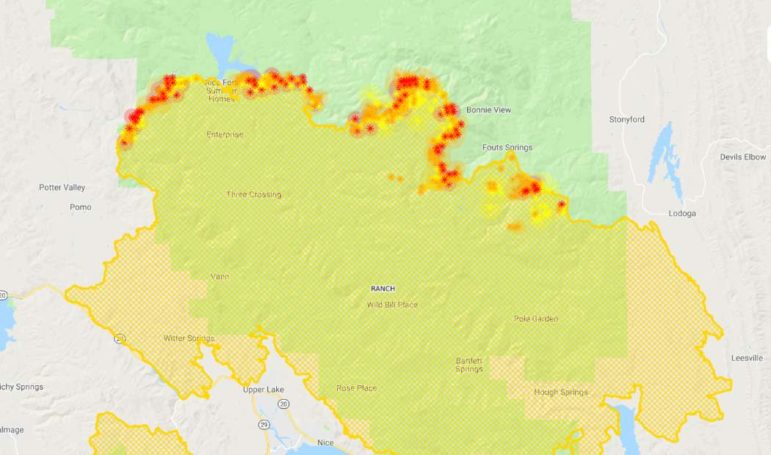