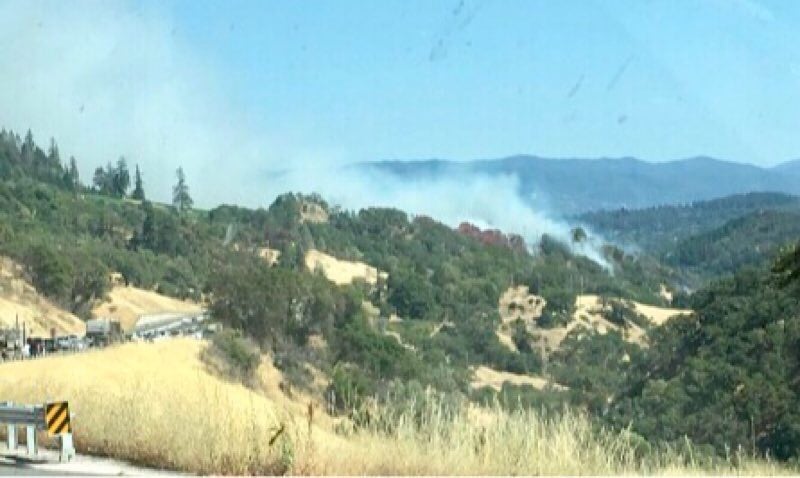 UPDATE, 8:50 p.m. — CalFire has issued an incident update with details on the Heart Fire, which burned on Hwy. 101 today, near bottom of the Ridgewood Grade. The fire stands at 65 acres with 50% containment, though forward progress has long since been stopped, and firefighters are mostly in mop up. The cause of the fire is under investigation.

Traffic appears to be flowing much more quickly with only modest delays.

UPDATE, 7:10 p.m. — The Heart Fire has been controlled but traffic delays continue, as fire crews remain on the scene to fully put out the fire. Expect the presence of crews for several hours, and attendant traffic.

UPDATE, 6:20 p.m. — As of about 6:00 p.m. the traffic is still backed-up on U.S. Route 101 where the Heart Fire burned. For a time the CHP was alternating northbound and southbound flow, diverting northbound traffic into a southbound lane to allow them to move past the fire without interfering with firefighters. This was creating a big back up and slow traffic. One reader described driving from West Rd. to the Willits bypass in one hour.

Firefighters remain on the scene, mopping up and increasing official containment of the fire, but forward progress has been stopped at between 50 and 75 acres. The fire burned much of the vegetation along the eastern side of the 101, and apparently up to where the old railway tracks lie. (You can see a video if you scroll down.)

UPDATE, 5:30 p.m. — Forward progress of the Heart Incident fire has been stopped, the fire is increasingly under control. Resources, including air tankers, are being sent back to base, though the air tankers remain loaded and ready to return to the fire. An aggressive response with lots of air support stopped forward progress of the fire quickly, and no structures were damaged.

According to the Twitter page of CalFire Mendocino Unit Chief George Gonzalez the fire is between 50 and 75 acres, though still technically only 10% contained.

Here is a video of the fire taken by a reader:

UPDATE, 4:40 p.m. — In a good sign, CalFire is beginning to cancel requests for additional resources, including dozers and water tenders — a good indication that they are getting the fire under control.

CHP appears to be letting traffic through intermittently but utilizing the southbound lane, but the traffic situation remains unclear. It is clear that there is slowed traffic and a large back up.

UPDATE, 4:25 p.m. — Firefighters continue to throw everything they’ve got at the Heart Fire along Hwy. 101. Retardant dumps are being made near the freeway. Hwy. 101 is intermittently open at this point, with CHP letting some people through at different points in the last hour. But the stoppage has create a long back up in both directions, and it is wise to avoid the area until the fire is out.

The fire has grown to about 40 acres but firefighters have made good progress, and the rate of growth has slowed down substantially.

Firefighters have had some power-lines in the area de-energized, meaning there may be power outages in the area.

MENDOCINO Co., 7/21/18 — A wildfire has broken out near the bottom of the Ridgewood Grade, at about Reeves Canyon Rd. and Hwy. 101. The fire has grown to around 25 acres, and was initially burning on the highway, causing the California Highway Patrol to stop traffic. According to the CHP traffic is now flowing intermittently.

The fire is being called the Heart Incident.

Firefighters are making good progress on the fire, with a major aircraft commitment including tankers and copters.

We will be updating as more info comes in.