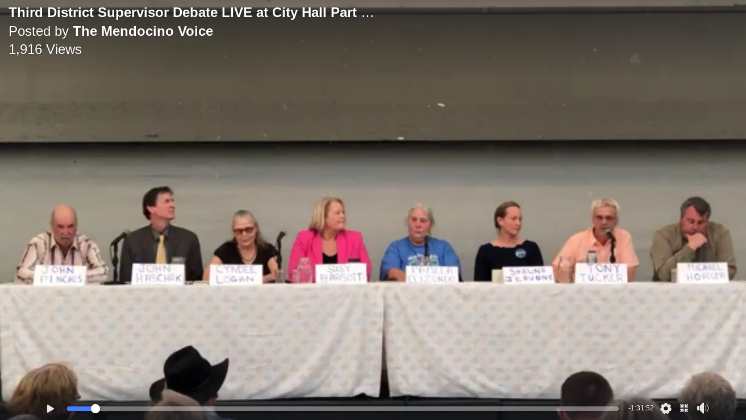 MENDOCINO Co., 4/22/18 — The eight candidates (yes, you read right, it’s 8) for the District 3 supervisorial seat were all present for a friendly debate at the Willits community center and city hall on Thursday. And The Mendocino Voice was there livestreaming the debate on Facebook, as we try to do with many events, and we’re providing the videos here, for anyone who missed the livestream. (Scroll down for the videos)

The candidates are, in the order in which they’re seated: John Pinches of the Island Mountain area,  John Haschak of Willits, Cyndee Logan of Willits, Susy Barsotti of Laytonville, Pamela Elizondo of Laytonville, Shawna Jeavons of Willits, Tony Tucker of Covelo, and Michael Horger of Willits. And here’s a complete list of everyone who is running for something in the county.

You can check out other upcoming debates and check out all of our election coverage here, including video of past events

But before we go much further with a rundown of the debate, we want to try something. In general we’re trying to be a smart, leaner, news organization, and that means providing our readers with what they actually want, not just what’s traditional or standard. So let us ask you a question: Do you prefer to see a whole video of a debate? or would you actually prefer to read an 800 word recap of said debate? If you have an opinion, please comment in the comments section, on Facebook, or write us an email at [email protected].

Due to the unusually large size of the field of candidates, moderator Rachel Britton, deployed an innovative questioning method. She began by asking one question they all get to ask, but later asked only two candidates a question, asking a total of four questions in a round, and then allowing the candidates a change to respond to a question they had not been asked.

In general the candidates showed remarkable consensus on issues of importance to Mendocino County, including economic development, the use of the old Howard Hospital for a mental health facility, fire preparedness, and cannabis. But their personalities and styles differed substantially.

You can check out other upcoming debates and check out all of our election coverage here, including video of past events.

The camera quality is substantially better in part II, and part I is only 13 minutes long (we had a technical issue with Facebook and had to switch) while part II is 90 minutes long.