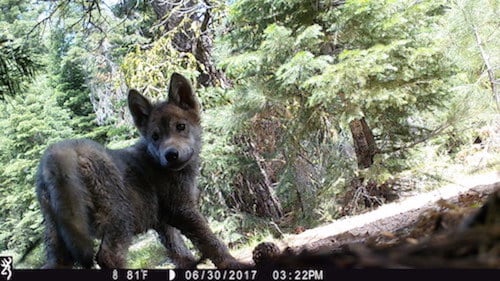 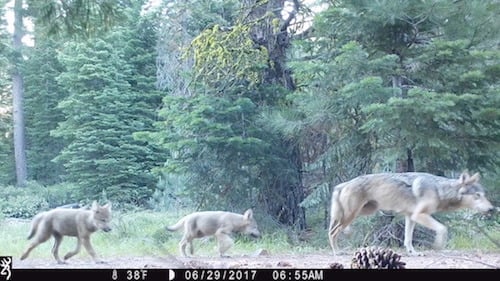 MENDOCINO CO., 7/06/17 — A grey wolf pack has been confirmed to be living in Lassen County, after California Department of Fish and Wildlife biologists collared the 75 pound adult female and discovered her pups. After spotting a pair of adult wolves on trail cameras during the fall of 2016, CDFW officials collared the female this spring and followed her trail, leading them to determine that she and her mate — who is genetically related to the Oregon Rogue wolf pack — have had at least three pups this spring. 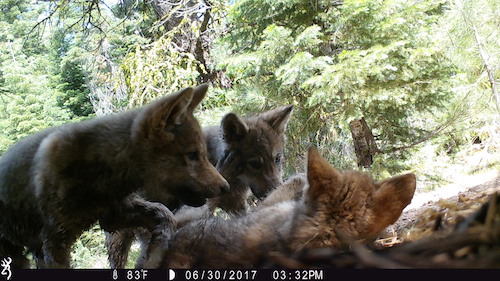 This pack, now called the Lassen Pack, is the second wolf pack found in California since they were extirpated from the state during the 1920s. According to a CDFW statement, the first new California pack, known as the Shasta Pack, was first discovered in 2015 but later went missing, although one pup may have been spotted in Nevada. Grey wolves are currently listed as endangered on both the state and federal levels. There is a CDFW management plan you can read here, along with more information about grey wolves, such as how to tell them apart from coyotes. 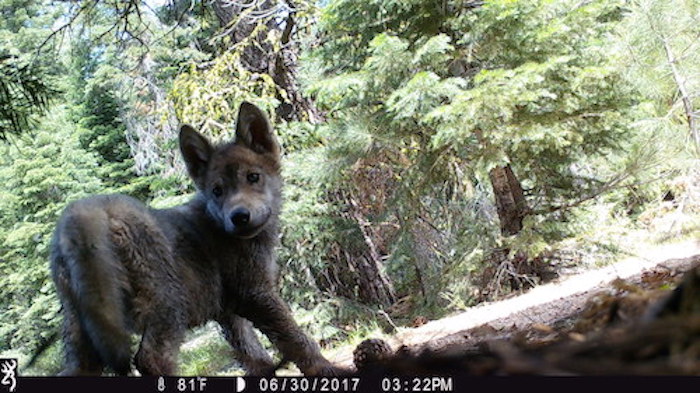 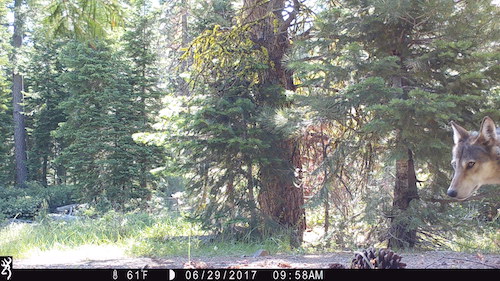 According to CDFW, the wolf pack has been seen in both Lassen and Plumas counties. In a statement, CDFW explains that “The tracking collar affixed to the Lassen Pack female will collect data relative to her activity patterns, survival, reproduction and prey preferences. The Lassen Pack regularly traverses both public and private lands, including industrial timberlands, and the collar may also help to minimize wolf-livestock conflicts by providing information about the pack’s location relative to livestock and ranch lands.”

The following is the full press release from the California Department of Fish and Wildlife.

California Department of Fish and Wildlife (CDFW) biologists have captured and fitted a tracking collar to a female gray wolf in Lassen County, and confirmed that the wolf and her mate have produced at least three pups this year.

During summer and fall 2016, remote trail cameras captured images of two wolves traveling together in Lassen County. There was no evidence they had produced pups at that time. While the female’s origins remain unknown, genetic samples obtained from scat indicated the male wolf originated from Oregon’s Rogue Pack. The famous wolf OR7 is the Rogue Pack’s breeding male.

In early May 2017, partner biologists from the U.S. Forest Service (USFS) found evidence of recent wolf presence in the Lassen National Forest. CDFW biologists began surveying the area and planning a capture operation to collar one of the animals. On June 30, after 12 days of trapping attempts, the 75-pound adult female gray wolf was captured. After a thorough exam by the biologists and a wildlife veterinarian – including the collection of genetic and other biological samples – the wolf was collared and released.

“The anesthesia and collaring process went smoothly and the wolf was in excellent condition,” said CDFW’s Senior Wildlife Veterinarian Dr. Deana Clifford. “Furthermore, our physical examination indicated that she had given birth to pups this spring.”

The following day, July 1, CDFW biologists returned to the field for a routine follow-up check on the female. They encountered tracks of what appeared to be wolf pups, and then found that a nearby trail camera operated by USFS had captured photos of the female with three pups. The pups were gray in color and were serendipitously photographed playing in front of the camera.

These wolves, named the Lassen Pack by the USFS employee who first detected their location, are the second pack of gray wolves known in California since their extirpation in the 1920s. The first confirmed breeding pair in California produced five pups in eastern Siskiyou County in 2015, and are known as the Shasta Pack. The current status of the Shasta Pack is unknown, although one of the 2015 pups was detected in northwestern Nevada in November 2016.

The tracking collar affixed to the Lassen Pack female will collect data relative to her activity patterns, survival, reproduction and prey preferences. The Lassen Pack regularly traverses both public and private lands, including industrial timberlands, and the collar may also help to minimize wolf-livestock conflicts by providing information about the pack’s location relative to livestock and ranch lands. While most of the pack’s known activity to date has been in western Lassen County, some tracks have also been confirmed in Plumas County.

The Conservation Plan, a wolf sighting report form, a guide to help distinguish a gray wolf from a coyote and additional information about wolves in California can be found at www.wildlife.ca.gov/Conservation/Mammals/Gray-Wolf.

4 thoughts on “Wolf pack with pups found in Lassen County; one wolf collared by Fish & Wildlife”