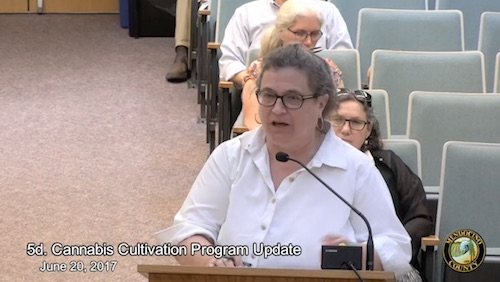 Interim Ag Commissioner Diane Curry gives an update to the supervisors on June 20. 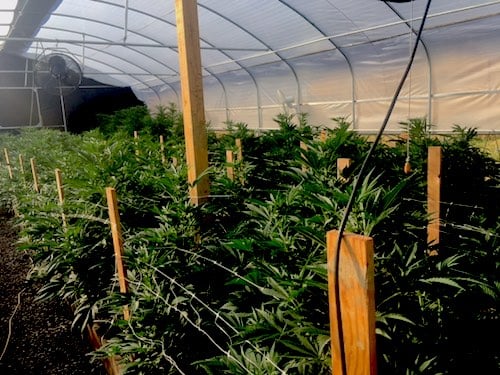 MENDOCINO CO., 7/06/17 — In mid June, Mendocino County issued its first medical cannabis cultivation permit, beginning a process of permitting cannabis farmers who can apply until the end of December, 2017. From May 4 through June 20, 441 applications were submitted under the county’s new medical cannabis cultivation ordinance, a substantial number for the Mendocino County Agriculture Department to process, but, as Supervisor Dan Hamburg noted, “Maybe we’re getting close to 10% [of the county’s cannabis farms]…even keeping track of this many is amazing.” Hamburg was then warned by county counsel not to continue speaking, as he is required to recuse himself from any discussion of cannabis regulations.

Interim Mendocino County Agriculture Commissioner Diane Curry announced the first permit as part of a June 20 update to the Board of Supervisors, given by Curry and interim Code Enforcement Manager Trent Taylor about the county’s new cultivation permit program. Members of the public voiced concerns during that meeting, warning that high fees, onerous building codes, business structure requirements, and strict enforcement could deter more cultivators from applying for permits. Many also expressed frustration with ambiguities in the permitting process. At one point the supervisors said they would consider amendments to the ordinance in the next few months, and that they wanted flexibility to encourage growers to come into compliance. 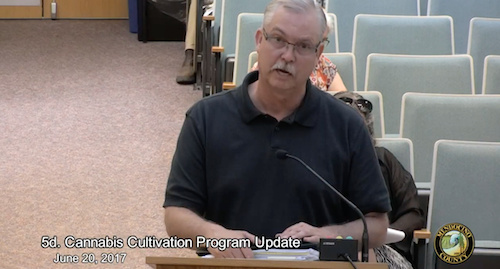 Farms are being permitted, Curry said, but many applications submitted are still incomplete. The county ag department staff are working closely with Mendocino’s Department of Planning and Building, as well as the air quality and environmental health departments, to coordinate work. According to Curry, at least two of the applications submitted so far may be denied, due to “egregious” environmental violations found during inspections by California Fish & Wildlife. Most of the complaints coming in are not about the cultivators who have applied for permits, said Taylor. He added that most farmers had been willing to correct any problems that were discovered by county staff.

Some supervisors expressed concerns about a “green rush” on Mendocino real estate by people unfamiliar with the county’s regulations — particularly the “proof of prior cultivation” requirements — and said they had received complaints about unpermitted cultivation and grading. Curry stated that she had reached out to local realtors to inform them of the ordinance’s requirements, and pointed out that violations of the ordinance can bring large fines and require costly remediation. Supervisor John McCowen noted that certain criminal charges may apply as well. Referencing the slogan “think before you dig,” McCowen added that prospective cultivators should “think before you purchase,” and that in cases of environmental damage, it is “harder to put it back together than it is to take it apart.”

The county’s code enforcement unit has expanded from three code enforcement officers to seven, with two specifically dedicated to cannabis enforcement. The increase in staff was helpful in handling the volume of complaints about cannabis cultivation this season, Taylor said, which totalled around 130 calls as of June 20. Only a few dozen complaints were about permit program enrollees, while the rest were about cannabis growers who have not applied for permits. Code enforcement officers are trying to work with cannabis farmers and bring them into compliance, before pursuing notices of violations or administrative citations, he explained, adding the county has not yet issued any administrative citations. Most growers have been willing to correct issues or “self-abate,” a trend he expects to continue.

As for the violations found so far, Taylor said some criminal charges were being considered for unpermitted growers found violating environmental laws. He warned supervisors that many applicants are unaware of the numerous different regulations for cannabis overseen by the different departments and state agencies, such as grading requirements, and water rights permits. Taylor warned that if other agencies, such as the water board, experience delays issuing permits, the county may face enforcement challenges.

Interim Ag Commissioner Diane Curry gives an update to the supervisors on June 20.

Curry added that the ag department plans to post a list of frequently asked cannabis questions to the county’s website and staff are conducting ongoing outreach. One farmer, speaking during public comment, compared the numerous regulations to “drinking through a fire hose,” and requested some flexibility from county inspectors since this is the first growing season the ordinance is in place.

Some members of the public are concerned about what types of greenhouses or “hoophouses” require permits under the new ordinance, and what structures need to be compliant with the federal Americans with Disabilities Act (ADA) — regulations which might impact small farmers who don’t grow cannabis. Farmers are also worried about permit requirements for cannabis drying and processing sheds. At the June 6 supervisors meeting, several Mendocino farmers shared their fears that the new permits are costly and difficult to implement, especially since many existing farm buildings have been in use for decades. Vegetable farmers, who also using hoophouses,  were especially concerned about how such ADA regulations might impact their produce farms.

The county and the ordinance require permits for structures of a certain size and permanence, and the county has extended the deadline for a permit amnesty for Planning and Building permits until December 31, 2017.  At the June 20 meeting, some farmers told the supervisors they thought they had more time to comply with ADA regulations, but that instructions from staff had been inconsistent. Several commenters asked for extra time, saying many farmers are mid-growing season, or making repairs after spring storms.

Some supervisors argued for flexibility, in order to encourage cultivators to enroll. McCowen suggested that in a couple months, supervisors could create additional permit types or amend permit requirements for hoophouses, greenhouses, and drying/processing structures. Supervisor Dan Gjerde noted that a revised Class K permit type might apply in some cases. Supervisor Carre Brown pointed out that much like hay barns and other farming structures, flexibility could be allowed in certain cases, but she added that the safety of any employees, or visiting members of the public, also needed to be considered.

Several members of the public pointed out potential problems with how best to fill out the many different forms required for county and state cultivation permits. Medical cannabis cultivation permits are non-transferable under the county’s new ordinance, and require a “proof of prior cultivation,” but the state cannabis permitting requirements are not yet finalized. Prior to 2016, cannabis businesses could not be registered as an LLC under state law, but business owners are now being advised to file that way, complicating their proof of prior cultivation. Several attorneys spoke to the supervisors about how  this may create inconsistencies for Mendocino cultivators as they fill out various business, tax, and permit forms for the county and state. Supervisors acknowledged this issue, but stated that cultivators must still be consistent in the name they use on their applications for cultivation permits, and when they are submitting tax and other business documents to the county.