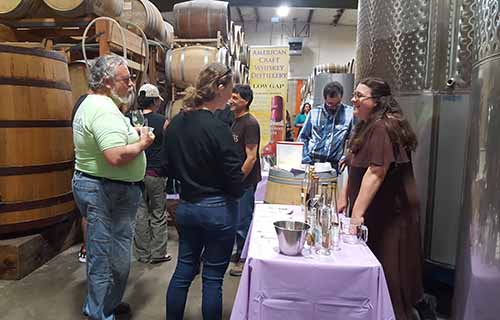 5/3/2017 — A Taste of Redwood Valley featured five wineries and a distillery this year, with a sold-out winemakers’ dinner on Friday, April 28 and a wine tasting the following day. The Mendo Voice followed the music up Bel Arbres Drive on Saturday to see what was going on. 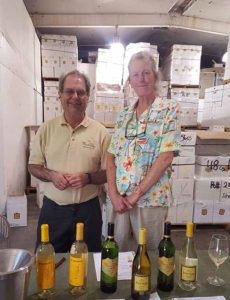 Mike Williams, the tasting room manager at Graziano Family of Wines on 1170 Bel Arbres Drive, reported that, though advance ticket sales were poor, his on-site sales of 14 glasses exceeded his expectations. The winemakers’ dinner, he noted, was sold out. In previous years, the Taste of Redwood Valley event has been held on Father’s Day weekend in June.

The Graziano selection included olive oil, three varieties of Pinot, and Coro Mendocino, a local Zinfandel appellation. Coro was launched in 2001 by Consortium Mendocino, a group of wine grape growers who, in Williams’ words, wanted “to elevate Mendocino in the face of Sonoma and Napa.” A large portion of Mendocino county grapes are sold to southern winemakers to make world-famous wine.

Coro can contain a mixture of grapes, but all of them must come from Mendocino County. The wines must be forty to seventy percent Zinfandel, pass two blind tastings, and spend one year in the barrel and another in the bottle before they receive the Coro cartouche, a pewter seal of authenticity. Graziano’s Coro is 64% Zin, with the remainder a mix of Barberra, Petite Sirah, Sangiovese, Dolcetto, and Montepulciano. 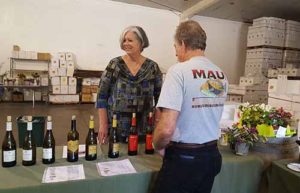 Barbara Reber talking wine at Graziano with a visitor.

Barbara Reber, who was pouring, enticed guests with a Pinot Meunier, a light red summertime wine with a mild cherry flavor. The Pinotage is a heavier Pinot mixed with Cinsault, a grape that is popular in Algeria for its high productivity and tolerance to drought. 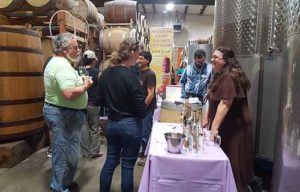 Down the road, at Germain-Robin, spirits and ice cream were on the menu. Wine Country Jazz, a Ukiah band, played in the shadow of the distillery as visitors chose among the flavored spirits. Crispin Cain of Greenway Distillery, which shares the facility with Germain-Robin, started making rose liqueur in 2007 and is currently working on a candy cap liqueur, which could be in production by the fall. In the meantime, an over-sugared trial batch of candy cap liqueur was turned into ice cream. Dylan Cain, on scooping duty, noted that “By the time you got drunk on this, you’d be in a diabetic coma.” The ice cream was easily accessible from what Tamar Kaye, of Greenway, called “the awkward table,” or the one with all the complex flavors. The Creme de Poete, she told an interested party, “is the everlasting gobstopper of liqueurs,” with its fruit, nuts, and hint of sandalwood. 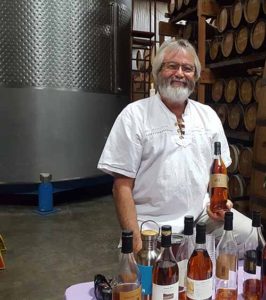 Joe Corley, director of production and distiller at Germain-Robin.

At the Germain-Robin table, where teenaged brandies jostled for space with venerable brews, distiller Joe Corley bantered with connoisseurs and the curious alike. The Old Havana alambic brandy, he explained, is made to enjoy with cigars. It seemed wasted on someone who has never even tried a cigar, but this reporter accepted a sample of a beverage that has been raved about by professional critics and luxury sommeliers. Germain-Robin, the story goes, keeps a barrel of brandy that is reserved for the White House. Mendocino, with its hot days and cool nights, is the ideal location for flavorful, yet acidic grapes, which are essential to high-quality brandy. “I’d rather make it in Havana,” Corley said, laughing — where a guy can get a good cigar.