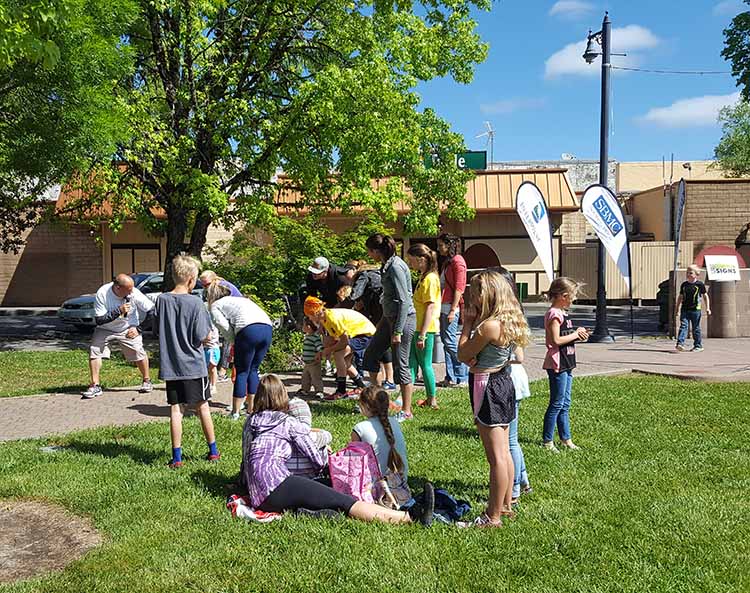 DJ Ryan Fabian and children about to start the fun run. 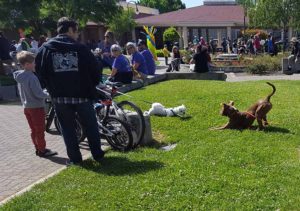 A few visitors to the Human Race.

UKIAH, 5/14/2017 — There were a lot of dogs at the twelfth annual Human Race on Saturday, May 6. The Human Race, inspired by a similar event in Sonoma County, is a fundraiser that takes place at Alex Thomas Plaza in Ukiah for various non-profits. Participants find sponsors, then walk or run five kilometers, or just over three miles, to raise money for the organization of their choice. North Coast Opportunities organizes the event and distributes 80% of the funds to the designated non-profits.

Nadine DeLapo, of NCO, has been involved in the event for all 12 years, though Tami Bartolomei, who is now the community services administrator for the City of Ukiah, started it. 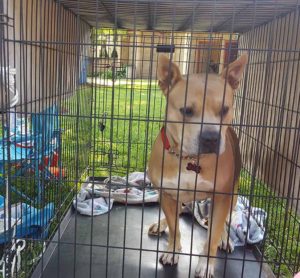 One of the organizations on hand was Mendo Shelter Pets Rescue, which dispatched volunteers to stroll around the plaza with dogs looking for homes. Tai, a young pitbull mix, stood in a cage and coaxed a crowd of half a dozen little girls to give him biscuits from a bowl that was being used as a paperweight on the table beside him. His colleagues walked around and gazed longingly at the hot dogs that runners and their supporters indulged in after the race.

Once the adult runners finished, DJ Ryan of Tah Dah Productions, who had been entertaining the crowd with classic rock tunes, encouraged groups of children to chase him around the plaza. “You guys are way faster than four-year-olds,” he told the second group, which included a few serious runners. 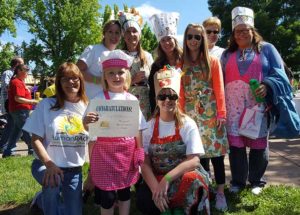 The Caring Kitchens team, which won first place in the costumes category.

The fastest adult male and female runners of the day were husband and wife Paul and Debbie Hupp, who finished the race at 20 minutes, three seconds, and 22 minutes, 16 seconds, respectively. The winners of the costume contest were the NCO Caring Kitchens team, which is organizing an effort to teach young people how to cook healthy meals for cancer patients.