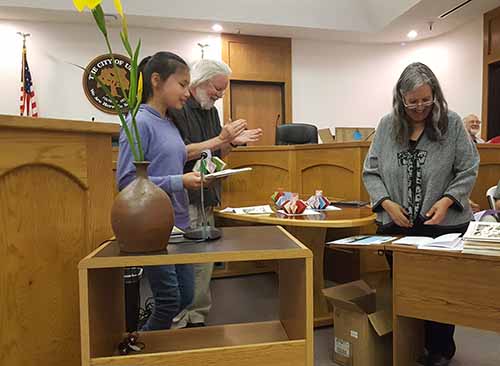 UKIAH, 5/3/2017 — The Ukiah Civic Center was packed to capacity on the afternoon of Sunday, April 30, for the fifteenth annual Ukiah Haiku festival, which had 1,840 entries this year. Over 500 of those entries came in from six continents for the international Jane Reichhold category. “Antarctica really needs to step up,” quipped Ukiah poet laureate Michael Riedell, who made the introductory remarks and read a few haiku.

Haiku is a Japanese form of short poetry that is supposed to convey a vivid yet simple images in three lines. The first and third lines are traditionally only five syllables long, while the middle line is supposed to contain seven syllables. This year’s contest was produced by the ukiaHaiku Committee, which consists of local literati, including current and former poet laureates, and representatives from the Grace Hudson Museum and the Ukiah branch of the Mendocino County library. 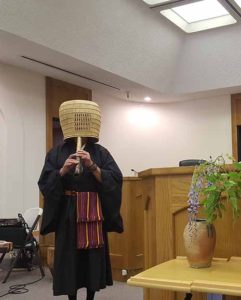 The priest of emptiness.

A masked man in black robes set the mood for the event, as attendees refreshed themselves with lemon water and bought booklets of the winning entries. A long Shakuhachi flute protruded from the bottom of his basket-like mask, its haunting strains wafting over the crowd. As haiku lovers settled into their seats, the musician, Ron Nadeau, removed the mask and explained that he was dressed as a Komuso, or “priest of emptiness,” in the tradition of the 13th century Fuke sect of Japanese Zen Buddhism. The basket is called a kasa, and it is supposed to signify the lack of ego — though, Nadeau noted, it was also historically useful for “monks” engaged in espionage. 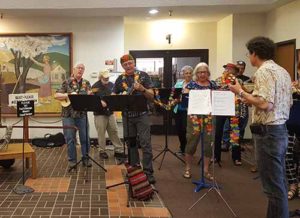 The Ukiah Ukelele Group plays after the reading.

The poems that followed the brief history lesson were equally complex in their deceptive simplicity, ranging from meditations on death to observations about the natural world. One even featured a cat, unsuccessfully attempting to hide its scat beneath an iris.

Riedell reflected that the three-line, 17-syllable haiku is like a black and white photograph to a Western audience that is used to getting “the whole story” in long novels or hours-long movies. Therefore, he advised the readers who filed up to the podium, “Luxuriate in your three lines.” In fact, he added, read it twice, “so we’ll luxuriate twice.” 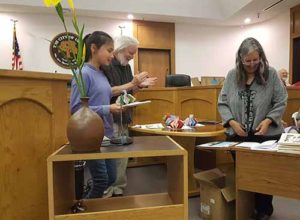 The majority of categories were for local schoolchildren, and several young poets won more than one award. Amelia Adams took two first-place prizes in the grades four through six division: one in the category for “haiku about Ukiah,” and another for the all topics category. First-place prizes were decorated with origami artist Yami Yamaguchi’s original design, “Fireworks,” which can be folded into three different three-dimensional images. Members of the UFO, or Ukiah Folding Organization, made the trophies for the winners. 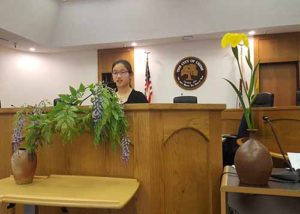 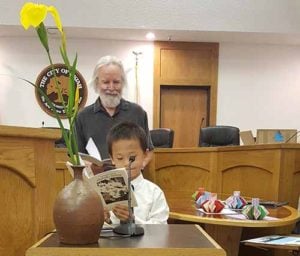 Yukedi Zou reads his haiku with local poet Dan Barth in the background.

The festival had its bittersweet notes, too. The winning haiku in the tenth to twelfth grade division, all topics category, was by a poet named Michael S., who is in the local juvenile detention center and wrote about listening to his mother’s voice and the wind in the trees from his cell.

The festival was also tinged with the loss of Jane Reichhold, a local haiku master who served as the judge for the international award. Reichhold was a translator and world traveler who spent years traveling back and forth between Mendocino County and Hamburg, Germany. Her judging duties this year were taken over by poet Michael Dylan Welch, of Redmond, Washington.

In his remarks, Riedell read a haiku Reichhold wrote about the end of life, which followed the day’s theme of encapsulating complicated topics with simplicity:

the sea in me

One thought on “Haiku festival: bittersweet but still lovely, the Voice enjoyed it”