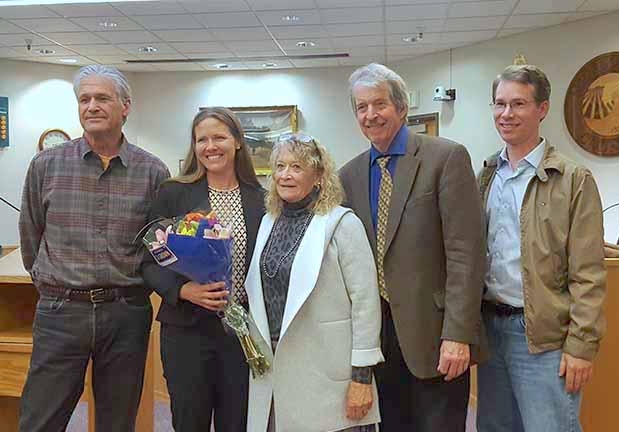 The, now full, Mendocino County Board of Supervisors. 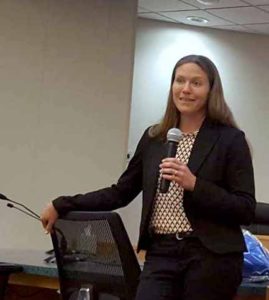 Croskey sharing a few words after being sworn in.

UKIAH, 5/11/2017 — Georgeanne Croskey, the new Third District Supervisor, was sworn in during a brief ceremony today, May 11, in the Mendocino County Board of Supervisors chambers. The event took place only two days after her appointment by Governor Jerry Brown was announced, though Croskey has said that she still needs time to transition to her new job and will likely not attend next week’s meeting. She was greeted warmly by her new colleagues with speeches. But when asked about a series of specific stances and plans she demurred, saying, “I don’t want to sit and make this all about issues right now.”

After CEO Carmel Angelo administered the oath of office, Second 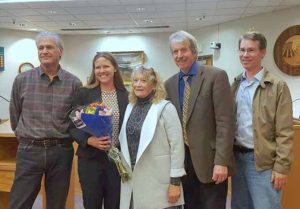 The, now full, Mendocino County Board of Supervisors.

District Supervisor John McCowen took the microphone to share a few words with his new colleague. “Welcome,” he began. “As everyone knows, the board of supervisors did unanimously endorse former Supervisor John Pinches. He would have been a great re-entry to the board.” He went on to say of Croskey that “Anyone who’s had a chance to glance at her resume or talk to her knows how well qualified she is,” citing her dedication and commitment. 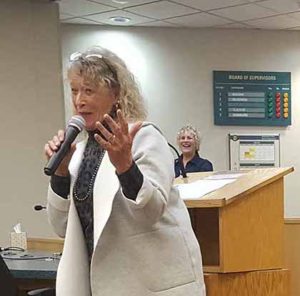 Supervisor Carre Brown is glad to have another woman on the board.

Fifth District Supervisor Dan Hamburg said he was particularly excited to have someone sitting to his left, adding that “Sometimes it’s hard to find anybody to my left in Mendocino County.” The room, which contained many of Croskey’s husband’s colleagues from the sheriff’s department, burst into laughter. Matthew Croskey is a detective in the MCSO.

Fourth District Supervisor Dan Gjerde welcomed Croskey, saying “There are definitely plenty of committees for you to serve on.” First District Supervisor Carre Brown also mentioned the work involved in the supervisor’s duties as she greeted Croskey and her three children. “Your mom’s taken on a big job,” she told them, and went on to point out, “what my colleagues couldn’t say, that I get to say: I got another woman on the board! It’s not just me and the guys!”

In a brief interview after the meeting, The Mendo Voice asked 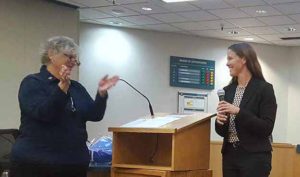 Croskey how she planned to respond to Sheriff Tom Allman’s recent challenge to the board to come up with a mental health initiative. “That is definitely an issue that is important to me,” she replied, saying she would like to see what the other supervisors have developed so far, so that she can work with them, the sheriff, and the people in her district. “I don’t have a plan in place yet,” she concluded.

Asked about the controversial issue of the Grist Creek asphalt plant, which is the subject of multiple lawsuits, Croskey said, “I’m not prepared to give a stance on that yet.” Brian Hurt, the owner of Grist Creek, filed a claim against the county in March, asking for $10,000 in damages for interference with the “exercise or enjoyment of his rights secured by the United States and California Constitutions,” according to the claim.

On other issues, such as cannabis production, transportation and emergency funding services she has also punted, citing her need to inform herself and talk with constituents.

In an interview on local radio station KZYX Croskey elaborated on her views on the ongoing issue of regulating cannabis, saying, “I don’t have a lot more to say, this is one of things that I need to delve into — where the policy is currently, where it’s heading, and also really need to hear from people in my district.” Adding, “…what parts people like, don’t like, where they’re struggling.”

On the topic of cannabis, she also emphasized safety and protecting the county’s “beautiful environment,” noting that people are coming at this from both sides of the “spectrum” and that no everyone would get everything they want.

As to her agenda for her term, she said, “I make an agenda based on what people want.” And in terms of the challenges she faces she cited her learning curve.

In her public comments, Croskey told the attendees that she was honored by the gubernatorial appointment to her new position. Because it happened so suddenly, she said “I haven’t had a chance to get my life quite turned around and ready to tackle this.” However, she assured the crowd that she had already set up several “meet and greets,” adding, “We’re gonna hit this hard and get started. I’m ready.”