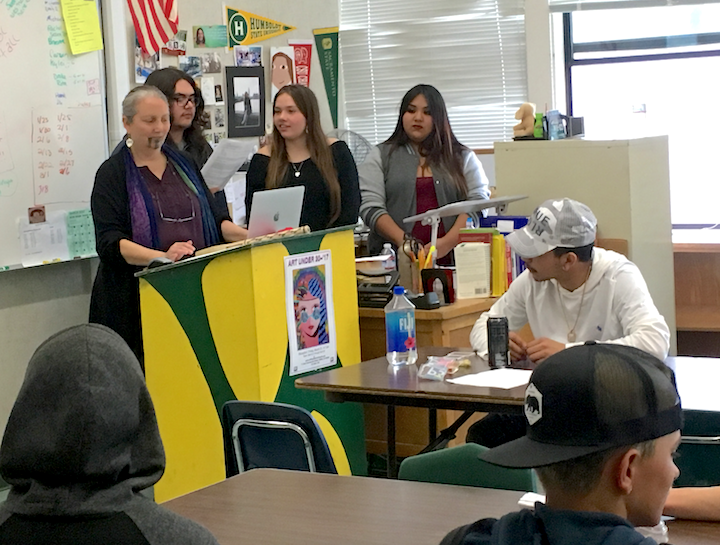 MENDOCINO CO., 4/11/17 — Growing up in Round Valley, Shayleena Britton heard a little bit about the Wailaki language from her grandmother’s sister, who wasn’t taught it as a child, but can still remember a few Wailaki words that were spoken to her as a child. When the first Wailaki classes began at Round Valley High School three years ago, Britton was excited to learn the language previously spoken by her family and tribe. Now a 17 year old senior and Wailaki Two student, Britton is teaching her relatives what she learns in class as part of a local effort to revive the language.

Now, thanks to a $10,000 American Indian Dreamstarter Student Award, Britton will go beyond sharing the language with classmates and relatives, to sharing this knowledge with a broader community, both in Round Valley and around the world. Britton recently received the grant, a national award given to only 10 students annually, to develop an online educational resource and community events to help bring the Wailaki language back to her community. “My grandmother is able to learn her language, and I wanted to be able to teach people in the community,” she said of the project.

The Dreamstarter grant program, part of the Running Strong for Indian Youth organization founded by American Indian Olympic runner Billy Mills, supports American Indian communities. Students and their teachers are eligible to receive funding for projects that meet immediate community needs, as well as those that “provide opportunities for self-sufficiency and self-esteem,” and help students realize their dreams.

The Wailaki classes at Round Valley High were established three years ago, part of local effort coordinated with research linguists around the state. Wailaki had been considered a dead language for over a generation when the classes began, with very few audio recordings or written records of Wailaki words stored in university archives, and no living native speakers.

The Round Valley teachers and students have teamed up with researchers to revive the language: RVHS students and their work with university researchers to determine how the language was spoken and clarify the meanings of words. People learning the language consider it a process of “reawakening” a language that was previously “sleeping.” These students are becoming some of the most fluent Wailaki speakers in the world. Classes count towards graduation, and now, after three years, the school has added Yuki classes as well, previously spoken by another Round Valley Indian tribe. Round Valley High is about 75% native american students.

The most important thing about receiving the Dreamstarter Award, said Britton, is that she will be able to share what’s she learned in class with the broader community. Her project includes building a Facebook page and an online resource for other people interested in learning Wailaki, where she can share vocabulary, audio and video recordings, and other educational resources.

The online resources — which include vocabulary videos from her classmates — will bring some of the only current recordings in Wailaki to the public, particularly important since the language is spelled very differently that it is spoken. “I wanted it to be easy and something everyone could get to,” she said of why she chose a Facebook page for the project, adding that she was inspired by websites and apps developed for Navajo and Hoopa speakers.

Britton is also planning a series of community events to connect with elders and others who may not have access to the internet, but want to learn more about the language they may have heard in their youth. She will use part of the project’s funding to print flyers and t-shirts with Wailaki vocabulary for the elders and kids in the community.

One of the most challenging aspects of the language classes, said Britton, is that since the students and teachers are working with researchers to determine vocabulary and the correct way to speak the language, word definitions can change over time. “Our rule in class is that ‘it is, until it isn’t,” she said, adding that the teachers are learning alongside the students. Britton explained that when she first started the classes, she spoke with her great aunt, who said her own grandparents used to call her and her sister “su-ka-lil-ii,” meaning “crazy.” Britton described how exciting it was to come across the same word several weeks later while studying vocabulary in Wailaki Two, so the students could confirm its meaning way correct.

This year three Round Valley High teachers also received funding for projects as part of the first class of Dreamstarter Teacher awards, which will go towards supporting American Indian projects in the classroom, and last year, one of school’s first Wailaki students, Blaze Burrows, received a Dreamstarter Award to revive Kyin-naal-del’, 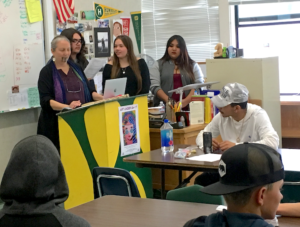 a traditional stick game, for the local students. At a recent Native American event at Willits High School, students from the classes presented their efforts to the school and sang a few songs to share the language and explain the learning process, as well as demonstrating Britton’s project and the traditional stick game locally revived by Burrows (videos below). Wailaki teacher Cheryl Tuttle explained to students that many of the words are also not direct translations. For example, for the word “learning,” students have discovered the best translation is “around it my heart travels.”

Though the Dreamstarter project is planned to last a year, Britton noted the online nature of the work will allow her to continue working on it even as she attends the Academy of Art for animation in San Francisco next year. “Since it’s online, I’ll be able to add to it even while I’m at college,” she said.

Britton also received the Student of the Year Award from the California Conference on American Indian Education this spring, which included a prize of $1,000, a plaque, Pendleton blanket, and necklace for her efforts. This month, she will travel to attend the Dreamstarter Academy, where she’ll present her project, meet American Indian Olympic runner Billy Mills, and connect with the other students who received the award. “I’m really excited, I know I will have a group of nine other students that can help me figure things out and support my project,” she said of the academy.

Check out Britton’s Wailaki Facebook page to learn more about the project. You can watch a video of Britton and Tuttle talking about the Wailaki classes and the Dreamstarter Awards at Willits High School, and one about Burrow’s Dreamstarter project below.

Britton and Tuttle talk about the classes and Dreamstarter awards to a group of Willits High School students on March 20:

Tuttle talks more about the Wailaki classes, and she and the students sing a song in Wailaki:

A video from the Dreamstarter Awards about Blaze Burrow’s project: