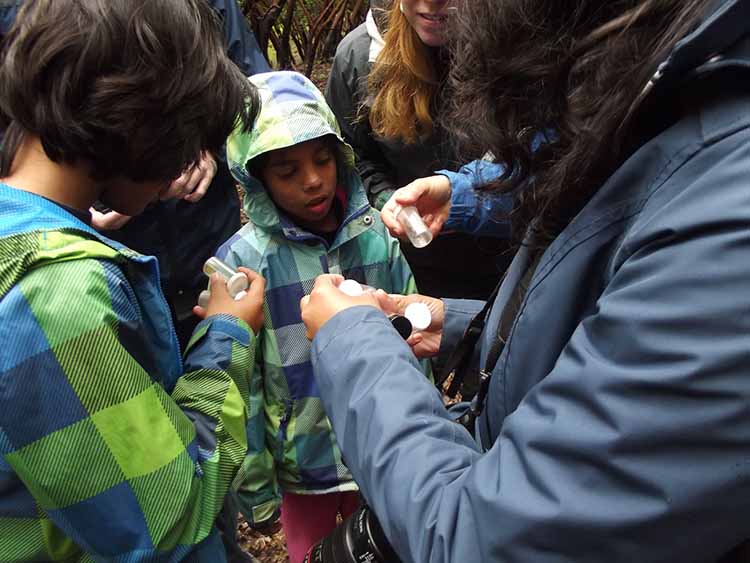 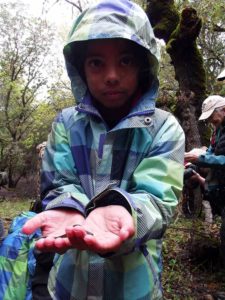 Parnavi Jain with a salamander.

HOPLAND, 4/9/2017 — Two of Northern California’s premier arachnologists were at the bioblitz in Hopland on Saturday morning, peering under logs and poking through leaf litter in search of spiders and scorpions.

Lauren Esposito, the Schlinger Chair of Arachnology at the California Academy of Sciences in Golden Gate Park, and Sarah Crews, the editor of the second edition of “Spider Genera of North America,” headed into the rain-soaked woods with several local enthusiasts and one family that had traveled from Los Altos for the event. A bioblitz in general is an attempt to catalogue all the living species within a certain area and and time period, usually a single day. The Hopland Research and Extension Center, located at at 4070 University Road, hosts an annual bioblitz that includes lectures and naturalist activities like specimen collection, nature journaling, and drawing pictures of plants and animals encountered on the grounds of the property. There is a variety of activities for children, professional scientists, and amateurs at all levels. This year, special topics ranged from bats and birds to native plants and a variety of bugs. The research and extension center, in Hopland, hosts a variety of educational events, including talks by scientists who study predator behavior, Native American artifacts, and, sometimes, entomology. 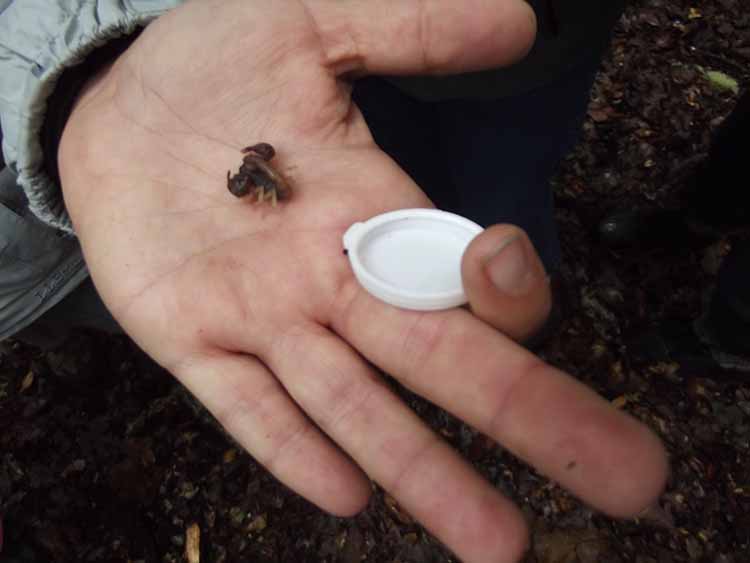 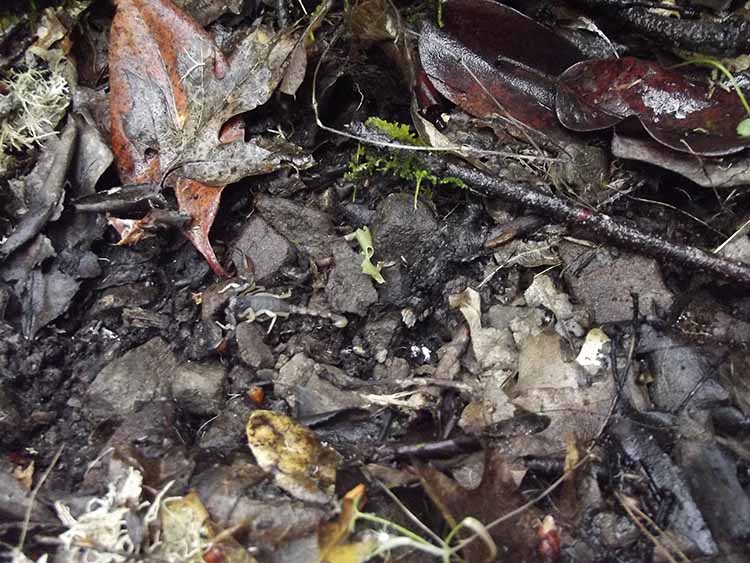 There is a small scorpion in the leaf litter here. 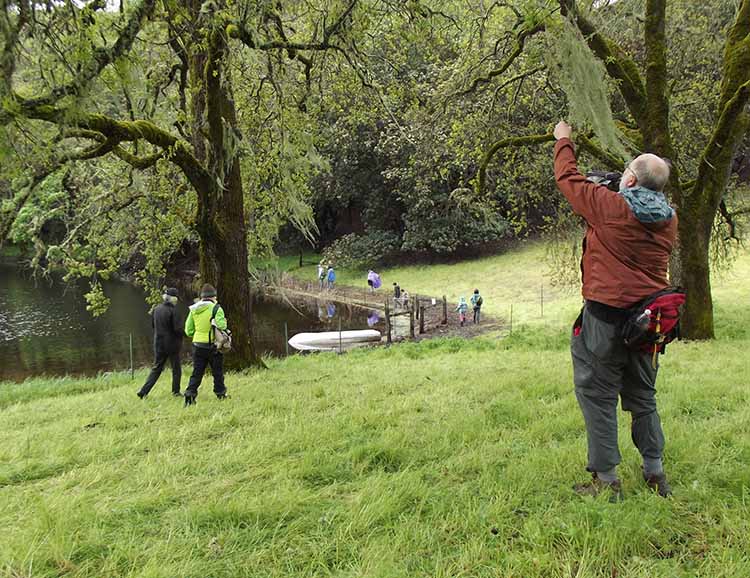 Walking to the pond. 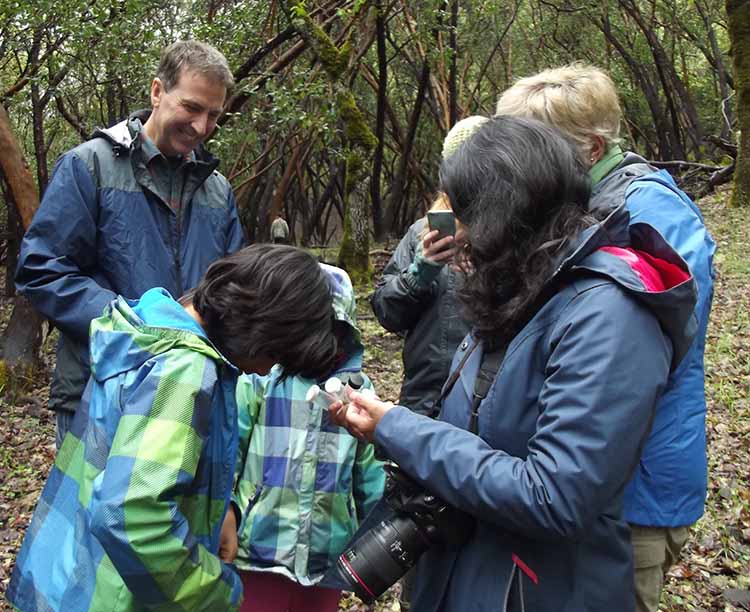 Gathered around the collection vials. 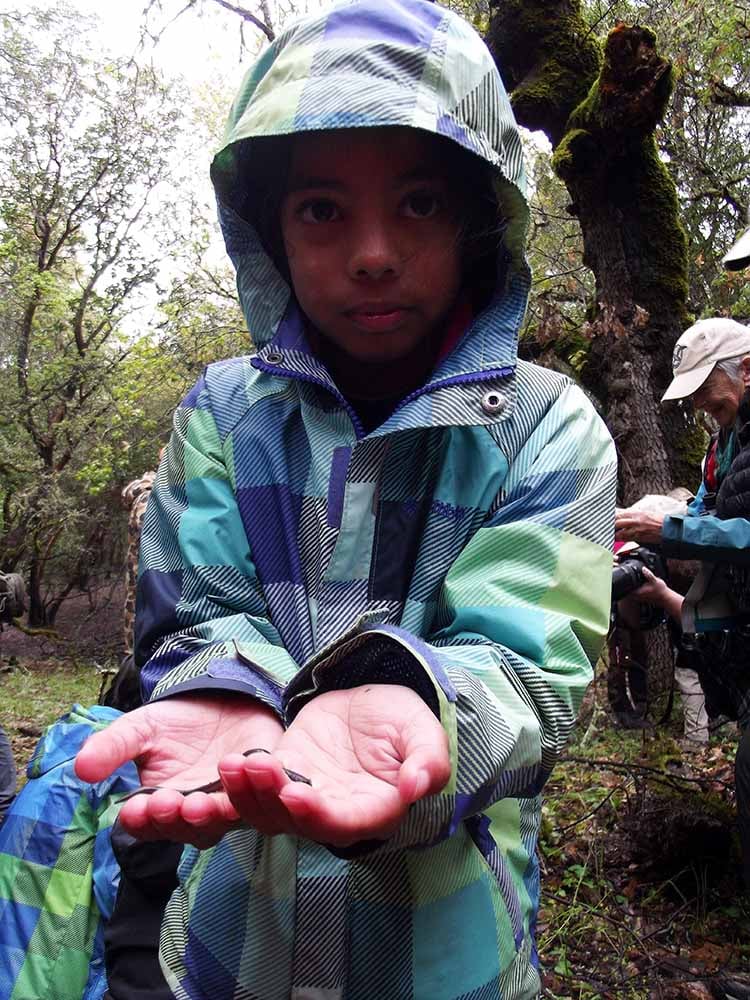 Parnavi Jain with a salamander.

As the group waited for the morning showers to subside, Esposito delivered a talk about arachnids, a class of animals that includes spiders and scorpions and is found in nearly every imaginable habitat, including salt flats.

“When people think of spiders, they don’t necessarily get a warm feeling,” Esposito acknowledged, before sharing a few of the behaviors that make arachnids so unique. “Ogre spiders” dangle from a blade of grass or a branch, clutching a web built like a fishing net in the their foremost pair of legs. The tiny Australian “peacock spider” conducts an acrobatic dance that involves flashing a tail that looks like an elaborate feathered mask. Male fishing spiders sometimes play a trick on females during courtship, bringing them a piece of junk wrapped up in silk and pretending it’s a juicy fly. In other species, males can expect to be cannibalized at the end of a successful courtship. “We don’t know very much about arachnids,” Esposito told her audience. She noted that a few species appear to be “kind of chewing on each other in a painful way” during their mysterious mating procedure.

The rain let up just as Esposito was demonstrating a variety of nets to capture arachnids in grass, leaf mold, and standing vegetation. One member of the audience, Prerna Jain, had come all the way from Los Altos with her son Prakrit, 12, and daughter Parnavi, 8, specifically for the entomology portions of the bioblitz. She poured herself a cup of tea and strolled into the woods as a child called out, “Mom, we found a scorpion!”

Esposito held a small sub-adult male Uroctonus mordax, its claws and tail tucked close to its body. Prakrit noted that the name means “corrosive tail of murder,” though Esposito said that if the animal stung her, “It would be like getting pricked with a thumbtack. He’d be more likely to pinch me,” with his claws. This not-so-murderous variety of arachnid is also known as the Western Forest Scorpion.

The Uroctonus mordax was plentiful on the morning of April 8, as were slim gray salamanders, which often shared space beneath the damp logs with the mildly venomous invertebrates. Jain watched calmly as another small gray and brown scorpion attempted to scurry up Prakrit’s sleeve. Parnavi clamored for her turn to hold the creature in her palm before her brother scooped it into a vial. “He doesn’t let her be afraid,” Jain said, adding that whenever his little sister is frightened of animals or thunderstorms, Prakrit tells her a story about it, so she becomes interested and loses her fear. “Your brother has three scorpions in his pocket, doesn’t he?” Jain asked her daughter, as she snapped a picture of a glossy juvenile. Esposito said this specimen appeared to have recently molted for the first time. Scorpions give birth to live young, in batches ranging from two to 120.

While the Western Forest scorpion’s venom is not particularly harmful to humans, other scorpions produce up to 200 varieties of venom. During her talk, Esposito gave several examples of research projects where scorpion venom is being studied for possible medical uses, ranging from fighting staph infections to helping brain surgeons identify tumors.

There is plenty of work to be done in the field of arachnology, as new species are being discovered all the time. A “trogloraptor,” or “cave robber” spider, was discovered in southwest Oregon in 2012. Just last month, two researchers from the San Diego Natural History  Museum published their discovery of a softball-sized cave spider in the Sierra Cacachilas mountains of Baja California.

As Prakrit knelt in the leaf litter at Hopland, Hannah Bird, the extension center’s community educator, interviewed him briefly for a Facebook live segment. What is it that he likes so much about insects, she wanted to know. Prakrit paused. “There are just not enough birds and mammals,” he told her, before turning over another sodden log to make his next discovery.