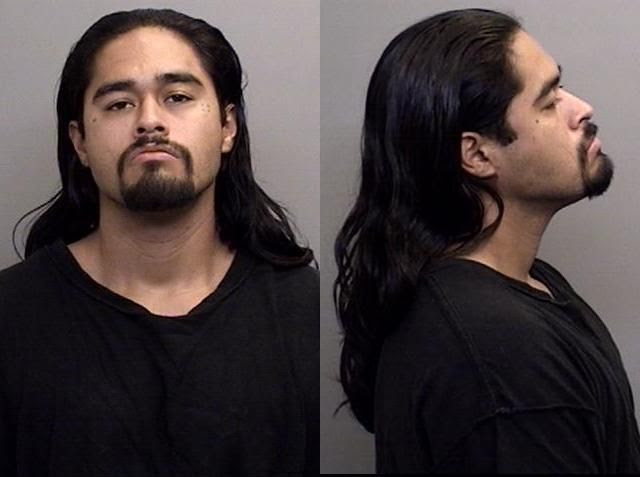 Jeffrey Joaquin, from the MCSO

UPDATE, 8:35pm — The suspect in the shooting of a Round Valley tribal police officer this morning, Jeffrey Joaquin, is now in custody. Lt. Shannon Barney of the Mendocino County Sheriff’s Office said he believes tribal police took suspect into custody around the time of the MCSO shift change on Tuesday afternoon, and that he would be booked at the county jail this evening.

MCSO released a “BOLO” (“Be on the lookout”) for Joaquin after this morning’s incident.

Barney also stated that he believed that both the tribal police officer and Joaquin were uninjured, although Joaquin was shot at twice during the morning’s incident, with a shotgun according to the press release. He noted that deputies are relieved “any time we can bring in a suspect without additional violence.”

The MCSO is leading the investigation into the shooting, but Barney added that right now law enforcement officers “don’t know the specific motivation or intent” behind the shooting.

Deputies plan to speak with the suspect and will release further information about the charges on the morning of March 22. We will update as more information becomes available.

The incident began around 10:00am this morning when a homeowner on the Round Valley Reservation called in saying that an armed and “unwanted” man, allegedly Joaquin, was at the residence. Two tribal police officers responded. The press release goes on to explain that when they spotted Joaquin they ordered that he drop his weapon, but that he did not comply and instead shot at an officer with a shotgun.

The gun was apparently loaded with birdshot, and at a distance of about 50 feet, the officer was struct by a pellet, but not harmed. An officer then fired two shots at Joaquin, who had ducked behind a car. Joaquin then allegedly raised his arms, as if to surrender, but then fled.

Where it was that he was later apprehended is uncertain.

MENDCOINO Co., 3/21/17 — Earlier today a man, identified as Jeffery Joaquin, 22, allegedly shot at a Round Valley tribal officer with a round of birdshot, according to a press release issued by the Mendocino County Sheriff’s Office (MCSO). The officer was uninjured due to the distance, but returned fire with his own shotgun as Joaquin hid behind a vehicle, it is unclear if he was struck.

Joaquin fled the scene and is still at large. The press release lists the charge against Joaquin as attempted murder, however the release also says that he is wanted for “questioning.”

The full press release is below:

Synopsis: On 03/21/2017 around 10:20 AM the Mendocino County Sheriff’s Office received a report from the Round Valley Indian Tribes, Tribal Police that they had responded to a report of an unwanted and armed subject in the 22500 Block of Refuse Road in Covelo.  The report to their agency was phoned in by a home owner, living on the Reservation, who advised the suspect, 22 year old Jeffery Joaquin, was armed and Tribal Police were requested to remove him.

Around 10:00 AM two Tribal Police Officers responded, one at the front of the residence and one in the rear of the residence.  The Officer in the front of the house observed the suspect in the driveway as he approached and saw that he was armed with a shotgun.  The Tribal Officer exited the vehicle with his duty issued shotgun and demanded Joaquin “drop his gun”.  According to the Officer, Joaquin fired one round at the Officer with what appeared to be “birdshot”.  The Officer returned fire, shooting two times at the suspect who had hidden behind a vehicle.  Witnesses yelled at Joaquin to drop the firearm at which time he did.  He removed his shirt and placed his hands into the air, as if to surrender, before fleeing in a west bound direction on foot.  He was last seen westbound when the Tribal Officers lost sight of him.

The Mendocino County Sheriff’s Detective Unit responded to investigate the case.  Joaquin is currently being sought for questioning related to this case.

Joaquin is described as being 5’08” tall, weighing approximately 175 pounds, having black hair and brown eyes.  He was last seen wearing dark colored jeans with no shirt.  If anyone has information about the where abouts of Joaquin please contact the Sheriff’s Office Dispatch Center at 707-463-4086.

One thought on “Man who allegedly shot at Round Valley tribal officer in custody; officer was not injured”