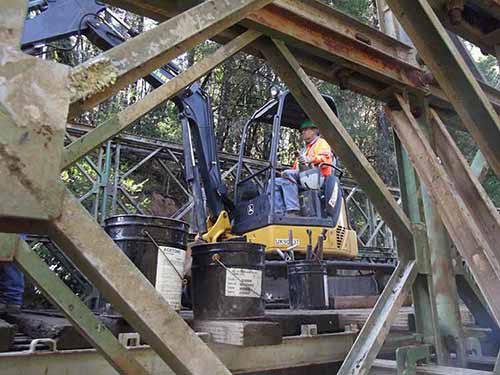 A crew member operating a crane.

Update: as of the afternoon of March 10, the road is now open!

UKIAH 3/9/2017 — On the morning of March 8, a spring day that was still chilly in the shadow of a thickly wooded mountain, a crew of county and private workers was straining on giant wrenches as they assembled a Bailey Bridge over the sinkhole on Orr Springs Road, about five miles west of Ukiah. The Mendocino County Department of Transportation and Green Right O’ Way Constructors, a private contractor out of Willits, were working on putting up the second tier of five-foot high trusses on the sides of the bridge on Wednesday morning. When it is finished, the bridge will span 150 feet, with approximately 50 feet on resting on the remaining portions of road on either side of the chasm.

A massive sinkhole opened up in the road due to a landslide, on Feb. 21, 2017. About two car lengths long, the chasm immediately made the road impassable and unsafe. A complete repair will have to wait, and is predicted to cost more than $1 million. In the meantime the county has been working on this temporary measure.

Mendocino County Department of Transportation Director Howard Dashiell declined to provide a specific date for the completion of the bridge, saying “My answer is going to continue to be, when it’s done and when it’s safe.” As soon as he publicizes a specific date, he fears that “People will be calling me up saying, I planned it, you said then, I planned my wedding around that. Yeah. I’m not going to say.” He also wants the bridge to be solid enough that it could last another winter, if necessary.

The Bailey Bridge is designed to bear a forty-ton load. However, Dashiell decided he would only allow vehicles of half that weight to cross the bridge that is going up on Orr Springs Road. He explained that he calculated that twenty tons produces a load of 1,000 PSF (pounds per square foot) on the soil, and that “Even the poorest silt clay soils…that are saturated, can take 1,000 PSF.” Twenty tons is about the weight of a school bus. Big garbage trucks and full-sized, fully-loaded water trucks are too heavy to use the bridge.

“I know, it’s a bummer,” Dashiell acknowledged, “but if we drive something over it that’s too big and it breaks, then nobody’s going to get to go through.” Dashiell had an appointment later that morning with a geotechnical engineer to determine when to bring a drill to the site, in order to assess the stability of the soil. He may change the amount of weight the bridge can take, based on the results of that analysis, but said that “Until I know better, I am assuming the worst.” He invited this reporter to “Look what happened to that soil right there,” and gestured to the chasm, still littered with splintered trees and chunks of asphalt with yellow lines painted on them.

Dashiell estimated that work on the bridge will likely cost a little more than $135,000, though the majority of that appears eligible for reimbursement from the Federal Highways Administration. “The assumption is we’ll get 88.53 percent” reimbursement, he said, adding that the Mendo County Dept. of Transportation’s budget is such that “We can wait to get reimbursed. Hopefully, that won’t be too many months away.” The contract with Green Right O’ Way is for $30,000. The firm was one of six companies that bid on the project. Bids ranged from 21 percent to 0 percent markup from prices determined by the California Department of Industrial Relations.

Bailey Bridges are a kind of portable, prefabricated, steel truss bridge, invented in the early 1940s by an English civil engineer named Donald Bailey. Bailey was later knighted for the role his invention played in the Second World War, allowing the Allies to move quickly across Italy and France without having to stop to build whole bridges. The parts of the bridges are interchangeable, so damaged components are easily replaced. In theory, each section can be carried by four infantrymen, though the crew on the steep slope of Orr Springs Road avails itself of heavy machinery. Eleven men were working on the bridge on Wednesday morning, with the county and Green Right O’ Way contributing four men each to the crew, plus three engineers and administrative workers from the county.

“The military will take a unit and literally train them over and over, because they’re supposed to do these in battle,” said Dashiell. In addition to lacking a military unit that does nothing but train on building bridges all day, crews are constrained by pedestrians. With a section of the road missing, the trip to  Ukiah from Orr Springs Road has gone from an hour and a half to easily two hours in some cases. As a solution, people have taken to driving up to the break in the road, walking across and getting picked up. Some residents park a second car on the Ukiah side of the road, and drive into town after a brisk stroll on Orr Springs Road.

When the Mendo Voice arrived at the site shortly after 10am, two men were walking up the hill from the Ukiah side to meet another group of people who were giving them a ride further up the road. When the Mendo Voice left, about an hour later, a woman walked through the work site to the Ukiah side, carrying two bags. “It slows down the crews because they have to stop” for safety reasons, explained Justin Brandt, an engineer on the project. Pedestrian trips of “five minutes start to add up, throughout the day.”

There are a couple of unconventional things about this bridge, one of them being that it is composed of parts from two Bailey Bridges belonging to the county. This is why motorists will notice that some sections are green and some are gray. Dashiell estimated that one of the bridges had been in the county’s possession “forever,” while the other was purchased in 1997, to go over Robinson Creek. One of them was used on the “bottomless culverts” of Flynn Creek.

Another unusual aspect of the bridge is that it is being built on a slope, which necessitated foundation plates on the downhill side. The site also had a super elevation, which caused it slope from side to side as well. 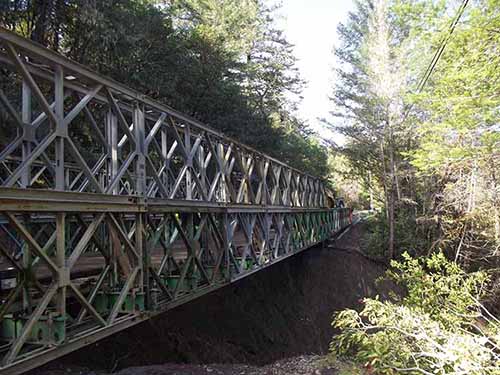 The bridge across the sinkhole.

A crew member operating a crane. 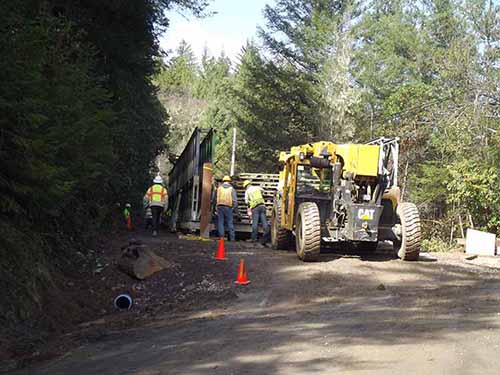 Crew and equipment at the site. 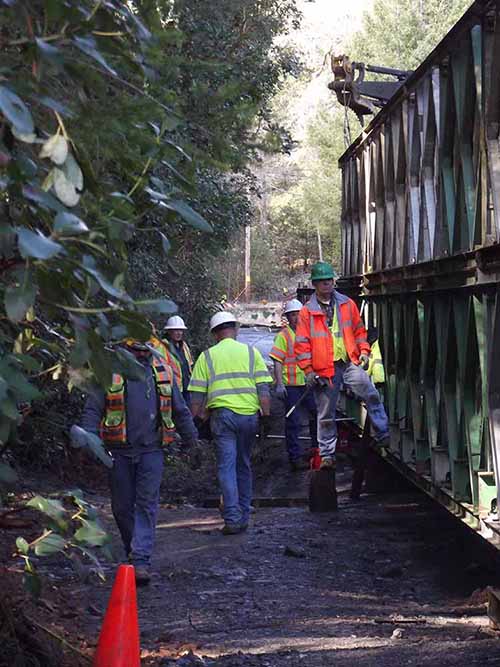 Crew members working on the bridge. 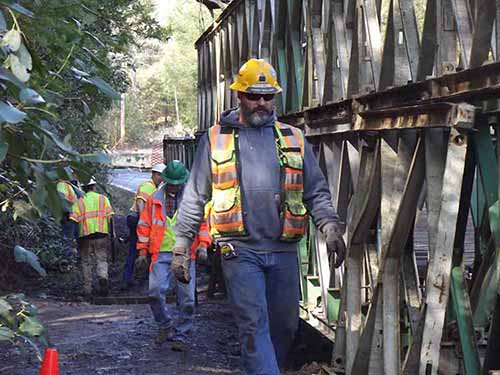 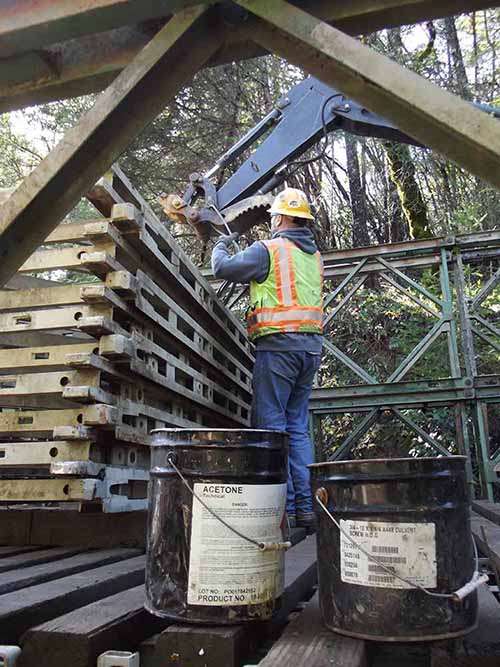 Bray fastening a load onto some equipment. 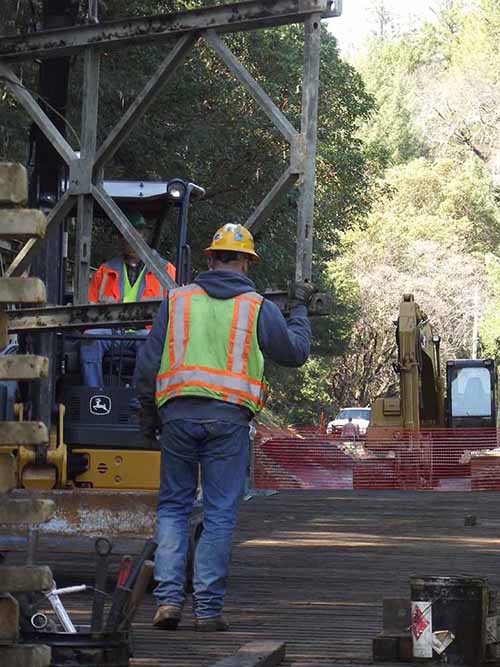