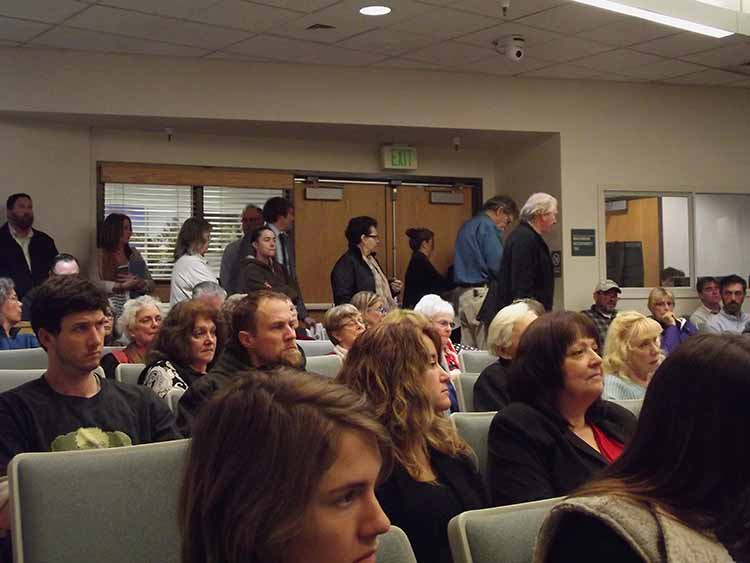 People filing up to the table in the back of the chambers to fill out comment forms at the Mendocino County Board of Supervisor's chamber. 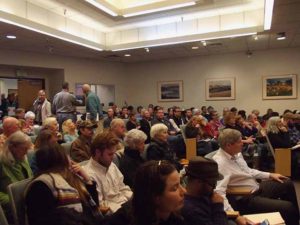 The Board of Supervisor’s chamber packed to capacity.

Editor’s note: A less detailed version of this article ran this morning. The article has been thoroughly updated with many details from yesterday’s meeting.

UKIAH 2/8/2017 — The board of supervisors chambers were packed to full 130-seat capacity at the regular supervisors meeting Tuesday. Attendees overflowed into the hallway or a neighboring conference room, where they could watch the proceedings on large TVs. Inside the chambers, the crowd burst into unsanctioned applause at one point, with a man in the audience yelling, “That’s huge!”

The topic, of course, was weed — specifically, the proposed medical cannabis cultivation ordinance, which would regulate how, where, and who could grow cannabis, and which is very close to being finalized. Several changes were made to the proposed law, with both the broad contours and the details of what legal cultivation in Mendo would look like becoming increasingly clear.

A good number of attendees filed to the podium to tell the supervisors what they thought about the latest development in the proposed medical cannabis cultivation ordinance. On January 19, the Mendocino County Planning Commission voted 5-2 to recommend that the board adopt the ordinance, with a list of mitigations. The board meeting on February 7 included a lengthy discussion about the commission’s resolution. At the end, the supervisors gave direction to county staff about how to further clarify the language of the proposed ordinance. The board will likely make a final decision about adopting the ordinance by March 7. However, all three supervisors involved in deliberations said they would be willing to make a decision earlier at a special meeting, if the ordinance is in good enough shape before a month elapses.

Included in the planning commission’s resolution were recommendations calling for new ordinances, including a woodland protection ordinance and an expanded grading ordinance. These ideas have been championed by environmentalists but questioned by others. Devon Jones, executive director of the Mendocino County Farm Bureau, a non-profit organization representing the interests of approximately 1200 farmers and ranchers, said she had “concerns about predicating this ordinance on the development of future ordinances.” She also pointed out that the county already has a grading ordinance, saying, “I think the biggest issue with grading in this county has to do with lack of enforcement.” She also expressed concern that if growers have to pack up and leave in two years — as they would under the proposed two-year sunset clause for cultivation sites in small rural residential zoning districts — a large number of permittees would be pushed onto ag zone property.

The topic of enforcement came up again in the context of a lawsuit, filed Monday by attorney Larry Rosen on behalf of a group of dispensary owners and growers. The lawsuit challenges the legality of Measures AI and AJ. Voted on in this last election, Measure AI imposed a tax on cannabis businesses, while AJ was an advisory measure that asked voters if they wanted the revenues used for several purposes, among them enforcing cannabis regulations. Echoing a similar suit filed against the city of Ukiah, the group claims that this dual-measure package side steps California tax law. McCowen suggested that enforcement will likely have to be paid for out of the reserve fund. If the county wins the lawsuit, that money would be replaced by revenue raised from the tax. “We will have enforcement,” First District Supervisor Carre Brown declared.

The cannabis discussion started a little after 10:00am, and lasted until shortly after 5:00pm, with an hour and a half break for lunch and a couple of shorter mercy breaks. The decision that led to the joyous display was one dealing with a requirement that growers show proof of cultivation prior to 2016 to receive cultivation permits. Growers and attorneys have consistently expressed concern that such a requirement would result in self-incrimination[footnote]Footnote: The Fifth Amendment to the Constitution protects against self-incrimination.[/footnote] in an environment where the federal approach to cannabis regulation is uncertain. Many growers balk at the idea of providing documentation that they have been engaged in felonies, especially if such evidence were to be easily be subpoenaed by the feds. Yesterday, the board decided to have county staff simply examine the evidence, attest that they had seen it, and provide the permits without keeping the possibly incriminating photos or documents on file.

The supervisors differed slightly from the planning commission in determining not to refer every permit to the California Department of Fish and Wildlife (CDFW). “Since the staff at the department of agriculture all has biology degrees or a natural resource degree, we feel confident that we could make that decision,” explained Diane Curry, the interim Agricultural Commissioner. Permits would be referred to CDFW only when the Ag Department finds it necessary.

This change in the proposed mitigations was one of several decisions that seemed to be in response to a “coalition letter” presented to the board, and signed by a truly broad and fairly unprecedented array of Mendocino activists and interest groups, including: Paul Trouette and Hal Wagenet of the Mendocino County Blacktail Association; David and Ellen Drell of the Willits Environmental Center; Casey O’Neill, vice president of the California Growers Association; Traci Pellar, of Mendocino Wildlife Association; Julia Dakin, of the Small Farmers Association; Allan Harris, representing coastal interests; and attorneys Christopher Neary and Hannah Nelson.

In another bid to avoid getting entangled with the purview of other agencies, the board also decided they would not allow timberland conversion in order to grow pot. Timberland conversion permits are issued by CalFire, and, as Second District Supervisor John McCowen remarked, the board finds “No need to involve ourselves with the CalFire review process.” Conversions on parcels where pot is being grown would be permitted, as long as the cultivation site is already on a portion of the property that does not require the removal of trees.

Under the proposed new rules, outdoor and indoor grows would be required to relocate from several residential zones. The board also assigned county staff the huge task of determining “overlay zones,” where cultivation would be permitted in residential areas. They set a timeline of two years for this process. Fourth District Supervisor Dan Gjerde even suggested the possibility of coming up with a new zone. Stark cultural differences in various parts of the county have become explicit during the process of regulating cannabis. Residents of Ukiah’s Deerwood, El Dorado and Rogina Heights neighborhoods have spoken vehemently against growing pot in their area, while many growers in the more rural residential neighborhoods of Laytonville insist that they are good neighbors.

If the proposed ordinance is adopted, medical cannabis cultivation permits would not be issued in areas zoned for rural residential parcels smaller than two acres, residential parcels smaller than three acres, or anywhere in the suburban residential and rural community zones. It is not clear yet where the growers currently operating in sunset zones (zones scheduled to be phased out of legally permitted production) will go at the end of two years.

In a slightly unconventional move, McCowen, who is chair of the board, took an informal poll of the audience about their thoughts on organic certifications.

Before a diminished after-lunch audience, McCowen invited the crowd to raise their hands if they wanted the certified Mendocino County grown stamp of approval to be applied only to cannabis that had been farmed according to principles that mirror those of the USDA organic certifications.

The proposed ordinance already contains a provision that would create a “sustainably farmed” certificate that does just that, but the question of the Mendo-grown distinction was not yet settled. About two-thirds of the crowd raised their hands — and the board voted to require that the Mendo grown label also abide by sustainable growing practices. To growers unwilling to go organic, McCowen said, “You can still grow it, but you can’t put our name on it.”