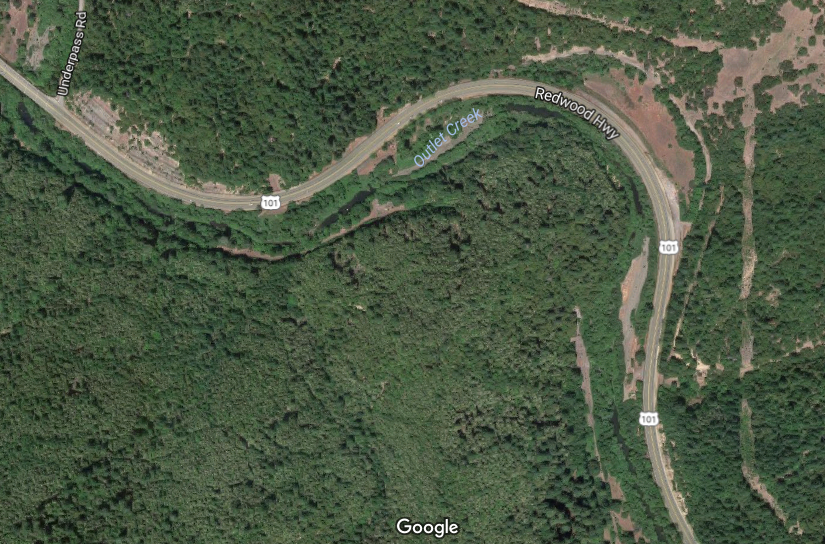 MENDOCINO Co., 1/12/17 — One motorist is dead and another injured after their car ran off Hwy. 101 and into Outlet Creek early last night. According to a statement issued today by the California Highway Patrol, passenger Natalie Griffin, 19 of Castro Valley, and the deceased driver, 19 of Alameda, drove a 2004 Toyota Corolla off the highway at about 7:30pm last night. The car crashed into the creek which is swollen and moving fast from the recent rains. The car was fully submerged in fast moving water, about 100 yards from shore.

Griffin managed to climb out of the car and spent the night clinging to a tree. But the driver remained in the car. The accident occurred near mile marker 57, around the junction of the 101 and Hwy. 162. At dawn Griffin swam across the river, climbed up the bank and flagged down a passing car. Griffin was transported to Frank R. Howard Memorial Hospital in Willits.

At around call at 8:20am, the CHP received a call. Officers of the CHP, and the MCSO responded, as did the Little Lake Fire Department’s with their swift water rescue team. They attempted to rescue the driver, who remained trapped in the vehicle. The operation took several hours but eventually a rescue swimmer was able to extract the driver, who was pronounced dead at the scene. Though the name of the driver has been released we are withholding it until we are certain the family has been notified.

Officers were then able to extract the vehicle with a tow truck.

See our coverage of the incident as it occurred, and the full press release here:

On January 12, 2017, at approximately 8:19 AM, the California Highway Patrol received a report of a traffic collision on US-101 in Mendocino County, near milepost marker 57.00, involving a vehicle which had run off the highway and was in Outlet Creek.  One of the vehicle’s occupants had made their way to the roadway and had waved down a passing motorist.  It was soon discovered the collision had occurred at approximately 7:30 PMthe night before, and one additional occupant was said to be involved, and possibly still inside the vehicle.

The vehicle was almost fully submerged in the swift moving current of Outlet Creek, approximately 300 feet from the shore, and was not visible from the highway.  Little Lake Volunteer Fire Department Swift Water Rescue Team responded to the scene.  A rescue swimmer was able to make it to the vehicle and confirmed there was a second occupant, the driver of the vehicle still inside.  The driver was extricated and pronounced deceased at the scene.  Swift Water Rescue was then able to attach a tow truck cable to the submerged vehicle, and the vehicle was recovered from Outlet Creek.

The passenger, Natalie Griffith, had spent most of the night stranded on a tree in the river after climbing out of the submerged vehicle.  Upon first light, she swam to shore and climbed up the embankment to the highway where she obtained assistance from the passing motorist.  The passenger was transported by ambulance to Howard Memorial Hospital in Willits for treatment of minor injuries and exposure.

This collision remains under investigation by the California Highway Patrol.