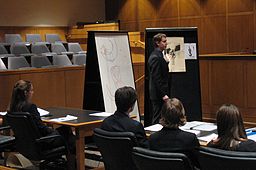 MENDOCINO Co., 1/25/17 — Ever wanted to watch a high school students argue a legal trial in real courthouse? Well now’s your chance! The Mendocino County’s Office of Education invites the public to attend the semi-finals of the mock trial competition—where 80 kids from Laytonville, Ukiah, Fort Bragg, and the Developing Girls school will compete for “the Hon. Ron Brown County Mock Trial trophy and a chance to represent Mendocino County at the state competition in Riverside, California on March 24-26.”

The students will all play different parts in a fictional trial concerning human trafficking and false imprisonment, and have been coached by local educators and members of the legal community. The fictional case was selected by the competition’s statewide coordinators, the Constitutional Rights Foundation, and highlights issues of “issues related to the Fourth and Fifth Amendments: protection against illegal search and seizure and against self-incrimination.” The competition is designed to help students learn about more about the law, critical thinking, public speaking, and better understand how legal systems, arguments, and participants in trials operate.

See more details in the full press release below:

The Mendocino County Office of Education (MCOE) invites the public to attend this year’s semi-final mock trial competition to be held January 28 and February 4 at the Mendocino County Courthouse in downtown Ukiah. Approximately 80 students from four local high schools will attempt to out-argue each other for the honor of winning the Hon. Ron Brown County Mock Trial trophy and a chance to represent Mendocino County at the state competition in Riverside, California on March 24-26.

According to classroomlaw.org, “Mock trials have proven to be an effective learning tool…. [Participating in mock trials] helps [students] understand the law, practice critical thinking, and gain greater confidence with public speaking by assuming the roles of attorneys and witnesses in a fictional criminal or civil trial. Participants experience first-hand the difficulties that judges, lawyers and juries face in determining which facts are relevant and what legal arguments are effective.”

Educators and members of the legal community volunteer their time to coach teams and officiate during the competition. Local participants include students from Developing Virtue Girls School, coached by Rianne Kravitz and Matthew Finnegan; Fort Bragg High School, coached by Josh Brown, Tara Larson, and Peter Kafin; Laytonville High, coached by Bruce Potter, Elizabeth Norman, and Elina Agnoli; and Ukiah High, coached by Matthew LaFever, Sergio Fuentes, Colin Morrow, Alexander Rich, and Zach Stephens. MCOE funds and coordinates the County Mock Trial program, so the program can be offered to students at no cost to them.

This year students will portray all key roles in the fictitious case People v. Awbrey, the trial of restaurant owner Cameron Awbrey, who is charged with human trafficking and the false imprisonment of Lin Stark, an immigrant from the fictitious country of Tanterra. The statewide coordinators of mock trial, the Constitutional Rights Foundation, developed the case, which involves issues related to the Fourth and Fifth Amendments: protection against illegal search and seizure and against self-incrimination.

To learn more, attend the mock trial event on January 28. The first round begins at 9:30 am, and the second round begins at 1:00 pm. Semi-final competition will continue the following Saturday, February 4 at 9:30 am, with the top two teams advancing to the final round of competition to be held in Courtroom H beginning at 1:30 pm. The final awards ceremony is scheduled to begin at approximately 3:30 pm.

For more information about the County Mock Trial program, contact Carolyn Brown at the Mendocino County Office of Education, (707) 272-8682.