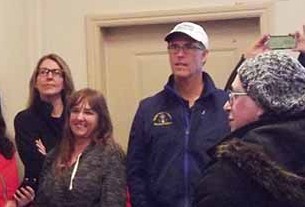 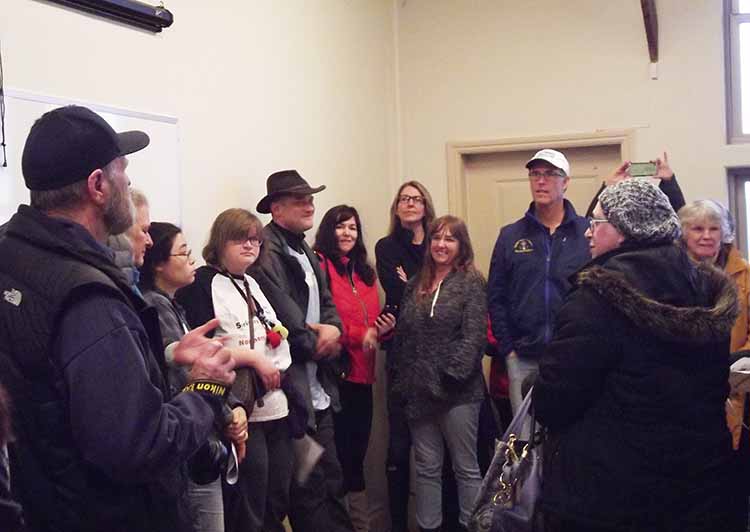 UKIAH 1/23/2017 — The North Coast’s Congressman, Jared Huffman, has drawn national attention in the past couple weeks for deciding not to attend the inauguration of President Donald Trump as a protest. Instead he said that he would dedicate inauguration day to good works in his home district. So it was that Friday instead found him and his wife Susan visiting a small, brightly lit room behind Yoga Mendocino on Monday afternoon to volunteer with Street Medicine, a program that offers free medical care to homeless people in Ukiah. Doctors, lawyers, and a professional musician were among the representative’s fellow volunteers, taking inventory of donated shoes and clothes or packing over-the-counter medications into individual packets for patients. 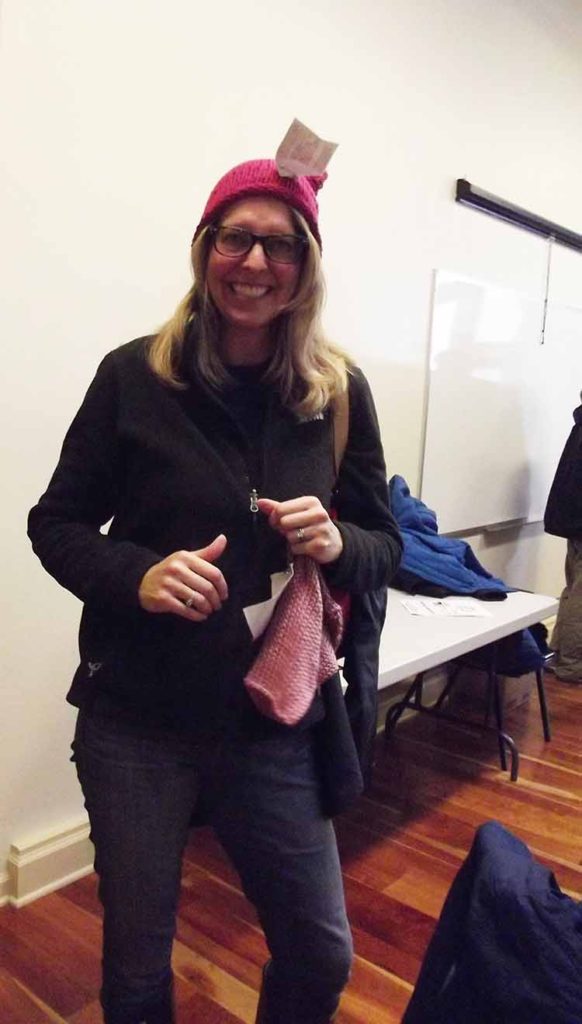 Susan Huffman wearing one of the pussyhats made by Camille Meeker

Dr. Noemi Doohan, who spearheaded the volunteer-based program as a pilot project two years ago, thanked the congressman for choosing to volunteer for Street Medicine, saying, “There is nobody in the community who is suffering and needs us more than unsheltered homeless people.”

Huffman noted that the week “began with honoring Martin Luther King on Monday and has culminated on Friday with the inauguration of Donald Trump as president. We live in a pretty complicated world…there are some lessons from the first part of the week that can help us process the end of the week…for me, one of the key lessons that Dr. King taught is that we cannot despair…I don’t see any despair in this community, in this room. I just see people stepping up to take care of those who really are in desperate need.” He concluded his remarks by saying, “Hats off to you. I would take my hat off, but I have hat hair.”

Huffman left with more hats than he came in with, after a constituent named Camille Meeker presented him with two pink pussyhats she had made herself. “I borrowed a knitting machine and I made 89,” said Meeker, as she waited for a moment to have a few words with the representative. Huffman thanked her, telling her to “look for some Huffmans in these tomorrow at the Santa Rosa women’s march,” which he planned to attend with his wife and daugher on January 21. 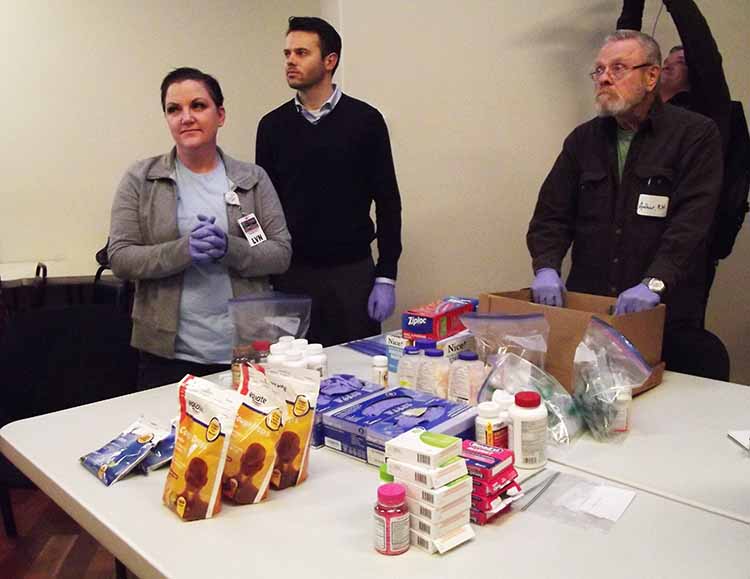 Much of the volunteer work involved clothing of all kinds. The medical and social work professionals who provide care for homeless patients do so at the temporary emergency homeless shelter at the south end of Ukiah and at Plowshares, the soup kitchen in Ukiah, which serves as a hub for a variety of homeless services. Charlie Selzer, a local piano player and singer, was lugging a large bag of donated clothing away from a long table and into a back room. Asked what his volunteer job was, he said, “I take everything out of the bag and then I write descriptions of the items, and then I put them back in the bag.” He noted that Street Medicine is the type of volunteer work that is specific to doctors, but that “Things like inventorying 70 bags of clothing, you don’t need a medical license for that.”

Ashley Burrell and Cooper DeMars, two attorneys specializing in federal Indian law, were taking inventory of donated shoes, examining their condition and noting the size and type of footwear. “We were excited that this event was available and that the congressman didn’t go to the inauguration,” Burrell said, laughing.

Huffman, who took a quick question about missing out on the inauguration party, said he planned to “listen to the speech on YouTube tonight or something,” but that he had seen enough of Mr. Trump and “the nihilistic gauntlet that he has laid down.” He added that “stuff like this, positive things, big and small, are the best way to respond.”

Kael Loftus, the Street Medicine program manager, agreed wholeheartedly. “I think a message of pulling together and confronting our problems, that’s exactly what we should be doing…rather than wringing our hands and drinking ourselves into a stupor over it.”

The congressman’s wife, Susan Huffman, whose day began with painting at Habitat for Humanity and wound up at an interfaith vigil for peace in San Rafael, also viewed the day of service as an antidote to despair. “I wanted to do something today,” she said. “I would have been down, and this is our counterweight, our way to make something good out of a down day.” Susan Huffman is a teacher, “but I don’t teach on Fridays, so I was like, I’m coming with you.”

After a few moments of describing her whirlwind tour of the Second Congressional District, her husband approached her with Meeker’s gift, saying, “These are pussyhats.”

“I’m so excited!” she replied, and pulled one onto her head before dashing off to the next event.

Huffman and Assemblyman Jim Wood will be speaking at a Town Hall in Ukiah on Friday, January 27 – see more details here.